The Sharjah International Book Fair provides an opportunity for manuscripts and rare books enthusiasts to view and purchase first editions of rare books and manuscripts, including a manuscript dating back to the 16th century AD. 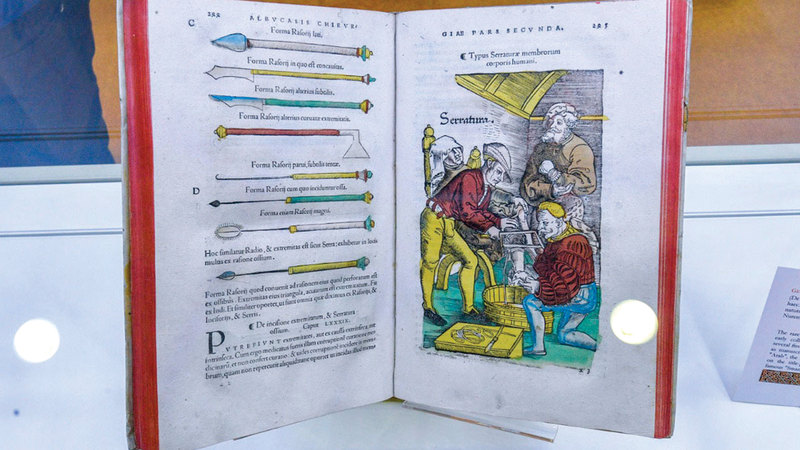 dating back to the 16th century

The Sharjah International Book Fair provides an opportunity for manuscripts and rare book enthusiasts to view and purchase first editions of rare books and manuscripts, including a manuscript dating back to the 16th century AD.

And the “Iktaya” publishing house, which is participating in the exhibition, displays a rare bundle of literary and scientific books and manuscripts, some of which were copied by hand, and some of them represent the first edition of the most important scientific books in medicine and physics, for scientists who were among the founders of these vital sciences. The official of the house, Muhammad Asif, told "Emirates Today", that the platform for manuscripts and rare books includes the manuscript of the book "Kamel" in the medical industry, by its author Ali bin Abbas Al-Majusi, written by hand in 1582 AD, and consists of 20 studies, on the theoretical and practical sides of the study. Medicine, the book was translated into Latin and circulated widely in Europe.

He continued: "Among the rare books is also the first edition of Ibn al-Haytham's book (The Views), which is one of the most important books in the history of the development of optics. The edition dates back to the year 1532 AD, and is presented for $140,000."

Ibn al-Haytham’s Book of Views is a physical encyclopedia, classified as one of the most valuable products produced by scientists in the field of optics. Ibn al-Haytham was classified as the greatest naturalist of the Middle Ages.

Asif mentioned that the third book is “Surgery” by Abu al-Qasim Khalaf Ibn Abbas al-Zahrawi, and it sells for $350,000.

He stressed that these rare books and manuscripts attract visitors of different nationalities, to view them, and obtain ticket photos next to them.