Caring for a vegetative husband for 17 years

China News Service, Cangzhou, November 6th (Wang Tian translated by Liu Qian) 17 years ago, her husband suffered a cerebral infarction and became a vegetable. In the past 17 years, facing a vegetative husband and two children, Wang Dachi, a woman from Liangjia Village, Lugongbao Town, Renqiu City, Hebei Province, stayed true to her. She used her weak shoulders to support her child and husband. 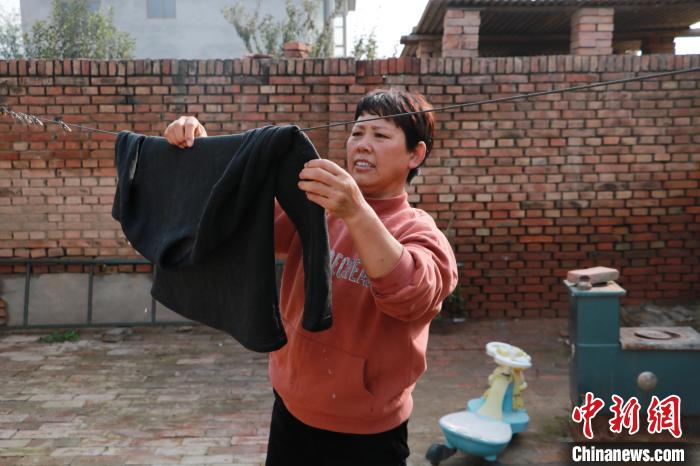 In the past 17 years, facing a vegetative husband and two children, Wang Dachi, a woman from Liangjia Village, Lugongbao Town, Renqiu City, Hebei Province, stayed true to her. She used her weak shoulders to support her child and husband.

On the afternoon of the 4th, when a reporter from Chinanews.com came to Wang Dachi's home, she was scrubbing her husband Liang Jintu's body.

"He (Liang Jintu) used to work hard, and he was very clever." Wang Dachi said, looking at her husband who was lying on the bed.

In 1988, Wang Dachi, who was 21 years old at the time, was introduced by someone to marry Liang Jintu.

After that, a pair of sons and daughters were born successively. In addition to taking care of the farmland in the family, Liang Jintu also helped people work everywhere, while Wang Dachi was the husband and wife of the family, and the family of four had a good time.

One late night in 2004, Liang Jintu suffered a cerebral infarction. Although he was rescued from the danger of his life, he became a vegetative person due to severe brain damage.

That year, Wang Dachi was 37 years old, and his two children were only fifteen or sixteen years old.

"At that time, I couldn't help crying all night, but I knew I couldn't fall, and if I fell again, this home would really be over."

The picture shows Wang Dachi drying clothes for her husband.

Liang Jintu fell ill, and spent more than ten years of savings at home to treat the illness.

Looking at the two children, Wang Dachi wiped away his tears and began to look for opportunities to work, working hard to make money.

"Seeing that I went home at night so tired that I couldn't stand up, my two children became more sensible. When I came home from school, they would cook for me and take care of their father." Wang Dachi said. She and her pair of children encouraged each other and walked past. The most bitter days.

"After Liang Jintu fell, many people persuaded me to find another in-law’s family as soon as I was young. I have never thought about it. The combination of two people means that the rest of my life will depend on life and death. He fell, How can I leave someone when they are most in need?" Wang Dachi said, taking good care of her husband and children is her greatest wish.

"When I was young, the most impressive thing was when my mother fed my father, a meal sometimes took several hours to finish. At that time, I wanted to grow up quickly to help my mother." Wang Dachi’s son Liang Zhizhong said, now we are grown up. In the future, we will change our guardian mother, so that her old life can live a happy life.

Wang Dachi’s persistence also touched the neighbors: life is difficult, the village committee declares for their family’s subsistence allowance, guaranteeing Liang Jintu’s medical expenses; the house is leaking, and the neighbors work together to help her repair the house; Some enthusiasts sent her rice, noodles, grains and oil...

"Wang Dachi has taken care of her vegetative husband every day for more than ten years. Her deeds have been praised by the villagers. Her dedication has infected many villagers and made the village style of our village more simple and kind." said Liang Suokun, party branch secretary of Liangjia Village.

Now that Wang Dachi’s sons and daughters are married, she no longer has to run around like before. Taking care of her husband every day has become almost all of her life.

"With him, we are still a whole family." Wang Dachi said.