Photographer Yan Ming: With the shutter closed, the story of a photo has just begun

Chinanews.com client, Beijing, October 26 (Reporter Ren Siyu) The faint light box on the top of Mount Tai, the stone statue of a military attache standing in the field, the boy facing the sky on a forklift in Fengjie, the young man looking up alone by the Yangtze River in Yichang...This is photography. The "Old Mountain and River" under the lens of Shi Yanming.   He started to touch the camera 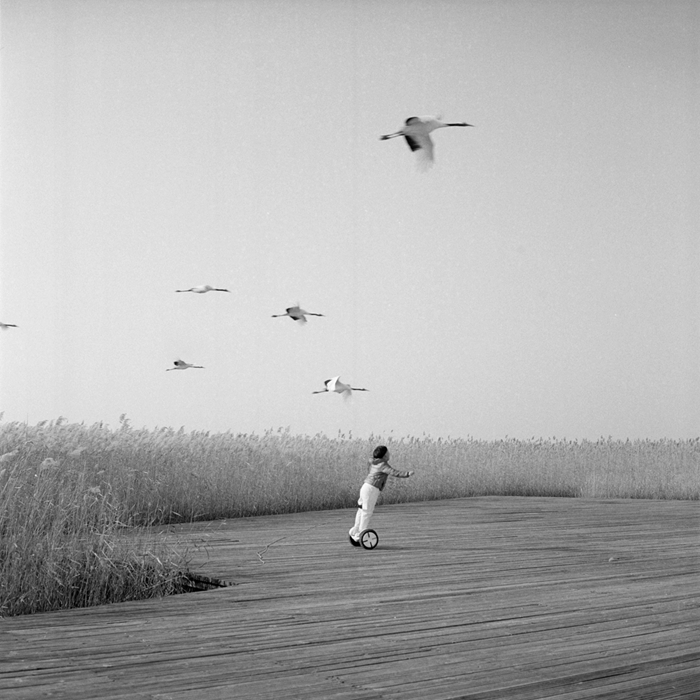 Chinanews.com client, Beijing, October 26 (Reporter Ren Siyu) The faint light box on the top of Mount Tai, the stone statue of a military attache standing in the field, the boy facing the sky on a forklift in Fengjie, the young man looking up alone by the Yangtze River in Yichang...This is photography. The "Old Mountain and River" under the lens of Shi Yanming.

He started to touch the camera at the age of 32 and won the Hou Dengke Documentary Photography Award. Yan Ming is also known as the "Poet Photographer". Director Jia Zhangke once commented that his photos are not records, not captures, but profound creations.

In the newly published photo collection "Yesterday Church", he selected 108 works shot from 2007 to 2021 that have never been officially assembled and published, "it is a summary of life's interpretation of life through photography for many years."

Every shutter is a farewell

After going through the status changes of middle school teachers, rock musicians, record company corporate announcements, newspaper reporters, freelance photographers, etc., Yan Ming has paid more attention to the disappearance and retention of the traditional humanities that are changing over the years.

He remembered reading a sentence on the Internet, "Those who have no attitude are small and fresh." It would be a shame if photography can give others less imagination.

In "Yesterday's Church", what impressed many readers is a picture of a Buddha statue that has been blurred due to thousands of years of weathering.

The weathered mountains and rocks ripple like the annual rings of time. Although the original features of the Buddha are no longer known, they have an extra layer of deterrence beyond exquisiteness.

Weathered Statue of the Buddha 2020

This photo was taken on a hilltop in Anyue, Sichuan. Yan Ming went there twice, and also specially found a bracket to raise the height of the camera, hoping to restore the Buddha image with a solemn and quiet image.

In his opinion, this photo does not need to explain anything by himself. The rocks and peaks in the picture have already conveyed the message.

There is also a photo of a statue dancing lightly in the snow. It was taken in front of a rockery in an ecological park in the remote area of ​​Jiayuguan. The dancing posture of the statue became lonely and arrogant because of the heavy snow, and that moment made his heart beat.

The shape of this statue seems to be a peacock dance. Yan Ming thought that there might be peacocks walking by in the garden. "Usually you don’t think it’s so beautiful or artistic, but it’s a coincidence that it snowed that day and it showed another kind of vigor. Son, it suddenly merges with the natural things."

For example, Bresson’s "decisive moment" theory, Yan Ming once put forward the concept of "decisive atmosphere", "I think that we Chinese see things are contextual, and atmosphere is a force usable in photography." The atmosphere is related to light, weather, The environment and so on are importantly related, and only when these elements are condensed in a photo can it be considered "good-looking".

When sharing his experience with young photographers, he often said that he must know before taking almost every photo.

"At that moment, you were like a knife-saver, and you selected a slice with a single knife." Although photography is only a moment, it should also convey information like a long video. "So the work of photography is in many preparations. These are all necessary to predict and wait."

Source: Photo courtesy of the publisher

There are stories before and after photography

The dignified square composition, the timeless black and white light and shadow, the implicit poetry and oriental charm, Yan Ming's works have a strong personal style, and his photography style and preferences are also a process of "slowly scouring".

"Yesterday Hall" included "Ran Love You", which was once hot on the Internet. It was taken in an abandoned prison overgrown with weeds in Yumen, Gansu. Someone added "Ran Love You" after the slogan "Strict Law Enforcement, According to". Yan Ming took a picture of the three words with his mobile phone and sent it to Weibo.

But he did not expect that this photo suddenly received tens of thousands of interactions from netizens, and many boys and girls discussed with each other in the comment area, trying to decipher the story behind it.

Yan Ming guessed that there might have been a naughty tourist with spray paint here. He might not be tall, and he still pads his feet when he writes the first character. The next three characters slipped down.

For him, this photo with only the slogan is actually hardly a work, because it is too simple, but the whole process is very interesting.

"Therefore, there are stories before and after photographs. For example, when strangers know each other and become friends, photographers don’t have to get serious works. The journey itself is a far away experience. Send out many stories, it will last a long time."

"The shutter is closed, and the story of a photo has just begun. The shutter, when the knife is lifted and dropped at the right time, one touch can be immortal. It is as light as dust, and as thrilling as life." He wrote in the preface.

Those who don't have an attitude are small and fresh

Nowadays, mobile phones, cameras, and photo editing software are becoming more and more popular. It seems that everyone can become a photographer. What is the persistence of being a professional photographer?

In Yan Ming’s view, creators should use images to truly express, “You can’t just show off your skills, you want to show your insights in your photographs. In fact, it’s okay not to write text or pictures. If you feel sorry for it, then your things are valuable."

He was very grateful for the opinions expressed by some of his predecessors at the beginning of learning photography. Photo is a carrier, and a camera is a tool. Art needs expression and communication. If you decide to use a camera to shoot, you must develop ideas and attitudes in the process.

After many years of walking and shooting, Yan Ming did not want to be placed in labels such as "documentary photographer". "I think there should be some development. In many cases, a single photo can completely move you, visually move you, and touch the spirit. At the level, this is what photography can and should do long ago."

And this is where he feels happy in the new book. Compared with the past, the new collection of works reflects more of his visual and spiritual shock, including some surreal landscapes and static content with more visual impact.

For example, the disco ball in the abandoned factory yard. Maybe it flashed in the club in the past, and the male and female employees danced and laughed under the lights, but under the sunlight at that time, it was lonely and regained light. The past looked at each other again.

"Photography is a momentary projection of your heart. Once you frame yourself, the other possibilities are gone," Yan Ming said, "This time, I have walked out a new visual possibility."