Daughter kidnapped? The party insisted on asking the police to write a note to persuade the remittance

Ms. Zhao gestured to the police to keep silent (video screenshot)   Upon receiving the news that "daughter was kidnapped", citizen Ms. Zhao's blood pressure came up instantly, and she was completely blank in her mind to remit 300,000 yuan regardless of the police's dissuasion...   On October 20, the Tiexi Branch of the Shenyang Public Security Bureau received such an alarm. The police successful 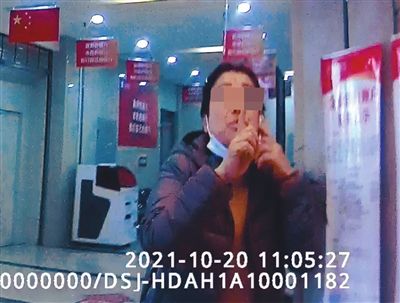 Upon receiving the news that "daughter was kidnapped", citizen Ms. Zhao's blood pressure came up instantly, and she was completely blank in her mind to remit 300,000 yuan regardless of the police's dissuasion...

On October 20, the Tiexi Branch of the Shenyang Public Security Bureau received such an alarm. The police successfully debunked the lies of the liar and stopped paying 300,000 yuan in time.

The woman received a call from her "daughter" "I was kidnapped"

At 11:00 on October 20, the Xingshun Police Station of the Tiexi Public Security Bureau received an alarm from a bank in its jurisdiction, stating that a lady named Zhao came to the bank in a panic, and eagerly asked for the remittance immediately, and handed a note saying Her daughter was kidnapped.

After receiving the alarm, Zhang Xuebo, deputy head of duty at Xingshun Police Station, immediately led the police to the scene.

At the bank, the police found that Ms. Zhao's mobile phone was still on, and the caller on the screen showed "daughter".

When the police came to Ms. Zhao, she resisted and asked the police to keep their distance and not to speak.

As a last resort, the police had to use paper and pen to communicate with Ms. Zhao.

After repeated exchanges, the police learned that Ms. Zhao received a call from her daughter's phone number on the morning of the 20th, saying that she had been kidnapped.

Later, a man said on the phone that a ransom of 300,000 yuan was required, and Ms. Zhao was not allowed to hang up, and immediately went to the bank and remitted 300,000 yuan to the designated account according to his request, otherwise he would tear up the ticket.

Ms. Zhao went blind all of a sudden, her brain was blank, all she was thinking about was how to send money as soon as possible to ensure the safety of her daughter.

Since Ms. Zhao couldn't hang up the phone, she couldn't call her husband or close relatives for help.

The police confirmed that the kidnapping news was untrue

The police contacted their husband and learned that their daughter was at a friend's house and had not been kidnapped.

At this time, Ms. Zhao’s daughter also called, saying that she had fallen asleep at a friend’s house, did not hear the phone ring, and was not kidnapped.

After learning that her daughter was safe and sound, Ms. Zhao woke up like a dream and sat slumped on the ground.

Under the explanation of the police, Ms. Zhao realized that she had been scammed by telecommunications. The scammer used software to set the mobile phone number she used as the memo name of Ms. Zhao's daughter.

When the police received the call from Ms. Zhao to identify her identity, the other party immediately hung up the phone.

"If it is a while later, my family will be gone."

Ms. Zhao regretfully said: "After receiving the call, my blood pressure came up immediately. I didn't even bother to tell if it was my daughter's voice on the phone, so I hurried to the bank to prepare for the remittance. Thanks to the police and the bank. Staff, if it were not for you, I would have been deceived by scammers."

Afterwards, the police sent Ms. Zhao to her daughter’s friend’s house, where the mother and daughter met, and again conducted anti-fraud propaganda and education on Ms. Zhao and her family, and instructed them to download the “National Anti-Fraud Center” app. I hope that they will study anti-fraud knowledge attentively, so that they will not listen, believe, or transfer money, and keep their money bags.

Be sure not to trust, disclose, or transfer money

Recently, many citizens dialed the news hotline to report that they received telecommunications fraud calls. They all showed that they were from overseas numbers such as "Vanuatu" and "Tonga". The content of the fraud was exactly the same. "We belong to the Shenyang Public Security Bureau. Fraud, in order to cooperate with the investigation and clean up yourself, please remit 300,000 yuan to the security account of the public security organ. After the investigation is over, the money will be returned." Despite such old-fashioned rhetoric, many citizens said that after receiving the call, I still believe it for a while, because I think it can't be false that happened to me, so I must prove my innocence right away.

Tiexi police reminded citizens that they must pay attention to protecting personal information and be vigilant, so as not to be credulous, not to disclose, not to transfer money, not to click on unknown links, not to scan unknown QR codes, not to answer transfer calls, and not to be greedy for cheap; If you are scammed, you must accurately record the scammer’s bank account number and name (or the other party’s third-party payment institution account number, order number), report the case as soon as possible and provide the relevant account information to the police to stop payment in time.