Maldives: three versions of the world's most desired Eden

As if there were little reason to travel to the Maldives, the pandemic has turned this archipelago in the middle of the Indian Ocean into a paradise, and not only for its beaches and reefs ... 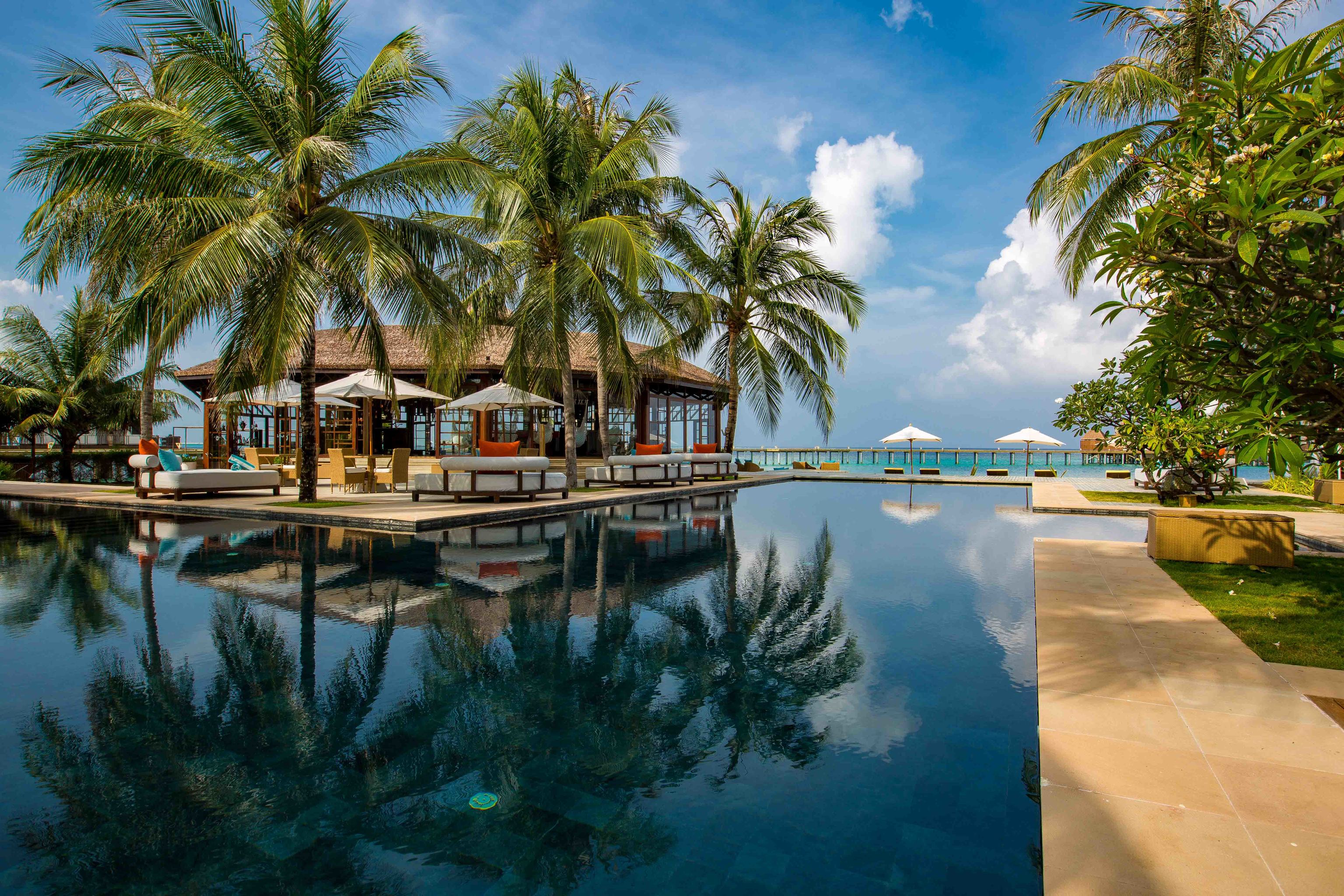 As if there were little reason to travel to the

, the pandemic has turned this archipelago in the middle of the

into a paradise, and not only for its beaches and coral reefs. With geography in favor -1,200 islands barely communicated with each other- the country was one of the first to open up to tourism thanks to its shielding against Covid-19: travelers can only enter with a negative PCR carried out in the 96 hours prior to the arrival, and the test must be repeated to change island and before leaving. With this passport, each

becomes a bubble where life passes as before. Only the old motto has changed: "No news, no shoes" ... and now also, no mask.

The plan is to empty the agenda and put it at the command of the delicious sunrises and the lavish sunsets.

In the meantime, you just have to live the good life.

But first you have to choose the style, that is why it is important to know that among the more than 400 hotels in Maldives there are them for all tastes and budgets.

, where Iberia flies directly from Madrid twice a week.

The pool at the Ozen Reserve Bolifushi and the Ozar Bar.

The percussion of the

, the typical Maldivian drums, prepares the hearts and ears of newcomers to this sanctuary of pleasure.

All the senses must be well tuned to the festival that comes their way.

At the same time, footwear and purse are abandoned, because if there is something that distinguishes the Ozen Reserve Bolifushi, it is the generosity of its

The restaurants -all of the first level-, the unfairly called "minibar", the children's entertainment club, the

and spa treatments are included in the stay.

Of course, you do not have to wear a bracelet or sign, or give your villa number at any time.

Just being on the island entitles you to everything, including the glasses of champagne on offer everywhere.

On the sand, the

, all with their own swimming pool, their garden and their access to the beach.

On the Indian Ocean, the

, luxury stilt houses with private pool, stairs to the sea and terrace with various environments.

The most exclusive have a slide directly into the ocean.

An Ocean Pool Suite with slide.

Parked at the door of their villa, each guest has an Electra hybrid bike with which to move, if they do not want to call one of the

They are the means of transportation on this exquisitely landscaped island with palm and coconut trees, pandanos, bougainvilleas, asplenios, alocasias, crowns of Christ, liquualas, water lilies, hibiscus, orchids and other local species that cover it in an orderly leafiness.

Paths of sand or wood link the villas and restaurants:

, of French inspiration, with more than 350 wines from all over the world in its cellar;

, an excellent Indian who serves

Every night they perform the miracle of offering haute cuisine typical of a continental capital in this tiny corner in the middle of the Indian Ocean.

, of course on the beach, offers breakfasts, lunches and dinners of various styles, with sushi prepared live.

The Origine restaurant, French haute cuisine on the Indian Ocean.

, a glassed dodecagon through which the ocean breeze circulates between the sofas and Balinese beds, superbly served by waiters who are experts in hitting the drink that the guest still has. he doesn't know what he wants. It is the best place to contemplate the sunset spectacle, perhaps linking it with the tea ceremony that takes place daily. At night, which in the Maldives is presented around six in the afternoon, the party continues with live music several times a week.

is the swimming pool, unusually little frequented despite its beauty.

But of course, it is difficult to leave your own village having everything inside.

One of the most powerful claims to get out of is the coral reef that surrounds the hotel.

An extraordinary background populated by dozens of colorful species in an authentic natural aquarium.

Another good reason may be the spa, which offers holistic treatments tailored to each guest in cabins over the sea.

Bicycles are the means of transportation at the Ozen Reserve Bolifushi.

It's easy to lose track of time in a place like this.

That is why each villa has a

, a butler available 24 hours a day to help guests with everything they may need, from unpacking their luggage to booking an appointment to get PCR before flying.

In the M6m you can enjoy a good table under the waters.

Is it possible to wake up surrounded by wild vegetation and believe yourself to be Robinson Crusoe, and a minute later open a bottle of

in a luxurious beachfront villa? It is, and it's perfectly doable at Life Maadhoo, the other top-

the Ozen chain has in the Maldives. As in the Reserve Bolifushi, there is a plan to completely forget about the credit card, because when you arrive at this island of white sand beaches and turquoise waters, everything is already paid for. And that "everything" includes breakfasts, lunches, dinners, snacks at any time, 80 high-end wines, the best whiskeys and other spirits, and depending on the length of the stay, several spa and diving sessions and the attention of a

for everything that may be required.

Plus a few other quirks.

Such Eden works with the commitment of about 300 workers -almost two for each guest- of 14 nationalities.

At the forefront of all of them is a Spanish woman,

, who gives this corner of the Indian Ocean her decades of experience in luxury hotels on various continents and also her love for such a fragile ecosystem.

It is well known that the Maldives, with a maximum altitude of 2.8 meters, is one of the most threatened territories on the planet due to the rise in sea levels caused by global warming.

thanks to its effort to leave a minimal footprint on nature through rigorous reuse and recycling procedures on the island itself, the almost total elimination of plastic and the increasingly widespread use of solar energy.

- as the Maldivians call the island's predominant shrub,

-, as well as palm trees, coconut palms and bougainvilleas, contrasts with the infinite range of sea blues and yellows, reds and pinks from the sky. The entire island is a color festival that is transferred to the interior design of the 94 villas. Both those erected on stilts over the water and those on the beach have been exquisitely decorated and do not skimp on invitations to the enjoyment of all the senses, from the French pastry snacks to the shower under the stars.

At the center of the

is the place to recharge your batteries at any time of the day,

, with western but also Maldivian, Sri Lankan and Indian specialties. At noon, the healthy option is the

, a sushi bar for lovers of Japanese cuisine, and sooner or later it is highly recommended to stop by the superbly equipped gym with views over the reef, or by the saltwater pool to immerse yourself with the gentle surf in the ears. If you prefer fresh water, the place is the

and at the foot of a bar that many will not want to detach from. With the sunset it opens, only for adults, the

, which as its name predicts, is specialized in gins.

The Earth Villas have their own garden facing the beach.

At night the gastronomic tribute has Indian and Sri

or Chinese in the outstanding

But the most famous restaurant on the island is the

, built under the sea.

The experience of tasting a lobster or an exquisite dessert while sharks lurk on the other side of the glass is worth living.

The tiny island of the Taj Coral Reef Resort & Spa.

It occupies a heart-shaped island whose contours can be covered in just ten minutes on foot (barefoot). It is impossible to stress over such distances, because even forgetting in the room the book with which you want to enjoy by the pool carries the maximum penalty of a short walk between coconut trees.

On the sand, the elemental to withdraw from the world.

An elegant austerity that travelers who have passed through India will appreciate and that is explained by the character set by the owners of the chain, one of the most prestigious in the subcontinent.

music is not heard

, only the sound of the waves and the wind that shakes the palm trees.

Shortly before sunset they are invited to feed the stingrays that visit the jetty.

A spectacle that sharks do not want to miss either, not always small, who in these latitudes disdain human flesh.

As a home you have to choose between a beach or a water villa. Both are spacious,

, a terrace, and their indoor and outdoor lounges. Both have direct access to the sea, with the difference that the first is built on the sand with its own garden, its sun loungers, its hammock and its little piece of beach and the second has private views over the Indian Ocean and a ladder to dive directly in the lagoon where fish of all shapes and colors live, among the fragile corals.

Just a few goggles and a

to marvel, on the very coast of the island, with the yellow-tailed clownfish, the emperor angels or the proboscis hawkfish, among many other species.

Diving enthusiasts can go on longer expeditions that include a visit to a sunken ship in the vicinity of the island.

You only have to walk a few steps from the bed to enjoy the sunrise spectacle.

The infinity pool is the social heart of the tiny island. After spending the morning diving or spa, guests spend the hours here between photo shoots and cocktails served deck-chair. Around it are the hotel's three restaurants, all of them outdoors. The

, open from breakfast to dinner, serves the most eclectic cuisine, with outstanding notes on Indian recipes.

has its own oven, and

interprets the excellent Maldivian fish in a Latin American version.

is one of the most Indian corners of the Taj.

Offers Ayurvedic aromatherapy treatments such as

, to remove impurities with the help of ginger, lime and basil, or

Kids have a mile long jogging beach at the Ozen Life Maadhoo.

with as much offer for children as the most hectic of amusement parks; there are islands of young, modern people and

on the beach at eight (in the afternoon); and there are also purets, in a detox plan with crudités and

"Enjoying the Maldives to the fullest is the consequence of having properly fitted the profile of the traveler with the profile of the resort. There are honeymoons, anniversaries, families of two or three generations, friends who enjoy the beach, who celebrate important moments, divers , silver wedding anniversary, there are people trying to remember why they married her or him ... Small details always define great trips ".

That is the conclusion of Pedro G. Figuls, Director of Communication of the

Geographical Society of the Indies

, an agency specializing in travel to the Maldives.

It is almost certain that there is "that paradise that long ago specialized in you."

Diving alone justifies the trip to the Maldives.

The Maldives: three versions of the world's most desired Eden

Openings From Madrid to London, these are the most spectacular hotels that you can open this fall

The most original rural hotels in Madrid: from tree cabins to farms for families