I "archaeologically" on the roof of the Forbidden City

In November 2016, Wu Wei returned to the Treasure Box of the High Profound Hall in Ann. Author's photo   In 2013, I finished my undergraduate and master's degree majoring in Archaeology in the History Department of Nanjing University, and I entered the Palace Museum by accident. In fact, this is not my first choice. At that time, there was no archaeological department or post in the "gongli". Alt 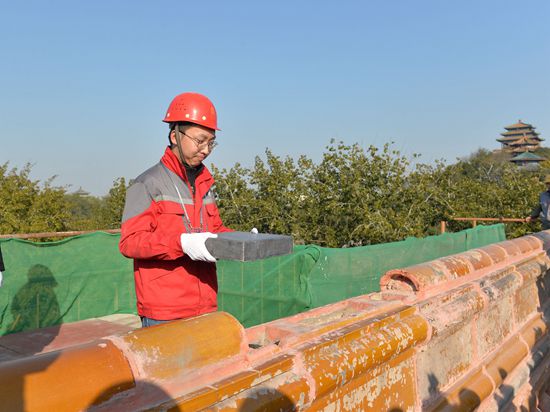 In November 2016, Wu Wei returned to the Treasure Box of the High Profound Hall in Ann.

In 2013, I finished my undergraduate and master's degree majoring in Archaeology in the History Department of Nanjing University, and I entered the Palace Museum by accident.

In fact, this is not my first choice. At that time, there was no archaeological department or post in the "gongli". Although I specialized in architectural archaeology at the master's level and participated in some ancient architectural surveying and mapping work, I still focused on archaeology. I want to do research on ancient building materials.

After "entering the palace," I was assigned to the Engineering Management Office, a department I didn't understand at all.

After I was admitted, I searched on the official website and found out that this is for the management of ancient building repair projects.

I am a little bit sad, and it seems that I have to stay away from archaeology.

Unexpectedly, this is a new departure.

Soon after joining the company, I participated in the Baoyun Building renovation and protection project following the division of tasks.

When I just walked out of campus, I was full of curiosity and excitement about everything: what is curious is what advanced concepts and technologies are used in the restoration and protection of ancient buildings in the Forbidden City; what is exciting is that I seem to be able to show my skills, after all, I have also learned some ancient architecture. knowledge.

However, when I really participated in it, I was poured cold water. The research on the protection concept and form that I learned before could not solve the specific problems that actually appeared in the repair process, and I basically didn’t understand the northern official architecture and craftsmanship. .

But archaeologists are optimistic by nature and curious about the world, and for archaeologists, going to the construction site is not a problem, but I have changed from "entering the earth" to "going to heaven."

What I do the most every day is to climb the scaffold with my camera on my back, observe the rare repair work in the outside world, ask for advice from colleagues, colleagues, builders and craftsmen, and photograph every process and method of the repair with the camera and organize it. record.

Not only the projects I participated in, but I also often drop by other colleagues to learn.

In this way, slowly, I can understand the work done by the craftsmen; after a long time, I can see whether they are doing well or not. At this point, I have stepped into the restoration of ancient buildings. The door of the circle.

During the renovation process of Baoyun Tower, I deeply realized that ancient buildings have many hidden parts, and the information contained in these parts may only be resurrected through renovation, and some may also subvert previous cognition.

Some links of ancient building repair are actually the same as the process of archaeological anatomy and excavation, during which a large amount of original trace information will be exposed, and a lot of information will disappear during the repair process, and it is irreversible. This requires a comprehensive and careful record.

However, the records of the repair project are not consistent with the archaeological records. The former emphasizes the construction process, and the focus is not on the historical information exposed by the record. This part is often passed by.

I suddenly felt that I had found a point of convergence between archaeology and ancient building repairs.

Since the historical information records of the repairs are relatively weak, and the strength of archaeology happens to be records, why not use my archaeological skills and use archaeological concepts and methods to strengthen records and research in this area!

Fortunately, I got a good chance.

In 2015, I started to take full charge of the on-site work of the renovation project of the Great Hall of the Forbidden City.

With the accumulation of experience in the Baoyun Tower project, I want to apply archaeological concepts and methods to the restoration and protection of ancient buildings.

At this time, I have joined the Forbidden City Institute of Archaeology, a non-organizational research institution established at the end of 2013 shortly after I joined the company.

I regard the roofs of ancient buildings as "archaeological strata" layered on top of each other, and all the information on the above is broken down according to the construction level and the superimposed pressure generated by the repairs in different periods, and I conduct a comprehensive and detailed extraction record to obtain its construction in different periods. , Repair the historical information and craftsmanship left behind, and preserve the "authenticity" and "integrity" to the maximum extent.

Therefore, for the first time, I led the archaeological team of the Forbidden City Institute of Archaeology to the roof, arranged trenches on the roof, conducted "archaeological dissections", and made a series of unprecedented important discoveries.

At the same time, we numbered, recorded, and preserved the important relics discovered in accordance with archaeological methods, which made up for the loss of a large number of cultural relics information during construction, and provided scientific historical information for the later restoration and protection plan.

Later, this was dubbed "roof archaeology" by everyone, and it became a major feature of the Forbidden City's archaeology.

Recording and research can't just stay on paper. This is the biggest difference from archaeological work.

Archeology is about excavation, backfilling, closing the work, and returning to the interior to organize and research; while the repair project is to be installed and restored after the disintegration.

There was once a building whose wooden base was seriously damaged. Since it has been repaired in different eras, there are many different shapes and methods. The construction unit came to ask us and the design unit what shape should be used for restoration.

The wood base is a hidden part of ancient buildings, which is often not reflected in the construction drawings.

However, we have conducted detailed surveying and mapping records in advance, analyzed various existing forms and practices, and determined the original practices.

We gave the data drawings to the construction party. They were very surprised and convinced, and repaired accordingly.

I seem to be back at the archaeological site.

The information discovered from the unloaded tiles, wood, bricks and other components seems to be telling me a silent history book, and it is like scenes of movies showing me the people, culture and society of the time.