Strong cold air is "delivered" again, and these 25 places have been heated! Is your home hot

Sino-Singapore Jingwei, October 21 (Dong Xiangyi) The last strong cold air has not completely "ended", and a new cold air is already on the way. In the next three or four days, the highest temperature in 13 provincial capital cities will hit a record low in the next six months. According to incomplete statistics from China-Singapore Jingwei, heating has been activated in more than 20 places acro 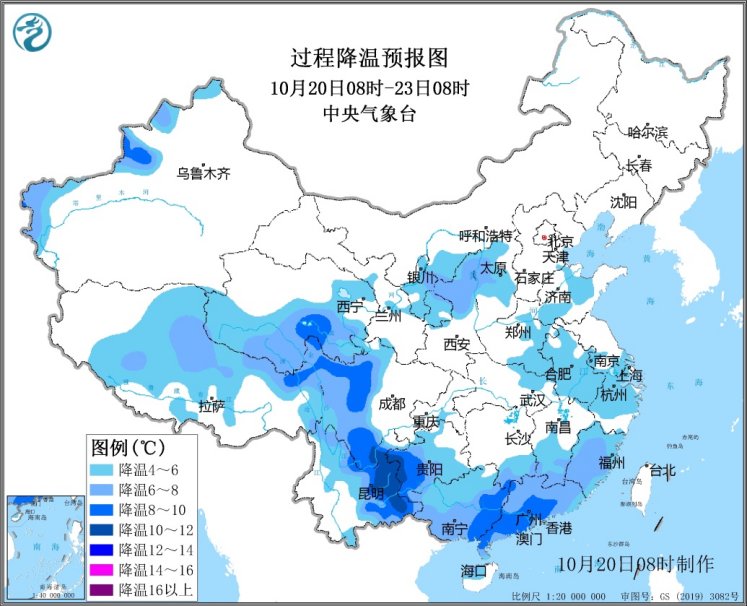 Sino-Singapore Jingwei, October 21 (Dong Xiangyi) The last strong cold air has not completely "ended", and a new cold air is already on the way.

In the next three or four days, the highest temperature in 13 provincial capital cities will hit a record low in the next six months.

According to incomplete statistics from China-Singapore Jingwei, heating has been activated in more than 20 places across the country, including Hohhot and Xining, and the government has taken various measures to ensure the people’s warmth through the winter and secure the bottom line of people’s livelihood.

Many places welcome new low temperatures, and more than 20 places have been heated

According to the Central Meteorological Observatory, there were light to moderate rain (snow) or sleet in northern Tibet, southern and eastern Qinghai, and southern Gansu on the 21st, and moderate to heavy snow and local blizzards in parts of southwest Qinghai and other places.

On 20-22, under the influence of weak cold air, the temperature in parts of the central and eastern regions will drop by 4 to 6°C.

It is worth noting that the cold air from the north will affect the southern region, and the temperature in many places in the south will collectively hit a new low since the beginning of autumn.

How cold is it?

It can be seen from the cooling forecast map that in the next three days, the cooling rate in Kunming, Guiyang, Guangzhou and other places will be around 10°C.

As the cold air reaches the "C position", heating has been started in many areas.

In addition, Xingtai City, Hebei Province, will be fully equipped with heating conditions before the end of this month, and can be opened for heating at any time in accordance with government instructions; Taiyuan City, Shaanxi Province will gradually increase the heating test on October 20 to ensure heating on November 1.

Will Beijing's heating this winter advance?

Since October, the autumn in Beijing has grown stronger, and the chill is pressing. Many people on the street have put on down jackets.

As a new wave of supplementary cold air arrives in Beijing, will Beijing provide heating in advance this winter?

You Huanling, chief of the Beijing Meteorological Service Center, said, “According to the usual practice, the standard for starting heating in Beijing is that the average daily temperature for 5 consecutive days is lower than 5℃. At present, this process may not meet this standard, so turn on heating. The possibility is unlikely. But whether the heating will be supplied in advance will be discussed and judged according to the future weather."

The cold in Beijing in late autumn is getting stronger.

Zhao Chenxin, a member of the Party Group of the National Development and Reform Commission and Secretary-General, said a few days ago that the starting time for heating in various places is generally relatively fixed, and it is usually adjusted in time according to local temperature changes during the winter.

In recent years, in order to better guarantee the heating needs of the people, the heating time in many places has been earlier than planned. If the weather is cold and the temperature is low, heating will be provided in advance.

"Starting from late September this year, as the weather in parts of the northwest and northeast turns cold, some counties in northern Xinjiang, northern Heilongjiang, and northern Inner Mongolia have begun heating. In short, to ensure the supply of energy for the people to heat up. It is sufficient, please rest assured that the whole society." Zhao Chenxin said.

The price of coal and electricity remains high, the cost of heating has increased, and the price of coal for heating in winter has risen in many places. Will this affect the heating of the people?

How about the energy supply guarantee this winter?

From an official point of view, heating is fully guaranteed this winter, and the public need not worry too much.

The National Development and Reform Commission stated on the 19th that it will implement intervention measures on coal prices in accordance with the law.

The National Development and Reform Commission pointed out that the people's livelihood must be prioritized in certain periods, and the coal, power, and natural gas supply companies have organized the establishment of a list of users for interruptible peak shaving, formulated a reduction plan, and when necessary, scientifically and orderly implements "suppressing the people to protect the people."

In addition, the National Energy Administration said that it will pay close attention to the situation of coal supply in the peak winter, highlight the coal supply in key areas such as the Northeast, and give priority to guaranteeing the use of coal for power generation and heating to ensure that the people stay warm through the winter.