Benedict Cumberbatch in the role of the mad artist and the new "Halloween": the main film premieres of the week

Will Sharpe's biographical drama about the English artist Louis Wayne is out this week in Russian cinemas. The main roles in the film were played by Benedict Cumberbatch and Claire Foy. Also on the screens you can see the action movie Joe Carnahan with Gerard Butler, the new film of the Halloween franchise and the directorial debut of actor Daniel Bruhl. Among the premieres of Russian production are Igor Ugolnikov's "Learning Fruits" and the first film by Lyubov Mulmenko "Danube". 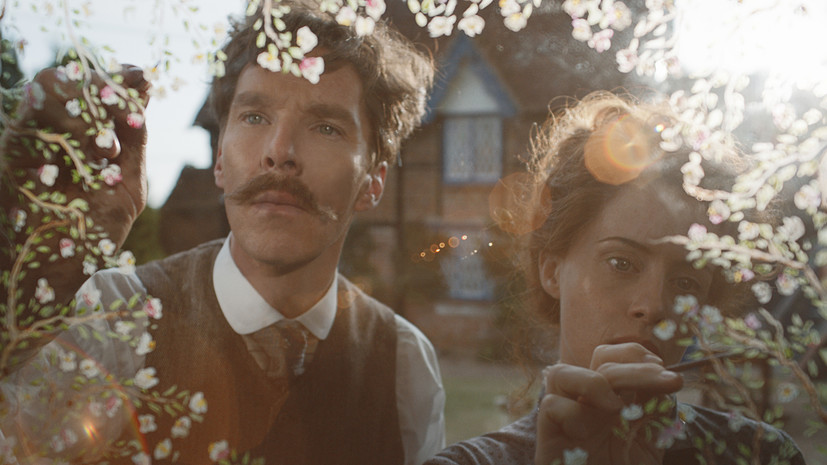 David Gordon Green's thriller "Halloween Kills" is another round of history, begun back in 1978 by John Carpenter, and a direct sequel to the 2018 slasher "Halloween" by Green.

The new tape became the 12th part of the franchise and lined up around the next fight between Laurie Strode and the maniac Michael Myers.

The latter escaped from the burning basement and returned to take revenge on the heroine.

Green's films omit the plot twists suggested in sequels by other directors (for example, Laurie's death).

It is known that the director is working on another part of the franchise: in 2022 the thriller "Halloween Ends" will be released.

Jamie Lee Curtis, who starred in the original film by John Carpenter, plays Laurie in all of Green's Halloween movies.

The Electrical Life of Louis Wain

Will Sharpe's biographical drama (Black Pond), starring Benedict Cumberbatch, is based on the true story of the English illustrator Louis William Wayne, who became famous for his depictions of anthropomorphic cats.

In the film, the fate of the artist is shown from the beginning of his career, when he draws animals to feed his sisters, to growing fame.

Along with fame comes to Wayne madness, sometimes accompanying genius.

The hero is more and more immersed in the world he invented.

The artist's wife, Emily Richardson, was played by Claire Foy, known for the TV series The Crown.

The historical picture by Igor Ugolnikov is set during the Great Patriotic War.

The plot revolves around the Pushkin Museum in the village of Mikhailovskoye, where German literature teacher Maria Schiller (Nastasya Kerbengen) comes to train Wehrmacht soldiers.

She begins a relationship with the local "left-handed" Sergei Trofimov (Sergei Bezrukov).

When an order comes from Germany to take out all the monuments and legacy of Pushkin from Mikhailovsky, the heroes are forced to make a choice based on their own convictions.

According to the director, he wanted to show that Pushkin remains for the Russian people a symbol of language, culture and belonging to their country.

“They fight and die for Pushkin.

In him, in his poems, they find support, support, strength for creativity, the life-affirming energy of the Russian spirit, ”the director emphasizes.

Ugolnikov himself starred as an employee of the Antipov Museum.

Joe Carnahan's film, starring Gerard Butler, follows a swindler and a professional hitman who get into a conflict and accidentally involve a young police officer who recently joined the service.

The film, which received an 81% freshness rating on Rotten Tomatoes based on 102 reviews, is praised for its dark humor and nods to classic 1970s crime fighters.

The picture should appeal to viewers who are not afraid of scenes of violence and love unexpected plot twists.

The premiere of the film, which is a measured discourse on love and freedom, took place at the Kinotavr festival.

In the center of the plot is the girl Nadia, who decided to take a break from Moscow in Belgrade.

There, the heroine meets the charming local resident Nesha, who reveals for her the delights of a carefree existence.

Having succumbed to falling in love and the charm of a semi-vagrant lifestyle, Nadia misses the return flight and decides to stay in Belgrade, but soon begins to doubt the advisability of striving for absolute freedom.

The main roles in the film were played by the actress Nadezhda Lumpova, familiar to the audience from the TV series "You All Enrage Me", and Nenad Vasich, who had not previously acted in films

Celine Syamma's new film is a magical chamber drama about a girl who meets her age in the forest and then recognizes her mother as a stranger - only from the past.

The heroine has the opportunity to understand the emotions of loved ones through communication with her little mother.

His debut film was the dramedy about social inequality "In the Neighborhood", where Bruhl also played a major role.

The film tells about a successful actor named Daniel (coincidences like this make you think about the share of autobiography in the picture).

Before leaving for screen tests in London, the hero enters a bar, where he meets his neighbor Bruno (Peter Kurt).

A casual conversation and revelations of the interlocutor forever change Daniel's life and future plans.

The film was presented at the 71st Berlin International Film Festival.