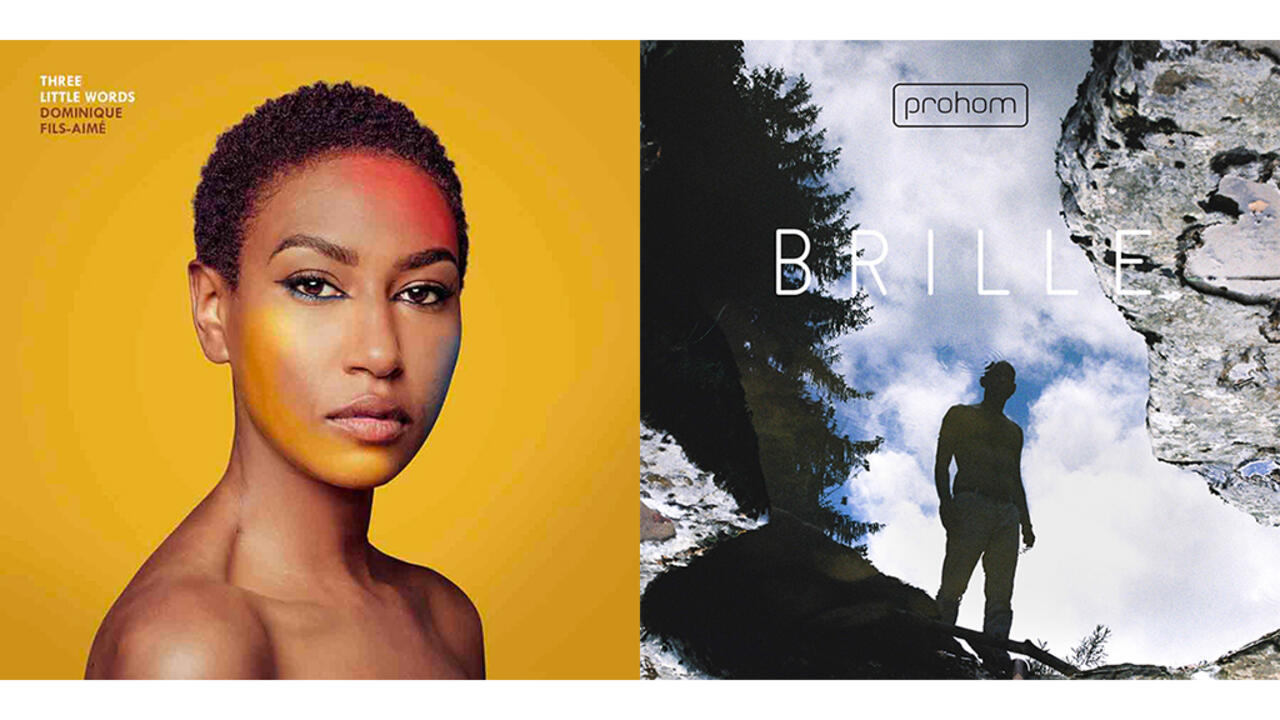 Cover of the albums "Three Little Words" by Dominique Fils-Aimé and "Brille" by Philippe Prohom.

which explores the roots of African-American musical culture. This last opus represents the adaptation that Dominique Fils-Aimé makes of soul music in its purest form: a music which arises from the bowels of his soul and which enriches the soul of his listeners. It is both a recognition and an appreciation of the musical genres that inhabit the singer (Montrealer of Haitian parents who came to Quebec in the 60s).

Possibly the most ambitious and eclectic work of the singer-songwriter to date, the enveloping and muffled voice of Dominique Fils-Aimé nourishes warm harmonies of the 1950s doo-wop style in

or mixes with it. to brass crescendos in the more traditionally Soul track of

. Throughout the album, the bewitching vocals of Dominique Fils-Aimé are supported by a gripping groove that is juxtaposed with African percussions, as well as the strings and brass sections, of synthesizers, which predominate in the piece

with its polyrhythms of drums and superimposed bass lines.

The tireless work of director, arranger and sound engineer Jacques Roy has been integral to the conception of the trilogy as a whole.

In Dominique's words, Jacques Roy was the one who knew how to connect his voice with the multitude of sounds on the album, making sure to cover the entire frequency spectrum.

Jacques is the glue that binds each piece of the trilogy together thanks to his open-mindedness and his willingness to understand exactly what I want to express through my music,

Dominique Fils-Aimé is a Montreal singer-songwriter, inspired by soul icons of the 1940s and 1960s such as

While her musical roots are rooted in soul and jazz, her voice transcends contemporary urban soundscapes.

Songs played, extracts from the album

Three little Words - While We wait - Mind made up -

Then in the #SessionLive, we welcome Philippe Prohom for the release of his new album

»But that does not go without saying ...

, there are four albums, a live, an EP, clips, stage, a lot of scenes, transmission, training of artists, a few singles that turn on the radio and then a Camino de Santiago on video .

Since the success of

It forgets to love

in 2002, a blue line track, at the crossroads of trip hop and song, Philippe walks, contemplates and seeks to get as close as possible to his emotions.

Forget the cerebral to touch the heart.

", he confessed with humility and courage in 2007, on the album

, and since life has humor, it is on foot that he will become another man.

From 2015, he takes the road to Compostela, experiences the full presence in a Buddhist center, and finally comes out as a magnetizer. “

I try to walk my word,

” he explains. With his gaze always turned towards others, over the years he has learned to care for animals and humans, he travels to Brazil, India, and mischievously recounts his adventures on YouTube in video; hours of smiles and gentle escape. For the past two years, Philippe has written and composed the equivalent of two albums, he isolates himself, sifts through the flow of all his words. He left the city to cultivate his garden, in a quiet area, in the Drôme, then in a chalet surrounded by nature. He gently kneads the living.

This is how the story of this new disc begins, like the painter who draws the world with a single line, Philippe Prohom poses precise and essential texts.

, cornerstone of this disc, cradle with a touched love, his growing daughter. "

In the absence of paradise I leave you the utopia, the one that is not, not yet ... You can shine for her and start with that. You can, and you can. And you know why ? Because you are already shining.

A song to draw the tears of the worst crocodiles.

, the first title of the album is all dented, a sound object, in a loop of words and in crash.

It's beautiful, but for how long?

It takes a joking spirit to question the solidity of the harmony of nature by deconstructing the melody!

is the preface to a luminous disc.

An ode to nature, to freedom, aware of its fragility as much as of its strengths.

, it's 2021 that takes the time to look in the rearview mirror before embarking on the world of tomorrow. Philippe released his first record at the age of 32, in his fifties today, his sounds come back from afar: vinyl loops borrowed from his father, synths and transformed beats, alchemist, on a single computer, hacked and re-created sounds. tweaked again, on songs from yesterday that lead to today. Echoing

, the ninth and last title of the disc, a clever epilogue, Philippe takes us by the hand and invites us to love each other a little more, to simply enjoy simple pleasures.

I am no longer afraid of death. When I feel the sun warming my fingers, Look, it's beautiful. Listen, watch.

These are his last words. Finally, our Siddhartha, does not forget while digging the ground of his spiritual garden, all the pleasures of the body. That of endorphin in

and then, whether we get there or not, the magic of self-expression, in

, the paradox of a piece to dance where we don't dance and

You can even dance

, which drives the point home of the joy that we owe ourselves.

Philippe Prohom, does not seek the crowd and the recognition, he covers us with tenderness and brings us closer to the real, he will come if you ask him, to sing at your place, because he wants to know us, one by one, to make us dance , think, just enjoy a moment.

Tu Can Even Danser

Titles performed in the #SessionLive (