[China by the Mother River] What secrets are hidden in the exquisite seven-hole jade sword? 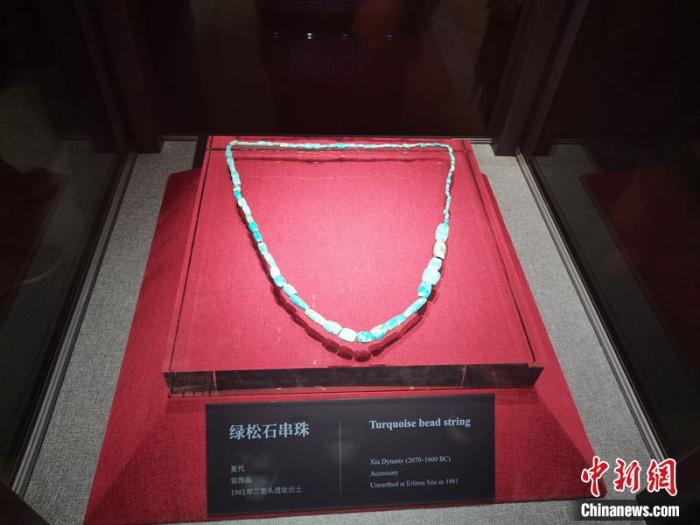 Recently, the interview team of the “China on the River Mother River” network theme event came to Luoyang. At the Xiadu Ruins Museum in Erlitou, the reporter saw many exquisite cultural relics. Through them, they were able to understand some fragments of the lives of the ancestors of the Xia Dynasty.

In Erlitou Xiadu Ruins Museum, there are many precious cultural relics on display.

"The most important thing at the time was war, and the other was sacrifice." Sun Chenjiao, an instructor at the Xiadu Ruins Museum in Erlitou, introduced the remains of a complete young pig sacrifice in the museum, which has a history of 3,800 years. "Using'Tailao' on sacrificial occasions, pigs are also one of the three animals."

As for the bones of some animals, they may be used as divination materials.

She explained that the left shoulder blades of animals are generally found so far, which proves that the ancestors of the Xia Dynasty had the custom of advocating the left, and believed that the left meant auspiciousness.

Choose the bones and burn them with fire. Various cracks are formed on the bones. In the past, people thought that observing the cracks on the bones could see the good and bad things in the future.

Sun Chenjiao mentioned that King Xia would conduct pre-war fortune-telling before he sent out troops to fight, using such bones. Whether this battle can be fought is determined by these bones.

As the saying goes, no wine is not a ritual, there must be a wine vessel if there is wine.

There are three bronze knights on display in the exhibition hall. "Erlitou culture has just entered the Bronze Age, and bronze wares are relatively rare and precious. Therefore, every bronze knight is a ritual vessel for sacrificial occasions." She said.

In other words, this is for the gods in the minds of the ancestors to drink, not for daily necessities.

How to invite gods to drink?

First, the tripod is heated by fire, and then the wine and spices are put in it, so that the gods in the sky can smell the fragrance of the wine.

These cultural relics are exquisitely beautiful

In the pavilion, there is a treasure of the town pavilion, which has attracted the attention of many visitors.

"The grid pattern copper tripod is called the No. 1 tripod in China. The three legs are quadrangular pyramids with irregular grid patterns on the waist and abdomen, which gives it the name." Sun Chenjiao said. To represent Kyushu, the tripod has been a symbol of noble status since that time.

Suddenly, the grid pattern copper tripod has a simple and simple shape and a small size. Why can it be called the "No. 1 tripod in China"?

Sun Chenjiao explained that so far, the only bronze tripod from the Xia Dynasty that has been unearthed in China is the earliest and the only one with a clear site.

Its overall material is jade, without any traces of being used.

There are some exquisite geometric patterns for decoration.

Sun Chenjiao said that experts believe that this is also a ritual tool for sacrificial occasions.

A lively little monkey is a cultural relic that is currently loved by visitors to the museum.

It is a skeletal monkey carved from animal bones. It is in a squatting shape with hands on knees. It needs to be displayed with a magnifying glass.

Sun Chenjiao said that it was a veritable "micro-engraving technique."

The life of the ancestors

If you carefully observe the cultural relics in the museum, you can find many details.

They can't speak, but they truly record some fragments of social life in the long river of years.

"Up to now, thousands of cultural relics have been unearthed at the Erlitou site, but because of the earlier age, most of them are pottery. There are very few bronzes." Sun Chenjiao introduced, but the large number of unearthed bronze arrowheads proves that although bronze is rare and precious, Used in actual combat.

She cited an example, "At that time, the tomb of an adult man was found, and a copper arrow was inserted into the man's chest, which is a proof of its use in actual combat.

The bone scoops and spicules made of animal bones show the lives of the ancestors on one side.

Sun Chenjiao said that bone needles were already a very delicate tool at the time, used for stitching. In the case of linen and silk fabrics, sewing into clothes was no problem at all.