In Kazakhstan, the Soyuz MS-18 landed with cosmonaut Oleg Novitsky, actress Yulia Peresild and director Klim Shipenko on board. Earlier, the filmmakers went to the ISS to shoot for the film "Challenge" - the first Russian game project, part of the work on which was carried out in space. The film crew stayed in orbit for 12 days. 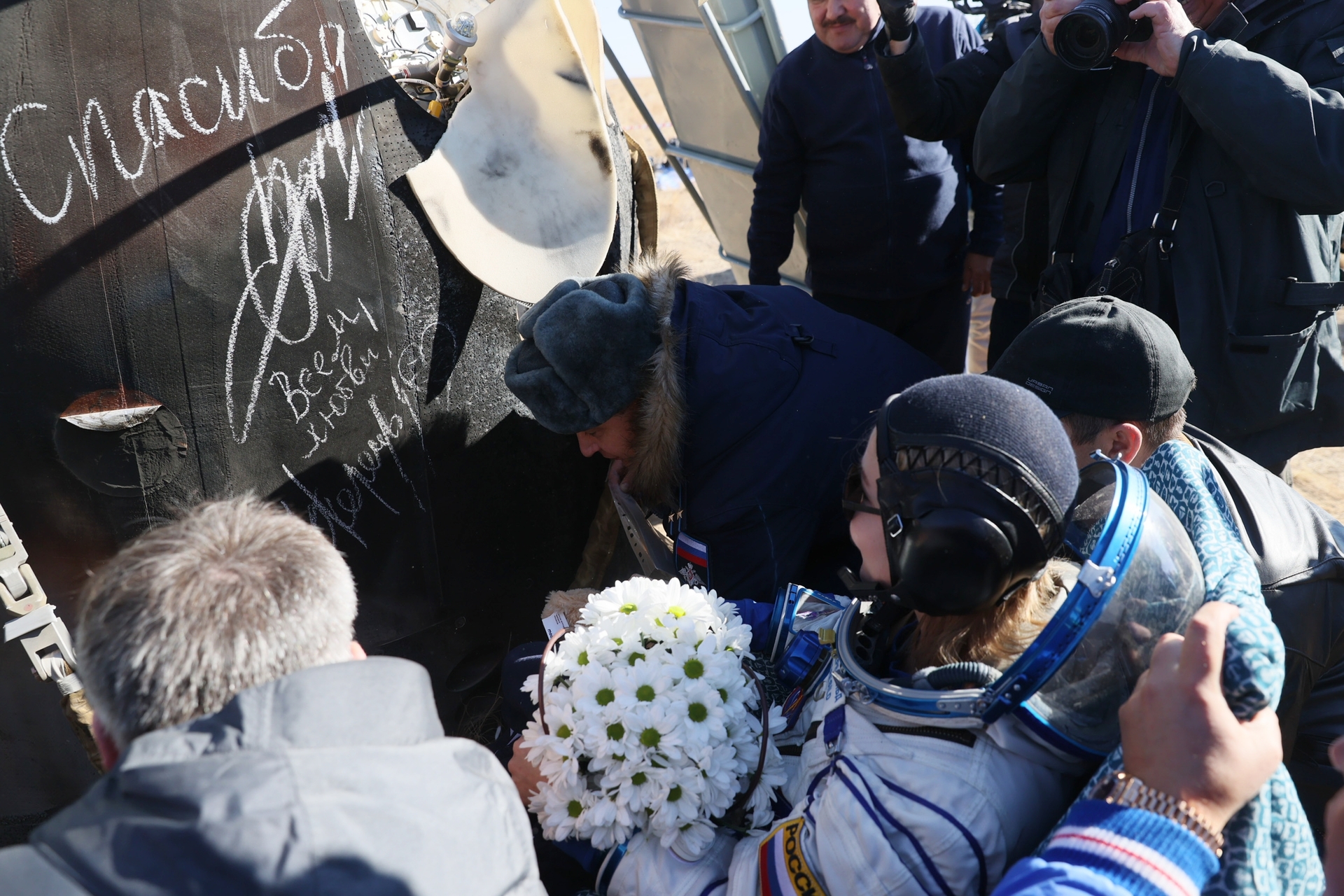 The descent vehicle of the ship “Yu.A.

On board were cosmonaut Oleg Novitsky, actress Yulia Peresild and director Klim Shipenko.

The team stayed on the ISS for 12 days.

During this time, the film crew spent part of the filming of the film "Challenge" - the first Russian game project, the work on which was to take place, including in space.

“The descent vehicle of the manned spacecraft # SoyuzMS18 stands upright and is under guard.

Novitsky was given birch sap, and Peresild - a bouquet of daisies.

Filming of "Challenge" continued after landing - the landing of the heroes Peresild and Novitsky should become one of the scenes of the upcoming film.

Before going to the tent, Oleg Novitsky signed on the hull of the descent vehicle.

The film crew also congratulated the cosmonaut Anton Shkaplerov, who is currently on the ISS.

“Followed and worried by the whole crew!

And I was very pleased to work with you all these 12 days, ”he said.

Friends, I am glad to welcome everyone from the ISS again!

And immediately I congratulate @novitskiy_iss, Klim and Yulia on their successful return to Earth!

Followed and worried by the entire crew!

Expedition 66 starts working on the ISS.

Soyuz MS-19 with Shipenko and Peresild on board and under the control of the hero of Russia Anton Shkaplerov took off from the 31st platform of the Baikonur cosmodrome on October 5 at 11:55 Moscow time

The docking took place at 15:22 Moscow time. Due to malfunctions of the Kurs system, the spacecraft could not automatically dock to the Russian segment of the ISS, and therefore Shkaplerov was forced to carry out the operation in manual mode. The head of Roscosmos Dmitry Rogozin called this a standard situation, which only confirmed the cosmonaut's skill. Julia Peresild assisted the captain of the ship during docking, and Klim Shipenko managed to shoot the whole process on camera, filling three flash drives with video materials for the future film.

On the ISS, the Soyuz MS-19 team was met by cosmonaut Oleg Novitsky and Pyotr Dubrov, NASA astronauts Mark Vande Hai, Shane Kimbrow and Megan MacArthur, ESA astronaut Tom Peske and Japan Aerospace Research Agency astronaut Akihiko Hoshide. Immediately after docking, the members of the expedition contacted the Earth and shared their first impressions: “Everything was new for us today. Every ten seconds brought something different, new. We just met with everyone who already lives here, on the ISS, a long time ago. Now we will get acquainted. It still seems to me that I am sleeping now, ”Peresild said.

The astronauts also communicated with their loved ones on Earth. In an interview with RT, Klim Shipenko's mother, Valeria Shipenko, said that she was the first to receive a call from space: with her son, they discussed that the docking of the Soyuz MS-19 spacecraft reminded the plot of the film Salyut-7, filmed by the director in 2017. Speaking about Klim's childhood, the woman admitted that she did not remember his dreams of becoming an astronaut. But she noted that as a child, the director was happy to study a book on astronomy. According to Valeria Shipenko, her son's desire for space is a manifestation of his character: “Klim wants everything, the impossible. This is its essence <...> wants to achieve, put a tick in this and go further. "

Active work on the film "Challenge" began already on the first day spent on the ISS: we managed to shoot two scenes, prepare for the next day and get used to the station.

Yulia Peresild was accommodated in the commander's cabin, which for a while turned into a dressing room, where the actress was preparing for filming: “I'm making up here.

I have makeup all over my cabin, ours, cinematic.

On the floor, the medical pads are spread out. "

The state of health of Peresild and Shipenko turned out to be even better than the doctors expected: they did not experience any discomfort already on the second day of being in zero gravity.

True, as Anton Shkaplerov admitted, it took the filmmakers some time to get used to moving around the ISS: in the first days they demolished "half of what is at the station."

In space, Yulia Peresild and Klim Shipenko worked seven days a week, and sometimes to the detriment of good sleep, as reported on Twitter by Dmitry Rogozin.

For 12 days, they had to have time to shoot the entire pre-approved program, adapting to the unexpected in the process.

At the same time, the director said that he plans to preserve and even emphasize some spectacular effects that cannot be achieved on Earth due to gravity.

Among them is Peresild's hairstyle in zero gravity.

In addition to working on the film The Challenge, Shipenko and Peresild also performed standard procedures for cosmonauts.

Preparations for the flight to Earth began on October 13th.

Under the leadership of Oleg Novitsky, who was in charge of landing the Soyuz MS-18 spacecraft, the crew members trained and studied the onboard documentation necessary for a safe return.

Shipenko and Peresild will not be able to go home immediately.

According to the director's mother, in the next two weeks the cosmonauts will have a rehabilitation period, "they will be in a sanatorium, where they will be put in order."

According to Valeria Shipenko, the film will become a box office: "The mission of a doctor who is being sent into space <...> this whole topic will be very interesting to the Russian people, because this is our everything, our life."

The director's wife, Sophia, also has no doubts about its success, since "both Klim and Yulia are very stubborn people who are used to getting results."

The importance of the flight of the film crew into space is celebrated as the most important event for the entire industry.

As Dmitry Rogozin emphasizes, this event is important, among other things, as "working out the possibility of accelerated preparation for such a flight and carrying out a mission to the ISS of a specialist (engineer, doctor, astrophysicist) who may suddenly be needed on board the station."

The Challenge tape will become a joint project of Roscosmos, Channel One and the Yellow, Black and White studio.