International report - Thailand: the face-to-face between royalists and pro-democrats continues

The pro-democracy movement has gathered almost every week for over a year. Originally from student circles, activists, with increasingly diverse profiles, are demanding ref… 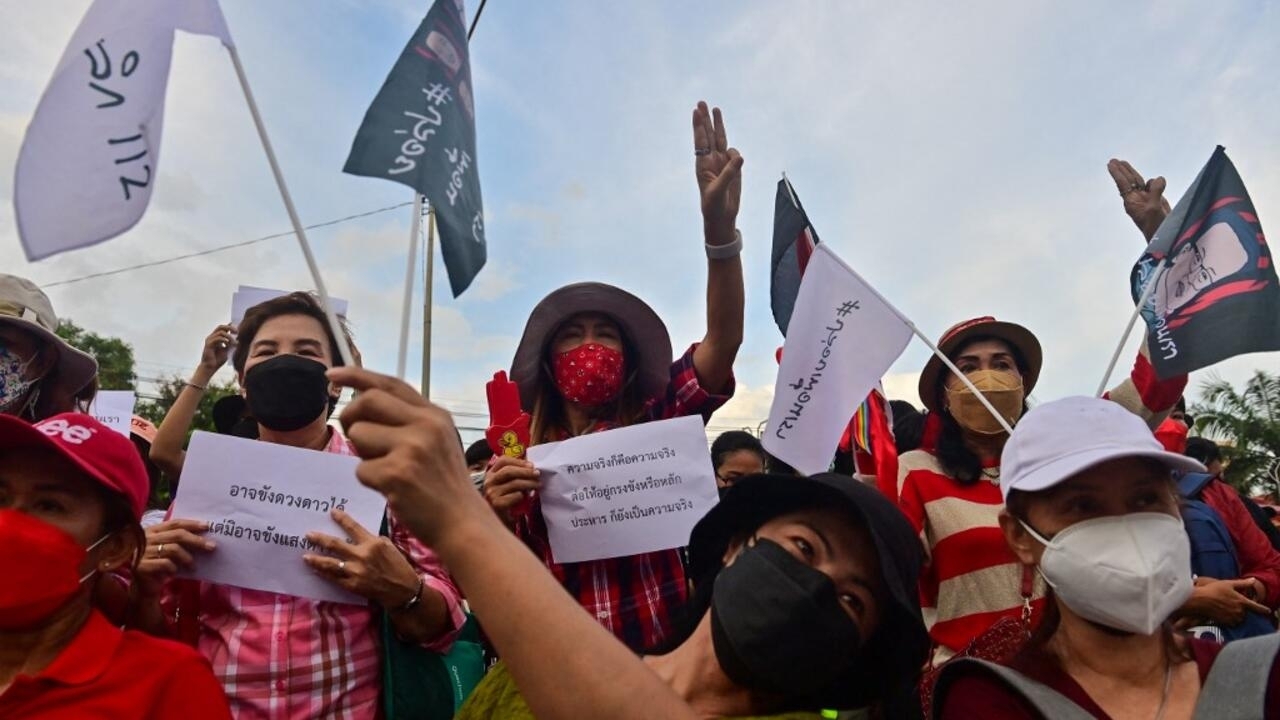 Thailand: the face-to-face between royalists and pro-democrats continues

Protesters hold placards and give three-fingered salutes during a demonstration against the government and in favor of the release of political prisoners outside the Bangkok prison in Bangkok on October 13, 2021. AFP - LILLIAN SUWANRUMPHA

The pro-democracy movement has gathered almost every week for over a year.

But the royalists do not hear it that way.

For them, only an almighty King can guarantee the strength and unity of the country.

They were organizing counter-demonstrations this week.

These are two opposing visions of Thailand.

From our correspondent in Bangkok,

Rappers on loudspeakers and supercharged speeches, in this demonstration of the pro-democracy group Thalu faa, idle urban youths rub shoulders with former members of the “Red Shirts” peasant movement. All are calling for an in-depth reform of Thai society, to allow more equitable economic development, laws that apply to all. They demand in particular parliamentary control over the monarchy, perceived as a bulwark of the elites and a brake on reforms, as well as the departure of the military administration, which came to power by coup d'état.

For the historian Thanet Thai Apornsuvan, the actions of elites have tarnished the image of the monarchy: "

Because of all these coups, because of all these reversals of democratically elected governments, such as rewriting the Constitution if it was a vulgar piece of paper when it is supposed to be our supreme legislation, the conservative elites have damaged the notion of political legitimacy in Thailand by invoking the protection of the monarchy each time and using it as a justification of all these illegal actions against democratic governments.

Royalists toughen up against pro-democracy activists

But not everyone agrees. A few kilometers from the Young Democrats, a group of ultra-royalists organized a counter-demonstration. Here, the t-shirts are yellow, the royal color, or white, printed with the Thai flag. Not everyone here belongs to the elites, like Somneuk Lakachai, a schoolteacher. For him, maintaining a strong monarchy is the element that has always been able to prevent Thailand from falling into the hands of foreign powers, colonial or communist and above all, it is she who guarantees the unity of the country.

The monarchy is what helps us live together, all Thais.

Look in France, there are tensions with Muslims.

Take the story of

for example, cartoonists made fun of the Muslim religion, Muslim citizens demanded that they be condemned, but the authorities replied that it is freedom of expression.

So Muslims got angry and killed more than 10

Here in Thailand, that cannot happen, because the King protects all religions equally.

The royalists suspect the democrats of preparing under cover of reform, an abolition of the monarchy.

They warn that they are ready to take up arms to defend it.