French press review - In the spotlight: Bolloré “out of Africa”?

In the News: Bolloré “out of Africa”? Audio 04:54 The front page of the French daily Le Monde, dated October 16, 2021. © Le Monde By: Norbert Navarro 4 min Advertising According to the newspaper Le Monde , the Bolloré group is in the process of preparing to sell its logistics activities in Africa. The information is not confirmed by other sources, at least not yet, but it should be noted all 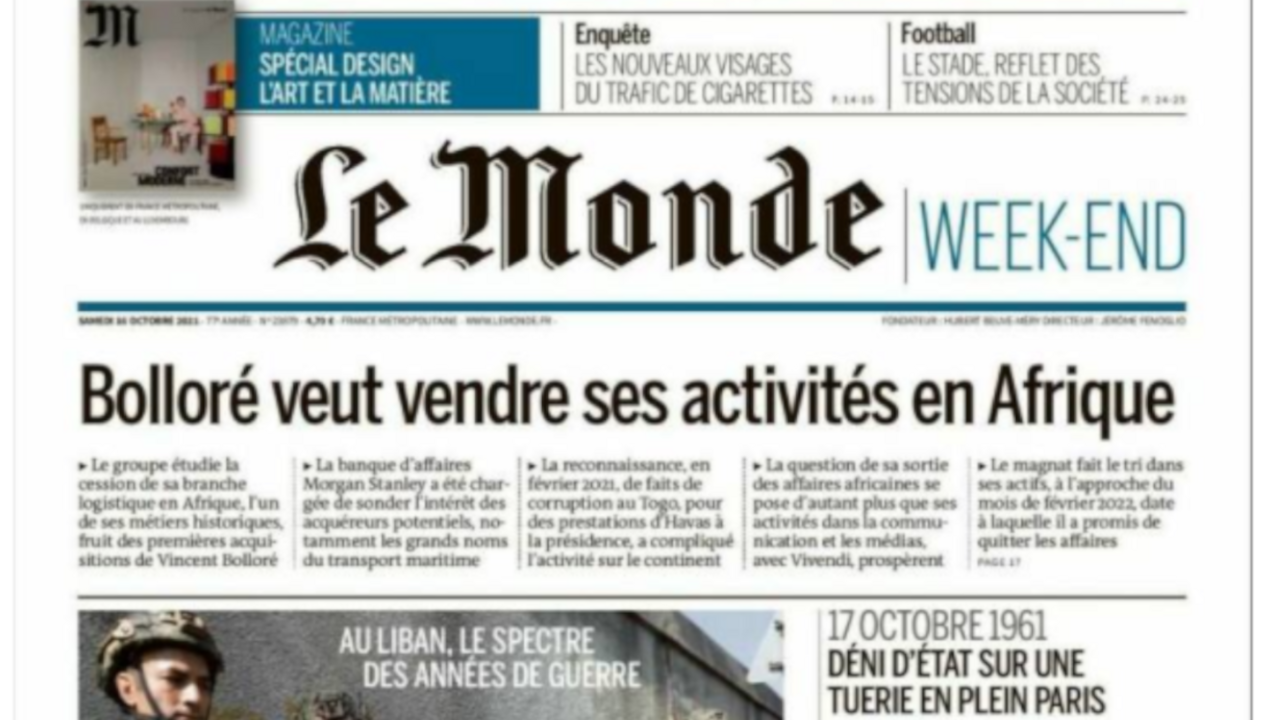 In the News: Bolloré “out of Africa”?

, the Bolloré group is in the process of preparing to sell its logistics activities in Africa. The information is not confirmed by other sources, at least not yet, but it should be noted all the same that the evening daily announced yesterday, Friday, October 15, 2021, the Bolloré group in study for "

the sale of its logistics activities in Africa

nothing says that the transaction will be completed

", this daily even evoking a "

reflection on the future

"; which does not prevent him from hoisting said reflection into one and even from specifying that "

the Morgan Stanley investment bank was tasked with discreetly surveying the interest of potential buyers, in particular the big names in maritime transport.

The French CMA CGM examines the case, as well as the Danish Maersk.

The port operator Dubai Ports World and the Chinese Cosco Shipping, manager of the Greek port of Piraeus, could also join the ranks

As predicted by this newspaper, "

if this operation goes to an end, it would have" enough to cause an earthquake on the African continent

if the African farewell (of Bolloré) materializes, what to do with the billions recovered?"

He will perhaps ask the same question (on a scale a thousand times smaller, however) ... He is the winner of EuroMillions, who will pocket millions of euros, as if it were raining. It is a new record of earnings in Europe which was broken last night: 220 million euros! It is indeed the biggest jackpot ever pocketed by a still anonymous player.

And the winning EuroMillions ticket has been "

“Enthuses the front page of the newspaper

. As calculated by this daily, the winner can buy "

1.8 tonnes of premium Beluga caviar" or "have dinner every night at (the multi-starred chef) Guy Savoy for more than 1000 years"!

Two tons of caviar or almost, or a thousand years of dining in one of the greatest Parisian restaurants

obviously not enough to cut the appetite of readers of Le

Journal in which a sociologist evokes this morning

"the part of the dream"

that these jackpots maintain in the players who are thinking of

“To get out of their living conditions.

It is often seen as money falling from the sky,

We can always dream, indeed.

Who will face Macron?

It is a close game that potential aspirants play in the second round of the presidential election next year in France, notes the front page of

According to an Ifop poll for this daily and the

, in all the cases tested by this polling institute for the first round of this presidential election, Emmanuel Macron is always given the lead in voting intentions with between 25, 26 or 27% of the votes depending on the configuration of the candidates. But it is the sequel that challenges this daily. Because the president of the National Rally Marine Le Pen would collect from 17 to 18.5% of the voting intentions, and the journalist Éric Zemmour from 16 to 17% according to the assumptions. Both competing for qualification for the second round, while the LR candidate who would best resist this competition would be Xavier Bertrand (with 15% of the vote), the candidates Valérie Pécresse or Michel Barnier being, at this stage, left behind.

On the left, the LFI candidate Jean-Luc Mélenchon would obtain 8% in all cases, ahead of the ecologist Yannick Jadot (7% in all cases), and the socialist Anne Hidalgo (from 5 to 5.5%).

France on the right

seems in a desperate position

", and this newspaper concludes with "

a confirmed right-wing of the French electorate

Because if Marine Le Pen and Éric Zemmour are in competition, “

we must not underestimate their complementarity either.

Between them, they "weighed" 27% in September (in the Bertrand hypothesis on the right).

Today, they unite 33% of the potential votes cast.

This confirms that what is called the rightization of the electorate, or the expectation of an assumed “identity” offer, is a major factor in the competition that is beginning