"Vision-60" .. The first armed robot dog that may change the future of war

&nbsp;“Robotic dogs” have become their own sniper rifle, which sheds light on the future of war and remote control technology, after the American company “SWORD Defense Systems” designed this weapon. 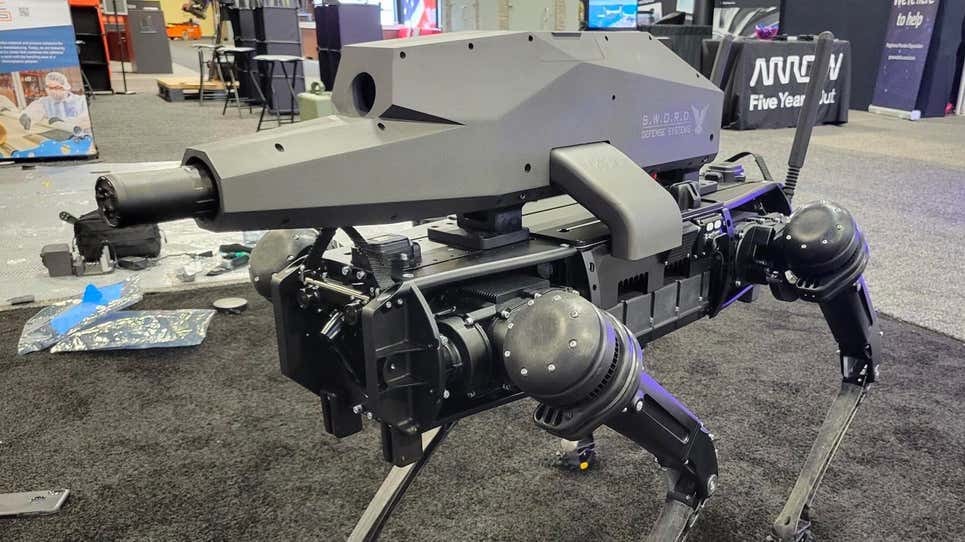 "Vision-60" .. The first armed robot dog that may change the future of war

Robotic dogs have their own sniper rifle, shedding light on the future of war and remote control technology, after the American company SWORD Defense Systems designed this weapon.

The company, whose primary mission is to manufacture advanced weapons systems, says the SPUR special-purpose rifle can be used with many unmanned remote-controlled platforms.

The company displayed the rifle mounted on the four-legged robot dog "Vision-60", produced by "Ghost Robotics".

The company notes that the sniper rifle features a variety of sensors and cameras that enable it to operate in many different conditions, including working at night or darkness in general.

The rifle also contains the 6.5 Creedmoor cartridge, although the rifle can also be used with the 7.62×51 NATO cartridge to increase ammunition intake.

The SPUR can shoot targets up to 1,200 metres, and it has a Cerakote GEN II NIR ceramic coating that helps camouflage the rifle from night vision systems, in addition to having an optical zoom of up to 30x.

The remote operator can load the gun from a safe distance, in addition to the features that also allow him to eliminate malfunctions and unload the weapon, as these weapons enable humans to stay a safe distance away from combat, rather than sending them into a dangerous environment.

The SPUR + Vision-60 coupling was revealed at the US Army's annual conference recently in Washington, but it is unclear if it has been officially sold to any military in the world.

Reports indicate that the robot has been tested by the US and Australian military.

For its part, “SWORD Defense Systems” explained that “the SPUR rifle coupled with the robot was specifically designed to ensure accurate firing from unmanned platforms, as it is characterized by safe capabilities, clarity and accuracy of fire, which provides the operator with the ability to load and secure the weapon from a distance. .

The potential use of AI-powered weapons in the future remains controversial, with scientists expressing concerns about the potential for fatal malfunctions or their inability to properly distinguish combatants (targets) from peaceful civilians.