Ynés Suelves, the jet-set designer: "The surname can help, but then you have to show the world who you are"

The five o'clock light diagonally illuminates the studio on the second floor in the center of Madrid where Ynés carefully displays the dresses, most of which are pink (le 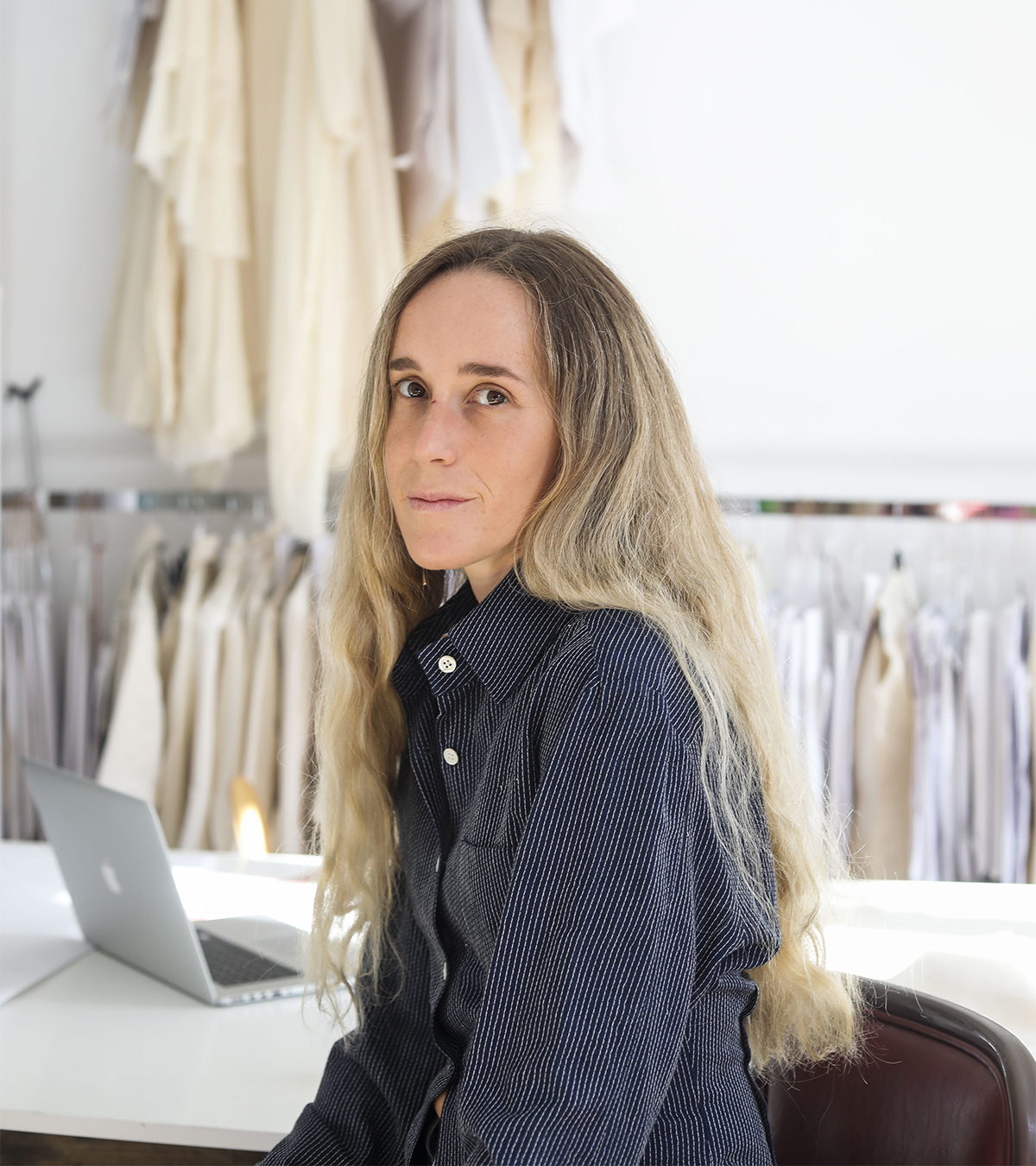 The five o'clock in the afternoon light diagonally illuminates the studio on the second floor in the center of Madrid where Ynés carefully displays the dresses, most of them pink (she is fascinated by the tone, although it was difficult for her to incorporate it into her clothes).

and three others were worn by her, her sister and her mother at the wedding of her cousin Ana Maura de Suelves, whom she also dressed for the event.

She is one of the brides of the aristocracy of this country who has worn one of his suits and shirts (already iconic?), An elite eager for a

talent that Ynés now wants to export outside the VIP bubble

And he is confident that the next runway at Mercedes-Benz Fashion Week Madrid, in February, where he will walk for the first time in February, will be the perfect showcase.

Does your last name weigh?

Or does it facilitate?

It opens doors, without a doubt, but to get high you have to show it every day, says Ynés, sheltered throughout the interview by Kenzo, her border collie merle.

He works side by side with

his mother, who puts the icing on the cake with starry

"It's my universe," he presumes.

Now she laughs, but both of them have the strains of the day to day, in which a brush (badly) placed on Ynés's work table can provoke an episode of fury.

It does not reach more, they reassure.

Shy and dyslexic, she has overcome these complexes through her designs.

Until recently he didn't dare ask for a glass of water out of shame, but when it comes to work he is able to stand up to the powerful leadership of the London Marangoni Institute to defend his collection.

Where does this drive for design come from?

The idea was in me since I was born.

I have always assumed that I was going to be a designer but I am not sure when I made that decision.

When I finished school, I started at the French fashion school in Madrid, where I learned my foundation and the passion for pattern making, which is what defines me.

The studies have cost me a lot because I am dyslexic, and English had it through.

That is why I spent the first year in London studying the language, teaching every day.

From there I entered the Marangoni Institute.

P. There you stood out and won as the best designer of the promotion.

Was it a slap in the face for everyone who said you'd go far for the last name?

In Spain I got good grades, I was among the best students, and yet people told me: "You are going to go far just because you are who you are."

They dropped it so wide.

And it bothered me quite a bit.

Going to London was a pleasure because nobody looked at you differently, nobody noticed the surnames.

And I ended up winning the end of year parade.

(At this point, his mother -as she will do on other occasions- intervenes to point out the importance of this parade, in which they have the privilege of exhibiting 20 of the 80 students: "He forgets to say it," he proudly adds).

You openly acknowledge it, but this world (actually, like so many others) is very competitive.

Do you have to bring out your genius to make them listen to you?

So it happened in London.

I proposed an idea for the show and the director rejected my project without even looking at it.

He asked me to remove the zippers from the garments.

And I stood up: I sent an email advising that I was resigning from the show and that I would do the collection on my own.

The next day they called me to tell me that I could do whatever I wanted, and in the end I got my teachers to help me without imposing anything on me.

I enjoyed very much.

When I finished, I won the award, and I was very excited because I did it with something of my own.

P. How is the introverted mood in the world of fashion?

When I am least shy is with my work.

I've always been ashamed to even ask for a glass of water, but when it comes to something about my job, I don't care if I talk to management or whoever I need.

What has helped me the most is entering the world of jewelry, because it is aggressive: people tried to deceive me because they saw me as shy and I had to become a shark.

Q. How would you define your style?

Oops, that question is difficult (here I am surprised).

I really like the oversize and the masculine touch.

But I like to do everything, I don't want to close myself to it, I want to evolve.

When I was at Marangoni, for example, I did my thesis on the creative process around a punk pink leather jacket.

Do you have to be brave to wear it?

Yes, it is a color that says a lot.

I've always liked it, but it was hard for me to use it on clothes.

It was a challenge for me.

I hated it before.

But when you start to study it and work on it, you end up falling in love with it.

This is what happened to me with pink, which now fills my collection.

P. Next February you will parade for the first time at the Mercedes-Benz Fashion Week Madrid.

Recently you were suspicious of her because of the perishable collections that this catwalk implied ... What are you preparing for the moment?

Is it possible to adapt?

As it will be my first fashion show, I want to go back to my origin, to large shapes, to zippers.

I want to evolve the initial projects and define them.

I want to design for myself.

And I don't question the catwalk, but I see shows of up to 60 outfits.

Knowing how much it costs to produce it, I am overwhelmed by thinking that what I am going to prepare is going to die in six months or even earlier.

I've always been against doing ephemeral things for the parade.

I prefer to focus on little garments that I know will have an eternal life.

Small, well thought out and well made collections.

P. Europe (and much of the world) is beginning to be impregnated with this "green wave" and several firms are beginning to ride it.

However, large collections continue to prevail.

How to achieve balance?

I find the wave of sustainability quite hypocritical.

Everyone wants to sell that it is sustainable, it is enough for them to put a label with the certificate, but it is not enough.

Some denim suppliers explained to me that they had two prototypes: one made from plastics and the other from plastics collected from the ocean.

They ended up confessing that they actually made plastics to be able to make fabrics.

That is the problem, that there is a lot of lies behind the label "sustainable", and it is what I want to run away from.

For me, there is nothing more sustainable than making things for life and with good material, which pollutes much less than polyester.

Q. You work with your mother on this study.

Now you look at ease, in harmony, but what is it like to work together?

There will be some quarrel ...

And here Maria comes forward to point out: "Constantly. She is my mother, I am her daughter, she is scolding me all day."

Where does this role exchange come from? I ask.

The point is that I take care of the money.

And this is where the conflict of interest comes in: when we go to a store and she wants to take 30 fabric samples, I have to stop her, because it costs a lot of money.

It is endearing to observe at this moment the discussion in which mother and daughter enter, recounting anecdotes and taking advantage of the occasion to claim their plot of work.

Ynés insists that she cannot buy the meters of fabric that her mother wants, because it costs 100 euros or more.

María protests because "her pulse trembles" when she painted one of them.

Q. You have dressed Rossy de Palma, María José Llergo, Martina Figo, your cousin ... Are you afraid of being pigeonholed?

I've dressed a lot of people, but I feel like I'm focused on a very small bubble.

My goal is to internationalize.

Who would you like to see with one of your designs?

And who does not?

I would be very excited to dress Úrsula Corberó.

He took one of my pants but I haven't seen them yet.

To Rosalía, Shakira or Queen Letizia.

Actually, I would love to dress everyone, because clothes change depending on the person.

Q. Santiago Isla, the son of the president of Inditex, was criticized when he pointed out, from his (privileged) position, that the new generations had little tolerance for frustration.

Are young people being stigmatized?

We have other struggles compared to before.

There is more and more competition, we are more and more even and now it can help you to be who you are to access certain things, such as an interview, for example, but then you have to show the whole world who you are.

How many people have plugs ... Now if you're good, you have to prove it.

Q. You have just entered the world.

From that innocent look, do you think Madrid has the capacity to become a fashion hub?

It has possibilities, what I do not understand is why it does not happen.

Let's see if now, after the pandemic, we begin to have more security and the authorities help us, from the government to the companies themselves.

We have very good artisans and designers, but there are no good schools.

Here we debate with his mother about the complexes of Spanish fashion, the power of the 'influencers' and the ostentation that, he believes, they have incorporated into the consumption habits of the youngest.

Also about the parades.

Next, it's her turn.

LifestyleTrends 2021. The 70s are back (and not only in fashion)

ModaColor camel: guide to know how to combine it

Or when one gets used to surprises