The Hong Kong University's decision to remove the famous sculpture Pillar of shame by the Danish artist Jens Galschiøt has provoked strong reactions. Now the pressure on the Danish Foreign Minister to put his foot down against China is increasing. - I want him to call in the Chinese ambassador for talks, says Jens Galschiøt to Kulturnyheterna. 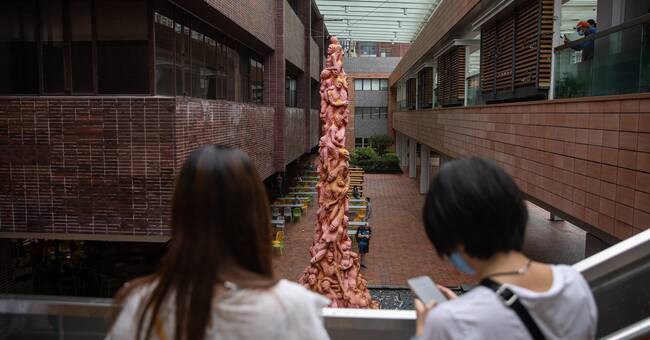 Jens Galschiøt is supported by several Danish politicians in his demand for Foreign Minister Jeppe Kofod (S) to summon the Chinese ambassador to Denmark to a meeting on the handling of Pillar of shame.

It reports the newspaper Politken.

The artist, who has been banned from entering China for some time, has written an open letter to the Hong Kong authorities in which he emphasizes that Hong Kong University has never paid for the sculpture and that he therefore has ownership of it.

- It is gratifying that many of the political parties have joined me.

It increases the pressure on the Social Democrats to do something, says Jens Galschiøt.

Søren Espersen of the nationalist Danish People's Party hooks on the demands from Galschiøt and wants the Chinese ambassador to give an explanation as to why the sculpture, which is a memorial after the massacre in Tiananmen Square in Beijing in 1989, should be removed.

"Even if it attracts attention, we should not dance to China's pipe," he said in a statement.

Martin Lidegaard of the Social Liberal Radical Left and Uffe Elbæk of Frie Grønne also think that Jeppe Kofod, through the Chinese ambassador, must ensure that the sculpture comes home to Denmark in good condition, if it is to be moved.

The future of sculpture

Jens Galschiøt fears that the sculpture will be destroyed in the near future if nothing is done, and right now he is having a discussion with the University of Hong Kong through his lawyer about what will happen to it.

He would like to come and bring the sculpture home to Denmark himself, despite his travel ban.

But most of all, he wants the sculpture to remain.

- It is an important monument to the massacre in Tiananmen Square.

The memory of it deserves at least six square meters on Chinese territory, he says Jens Galschiøt.