China News Service, Hong Kong, October 6 (Reporter Zhang Xiaoxi) The Chief Executive of Hong Kong Special Administrative Region Carrie Lam delivered the 2021 policy address at the Legislative Council of the Special Administrative Region on the 6th. This policy address of more than 30,000 words focuses on development, focusing on the development opportunities that the country provides to Hong Kon 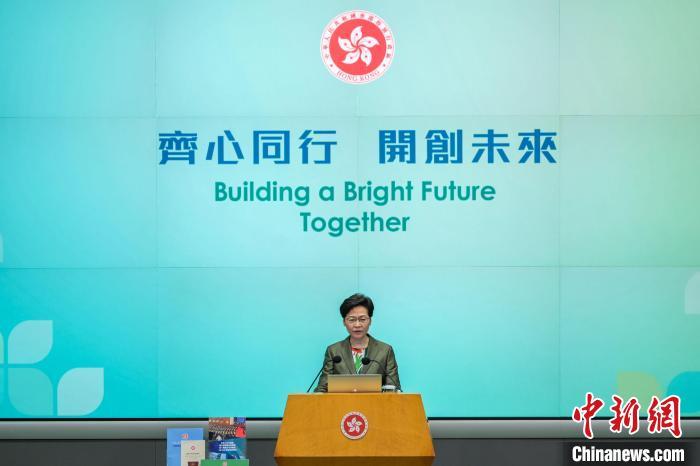 This policy address of more than 30,000 words focuses on development, focusing on the development opportunities that the country provides to Hong Kong, and hopes to plan a new future for Hong Kong under the new situation and new opportunities.

The policy address is titled "Working together to create the future". It is Carrie Lam's fifth and last policy address during the term of the SAR government.

The cover of the report uses the sky blue representing "hope", and the content includes ten parts.

Carrie Lam said that Hong Kong has experienced unprecedented severe challenges in the past two years. With the full support of the central government, it has now returned to the right track of "one country, two systems".

With the implementation of the Hong Kong National Security Law and the improvement of the SAR election system and the restoration of social security and stability, Hong Kong is again at a new starting point for economic development.

As long as Hong Kong makes good use of the policies of the central government to support the SAR and exerts its unique advantages, it will be able to inject endless momentum into the economy.

On October 6, Carrie Lam delivered the last policy address during his term.

The construction of the northern metropolitan area of ​​Hong Kong is one of the key measures.

Lam Cheng Yuet-ngor said that the northern metropolitan area will build an international innovation and technology center, and create a unique urban landscape of "urban and rural integration, development and conservation coexisting"; and the Victoria Harbour Metropolis, which supports Hong Kong as an international financial center, will also be expanded to Including the "Lantau Tomorrow Vision" Jiaoyizhou artificial island reclamation project.

In addition, Carrie Lam also proposed a number of measures to support industries or services with development potential, and proposed to set up a scientific research center in the Hong Kong-Shenzhen Innovation and Technology Park under construction, so that life and health start-ups or large enterprises can see the advantages of Hong Kong and Guangdong-Hong Kong-Macao University. The potential of the Bay Area market is interested in developing in Hong Kong.

The picture shows a large pond in Hong Kong close to Shenzhen, which was a closed border area before 2013.

The policy address stated that hundreds of hectares of privately owned wetlands and ponds in the north will be gradually recovered to "optimize treatment."

Housing and land issues have long been an issue of concern to the people of Hong Kong.

Lam Cheng Yuet-ngor said that the SAR government has secured about 350 hectares of land to build about 330,000 public housing units in the next 10 years. In the next 10 years, we will strive to prepare about 170 hectares of land to provide the market with about 100,000 units. Land use; in addition, it is also recommended to review the development potential of the "green belt".

She also emphasized that improving people's livelihood is the key task of the current SAR government.

In the coming year, the planned policies and measures will be implemented intensively.

In addition, in order to enhance governance capabilities, Carrie Lam said that in the next few months, a plan to restructure the SAR government will be prepared for the next SAR government to consider and implement.

She also asked the Secretary for Civil Service of the SAR Government to review the current selection and appointment mechanism for high-level civil servants, and suggested the establishment of more full-time and dedicated commissioner posts.

On October 5, Carrie Lam presented a new policy address at a press conference.

In the concluding remarks, Carrie Lam said emotionally that less than two years after taking office as the Chief Executive of the Hong Kong Special Administrative Region, she was under unprecedented pressure due to the "regulation turmoil", external forces' continuous and crude intervention in Hong Kong affairs, and the impact of the new crown pneumonia epidemic.

When talking about the motivation to support her to overcome all difficulties, it was the support from the central government, the promise when she took office, and the trust and support of her family, she even choked up.

Lam Cheng Yuet-ngor said that today, she has more confidence in Hong Kong than ever before, and she is more certain that Hong Kong can integrate into the overall situation of the country's development and play an irreplaceable role in the country's progress towards the second centenary goal.

She also hopes that Hong Kong can cultivate a new generation with national concepts, Hong Kong sentiments, and commitment to society.