Exclusive video footage obtained by "The Sun" showed the American actor Nicolas Cage, 57, being evicted from a high-end restaurant in Las Vegas, and he was drunk. , where 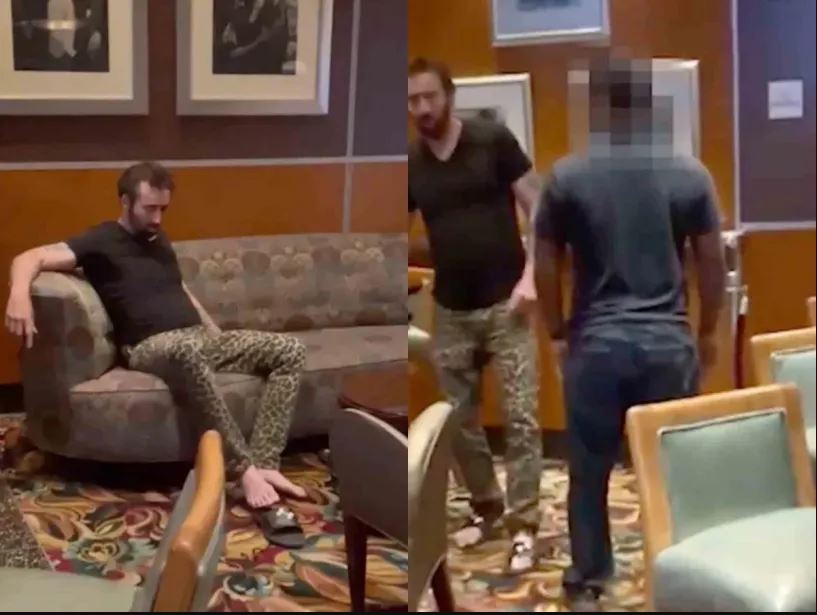 Exclusive video footage obtained by "The Sun" showed American actor Nicholas Cage, 57, being evicted from a high-end restaurant in Las Vegas, and he was drunk.

The newspaper revealed that the Las Vegas-based actor, Nicolas Cage, was expelled from the upscale restaurant at Howard Hughes Parkway, where employees believed him to be “homeless” for being drunk and in dire straits due to the way he dressed. The video was first published on The Sun newspaper website yesterday.

Eyewitnesses initially mistook the Oscar-winning star for his portrayal of an alcoholic in "Leaving Las Vegas" as a drunk homeless person.

In the clip, Cage appeared sitting on one of the sofas at the entrance to the restaurant, wearing loose-fitting leopard-print pants, a black T-shirt and flip-flops that fell off his feet during his visit to the restaurant.

And Cage appeared in a state of drunkenness so much that he made a great effort trying to wear the slippers that the waitress brought him, and the video showed a person who appeared to be an employee in the restaurant who took Cage out, while the American actor was talking about something incomprehensible.

The source added: "We were shocked to learn that it was Nicolas Cage, he was drunk and was getting into a fight with the staff."

"He was in a very bad condition and was walking around without shoes. The staff told us that before the incident he was drinking tequila and whiskey," he said.

"He was yelling at people and trying to get into a fight and then the staff told him to leave, he was so drunk that he could barely put his slippers on before he was taken outside."