Bilbao wanted to toast on an afternoon of intermittent rain for the new normal with its Big Week of knowledge. The main streets were lined with posters ... 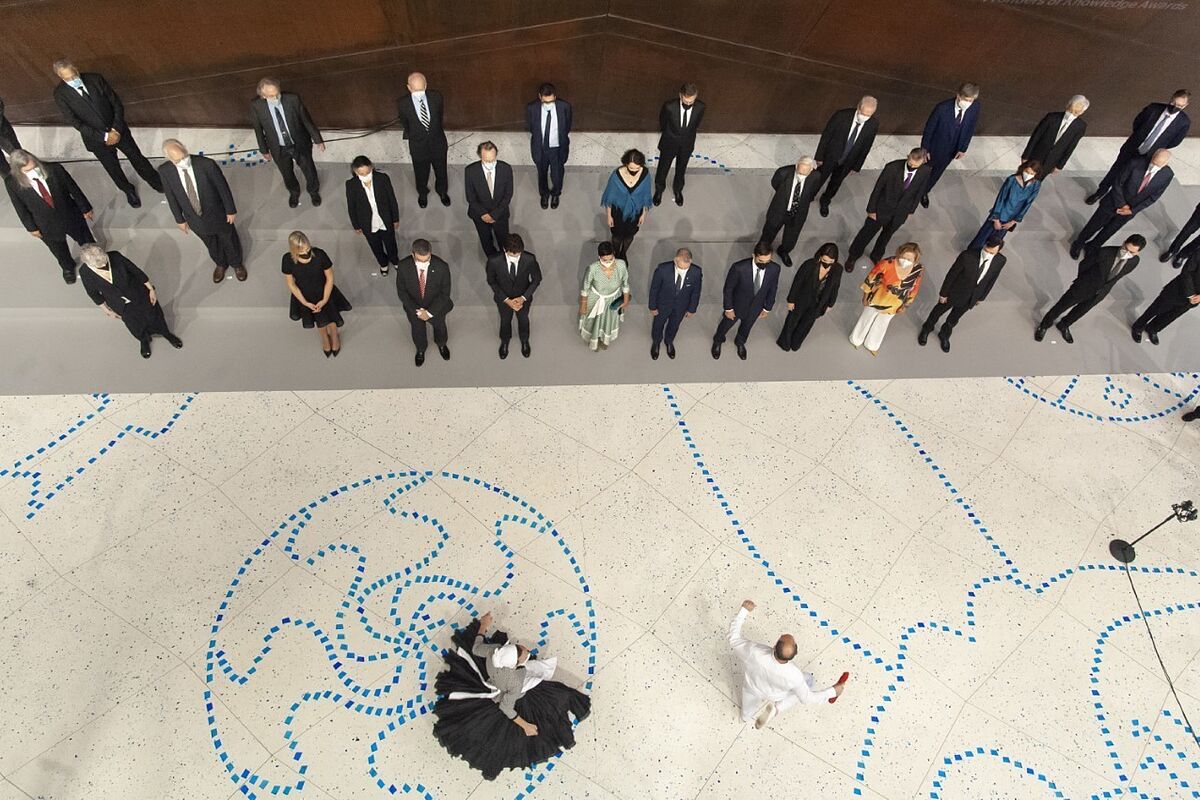 The main streets were lined with posters and banners reminiscent of an electoral campaign.

But the faces that hung from trees and streetlights were not of politicians, but of wise men.

What must be recognized is that it is much more stimulating.

chose it as the permanent venue for some awards that, due to the prestige of its winners, already compete with the Nobel Prize in the recognition of human talent.

with the presence of 24 of the 35 world leaders who have been awarded in their fields.

The Frontiers of Knowledge, each endowed with 400,000 euros in each of its eight categories, are a recognition of scientific research, social sciences and artistic creation.

On this occasion, after 18 months of coronavirus struggle, they intend to act as a hopeful response to the two great global challenges that await us: climate change and the technological revolution.

Because what has marked this event is undoubtedly a change of cycle, as exciting as it is demanding.

“We are already in the

new era of the Anthropocene.

Pure nature, unaltered by human beings, no longer exists ”, announced in his speech Ian Burton, one of the winners in the area of ​​Climate Change and an international reference in the study of its impact.

We are before the reset.

The need for the human being to take a step forward.

That was the idea of ​​most of the interventions.

, who in the 1980s predicted that global warming would increase the strength of hurricanes, reminded audiences how climate science was born "driven by curiosity," which has been "the engine of the majority. of the great advances in science and has also made great leaps forward in technology and medicine;

jumps that nobody anticipated at the beginning of the investigation.

Without basic science it would have taken us a decade to get the vaccine, not a year

"Without basic science," Emanuel continued, "it would have taken a decade, rather than a year, to develop the Covid vaccines that have saved millions of lives."

Because although the pandemic has conditioned our lives, seriously injured the world economy, we must face it. Not forgetting other threats, just as dangerous. This is what

, president of the BBVA Foundation,

: "We live in an era of profound change, driven by one of the greatest technological disruptions in history and also by the enormous challenge of sustainability." But for these environmental challenges "there is no recourse to a vaccine", which is why he stressed that

"humanity has never had as much responsibility as now

. The actions supported by the knowledge that we take today can forever transform our planet.

, president of the Higher Council for Scientific Research (CISC), made another great toast to science and the spirit that has made it great, the argument to see the future with optimism: «The scientific advances necessary to identify and addressing these challenges are born from curiosity, creativity and also from the dedication of people like the winners, to whom we thank today for this effort ”.

The event, which lasted a couple of hours, was attended by the Lehendakari,

u, who closed the event and remembered the victims of the La Palma volcano, and the mayor of Bilbao, Juan Mari Aburto, as well as prominent members of politics, business and the media, such as

, CEO and counselor of Unidad Editorial.

The transformation driven by Information Technology was another of the global challenges highlighted at the ceremony.

, professor at Stanford and current president of Alphabet, Google's parent company, along with his co-award winner David Patterson of the microprocessors that are vital in our daily lives and power mobile phones and computers, stressed the importance of cultivating a free thought, which in his case generated "anti-intuitive and sometimes" controversial "ideas.

"This award," said Hennessy, "celebrates not only those ideas ... but also perseverance, even if they call you crazy."

Humanity has never had as much responsibility as now

In another equally important and futuristic field,

Bernhard Schölkopf, who was

for their contributions in Artificial Intelligence, discussed the opportunities and also the risks that this new technological revolution presents us: «The machines that process information touch the human condition in a more subtle way than those that are limited to processing energy. We are beginning to see it in many ways: artificial intelligence can diagnose diseases, manipulate information, influence electoral processes, even contribute to the manufacture of weapons that make autonomous decisions without being held accountable.

, from New York University, detailed in his speech how his research and that of his three colleagues in the recognition (the professors

) was fundamental to face the financial crisis at the beginning of the century and the Great Recession, which was so hard in Spain.

Nor can we forget the interventions of other winners who have been key with imaginative and capital contributions in different disciplines, such as biomedicine, with research related to the detection and treatment of pain;

the study of our cognitive behavior

to understand ourselves and others, the musical avant-garde or the fusion between science and culture, represented like nobody else, the venerable

, who a few months after turning 100, thanked his award with a video.

The challenge is raised, the glove is up.

Now there is a way, maybe slow, because knowledge needs its deadlines, but constant insurance.

Perhaps it is enough to remember the words that

the great mathematician who warned that quantum computers could decipher any encrypted code,

when he asked himself what lessons we had learned: "Asking good questions can contribute as much as having answers."

So let's ask the future.

UcroníaSpain, year 2071: a journey to the alternative future of a country beset by climate change