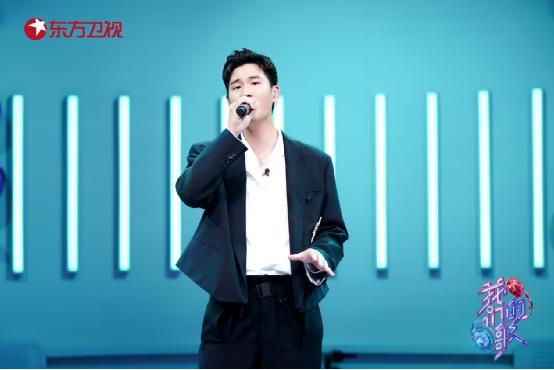 New and old singers collaborated across generations to sing the golden tunes of the era, making audiences feel the charm of classic music in the collision and exchanges.

In the first episode, in order to give new singers more guessing information, the senior singers must first undergo a "physical examination" of the musicians, including height, weight, strength, vital capacity, etc.

However, the senior singers all "skin". In the past, Xue Zhiqian took the lead in holding a square prop and became a 208cm "giant". Later, Miriam Yang squatted down with a heavy object and measured the final data at 72cm and 72kg.

After Qi Qin took every test seriously, Lin Zixiang showed the cute side of his predecessors, with a height of 0cm and a vital capacity of only 1 candle, and finally nodded in satisfaction with self-affirmation.

These data confuse the new singers when browsing, which has become one of the interesting points of the first episode.

The senior singers are not only ingenious when they enter the venue, but even the nickname is also hilarious. Miriam Yang's "Taro Mud Bobo" can make the audience feel that the audience is suddenly closer, and Lin Zixiang's "80,000 milk boy" is even more revealing. Playful.

Qi Qin's nickname has become the most serious and toughest among them-"Wolverine".

In this way, the gathering of the four senior singers made people feel the heavy weight of the Chinese music scene, but the opening performance dilutes the heavy and seriousness, making the show more lively and interesting.

Although the singers of the predecessors at the opening are cute, their strength is undoubted. The singing of Miriam Yang and Qi Qin on the stage not only makes people go back to the golden age of Hong Kong Music in a second, but also can sing with the new singers. Taste the touch of music inheritance and inter-generational communication.

The most important thing was Lin Zixiang’s appearance. When he stood on the stage and sang a Cantonese song, not only the audience but also the singers were already in tears. Miriam Yeung said: “This feeling cannot be described in words. ".

Whether it is a senior singer or a new generation singer, they sing not only the song itself, but also the story of the age.

The times are changing and turbulent, but the charm of this golden song of the times will once again radiate new light in the program.

This season of "Our Song" still continues the tradition of blind matching only by voice in the first round, but the new singers are more "a sense of crisis", because there are four senior singers in the first issue, but there are five new singers. In the end, there will be a new singer who cannot be paired successfully.

The upgrade of this model not only makes the show more suspenseful, but also encourages new singers to work harder to show themselves in the show, and it also gives older singers more choices.

Who will be matched successfully and who will regret to lose?

After Zhou Xingzhe successfully sang a chorus with his predecessors, he faced a raid for the first time. Who would choose to raid the singer-songwriter, and will he succeed?

This is also extremely anticipated.

Whether it is the strong strength of senior singers or the strong impact of new singers, when new and old singers sing on the same stage, the integration and innovation of music will allow audiences to see more possibilities in the Chinese music scene, and feel the charm of the times in music. Feel the changes of the times in the singing.

The third season of "Our Song" is still moving forward on the road of music, bringing more voices of the times to the audience.