A drawing of Van Gogh, which was kept in a private Dutch collection for more than 100 years, was shown for the first time to the public, the day before yesterday, at the Artist's Museum in Amsterdam. The first to present this 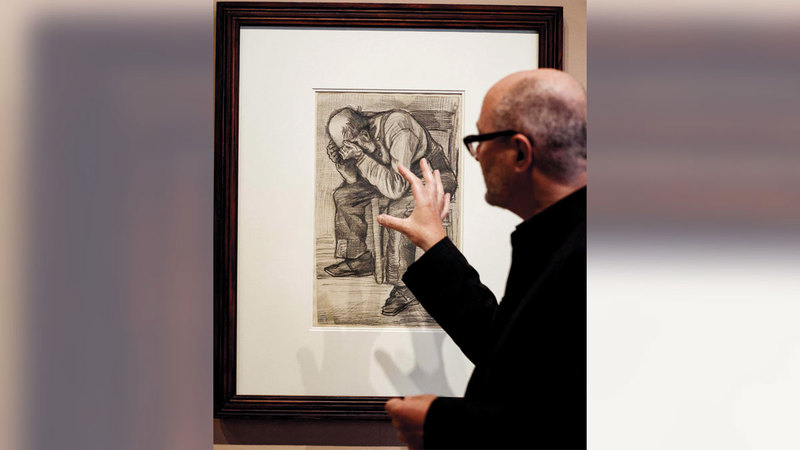 From the beginning of his artistic career

A drawing of Van Gogh that has been in a private Dutch collection for more than 100 years was shown for the first time to the public, the day before yesterday, at the Artist's Museum in Amsterdam.

"This is the first time that this work has been presented to the public," the official at the Van Gogh Museum in Amsterdam, Theo Midendorp, told AFP.

It has never been shown anywhere else,” explaining that “it is part of a special Dutch collection in which it has been preserved for a long time, and it is the first time that we have been able to see it.”

The drawing is a small sketch in pen that was done in November 1882 at the beginning of the painter's career in Holland, a period about which little is known, and arouses increasing interest.

The work, which bears the name of a sketch of “The Exhausted Villager,” shows an old, tired and sad villager sitting with a hunched back on a wooden chair with his head in his hands.

The museum has another similar drawing in its collections under the name "Exhausted Villager".

The owners of the painting, a Dutch family who bought it in 1910, resorted to the museum to confirm the authenticity of its lineage after an appeal launched by the Foundation to collectors to enrich the digital database and the museum's record.

And health experts confirmed that it was attributed to Van Gogh, which is a "very rare" event, as museum director Emily Gordenker said, adding, "We are honored to share this drawing, which dates back to (Van Gogh's) beginnings and history with our visitors."

The work will remain on display in the museum until January 2, before returning it to the family who loaned it and preferred to keep its identity confidential.

Experts suspected the existence of a second copy of "The Exhausted Villager" based on letters Van Gogh wrote to his dear brother Theo, but without knowing if this drawing still existed.

Finding it was a "surprise and a stroke of luck," according to Midendorp.

These two works are part of the "hundreds and hundreds" of preliminary drawings that Van Gogh made when he was living in The Hague, learning the origins of the art trade.

It was easy to investigate the origin of this work because it never came out of the same family environment, passed on from one generation to another, after it was purchased in 1910 from a well-known collector, Henk Premier.

The experts based their analyzes on the quality of the paper, the type of pencil used, and the effects of the distinctive way in which the artist hung his papers on the drawing table, all of which constituted additional evidence of the correctness of the lineage.