China News Service, Fuzhou, September 15 (Ye Qiuyun) "1, 2, 3, 4, 5... Alright." At 15:00 on September 15, at the Wenquan Primary School in Fuzhou City, Fujian Province, a teacher was doing nucleic acid The sampled students cheered and cheered, the children were a little nervous and closed their eyes.   The Fujian Provincial Department of Education and the Provincial Health Commission jointly i 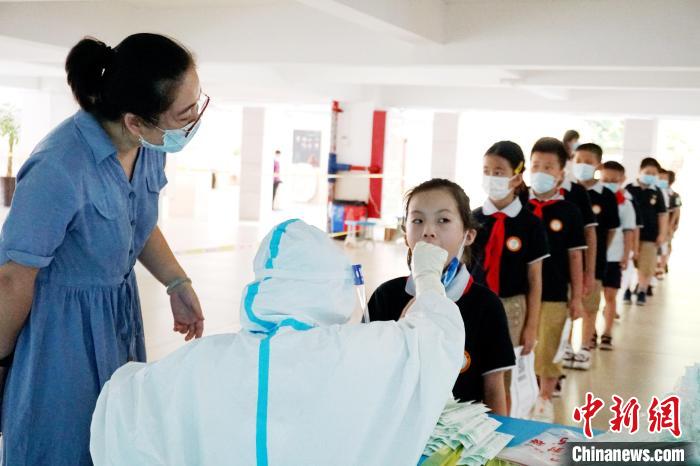 China News Service, Fuzhou, September 15 (Ye Qiuyun) "1, 2, 3, 4, 5... Alright." At 15:00 on September 15, at the Wenquan Primary School in Fuzhou City, Fujian Province, a teacher was doing nucleic acid The sampled students cheered and cheered, the children were a little nervous and closed their eyes.

The Fujian Provincial Department of Education and the Provincial Health Commission jointly issued the "Notice on Further Doing a Good Job in the Prevention and Control of School Epidemics in the Fall Semester", requiring schools at all levels and types to organize all teachers, students and employees to complete a new round of nucleic acid before September 19 Inspection work.

Recently, more than 2,500 schools, more than 1.8 million teachers, students and their employees in Fuzhou have launched nucleic acid testing.

"Ah...open your mouth, it will be fine in a while." At the nucleic acid test site of Wenquan Elementary School, the second and third grade children lined up in a neat queue and moved in an orderly manner.

The medical staff present sighed, looking at their immature faces and serious expressions, it was really cute.

On the same day, Wenquan Elementary School set up a temporary testing point in the school, and carried out nucleic acid testing for all 3,401 teachers, students and employees of the school.

On the same day, Wenquan Elementary School set up a temporary testing point in the school, and carried out nucleic acid testing for all 3,401 teachers, students and employees of the school.

The reporter saw at the scene that, except for individual students who are nervous and need to be guided by the teacher, the entire sampling process for each student was less than 10 seconds before and after.

Wu Xiang, a teacher at Wenquan Elementary School, told reporters that the children were very cooperative. Although some students were nervous, they were very brave to complete the nucleic acid test through encouragement.

"When the children are nervous, we will follow the children's thoughts and instruct the medical staff not to be so heavy, gently, faster, etc., the children will relax a little."

The Fujian Meteorological Observatory issued a high temperature forecast at 12:00 on September 15. Due to the combined influence of the typhoon’s surrounding sinking airflow and the subtropical high pressure, the highest temperature in some urban areas in central and western Fuzhou, Putian, central and southern Quanzhou, Xiamen, Zhangzhou, and eastern Longyan on the same day 35~37℃, local 38℃.

Pictured: Doctor Lin Zhiming (first from right) sprays alcohol to cool down medical staff who are sampling nucleic acid from time to time.

In the hot weather, the medical staff at the scene wore airtight protective clothing, isolation gowns, thick latex gloves, goggles, and masks. The children all saw it.

Zheng Minhao, a fifth-grade student of Wenquan Primary School, said that watching the aunts so hard, although they would be afraid of nucleic acid testing, they would try their best to cooperate so that they can rest earlier.

In order to help the medical staff who are taking nucleic acid samples to cool down, doctor Lin Zhiming from Huqian Community Health Service Center in Gulou District, Fuzhou City walked to the side from time to time and sprayed them with alcohol.

He said that the staff wearing protective clothing is very stuffy and can only spray alcohol on their backs for the purpose of cooling down. Part of the heat can be taken away when the alcohol evaporates.

At around 16:00, the nucleic acid sampling of all teachers, students and staff of Wenquan Elementary School was over, and Fang Qiuping, a nurse, was sorting out the sampling tools at hand.

She said that for nucleic acid sampling in school, she often meets some nervous children, and gentle communication can help them relax.

At present, the situation of the epidemic situation in Putian, Fujian is severe and complicated. The transmission chain of the epidemic has spread to Xiamen, Quanzhou and other places. Many school students or their parents need to stay at home due to travel to medium- and high-risk areas.

Isolate the epidemic without isolating warmth.

Wang Zhihong said that in response to this situation, the school established a home isolation group with each class as a unit. Teachers, students and parents of all subjects are among them. It will also answer questions that students encounter during the learning process.

"Allow parents to ease their anxiety and worry that their children will not be able to keep up with the progress of their studies when they return to school. This is more conducive to the development of epidemic prevention and control." Wang Zhihong revealed that the school is also preparing for the online teaching experience in 2020. This year's online teaching work is prepared for emergencies.