Queen Letizia has been away from her profession as a journalist for 15 years, but the information bug is still there. Not in vain has he exercised the Honorary Presidency of the acts of the c 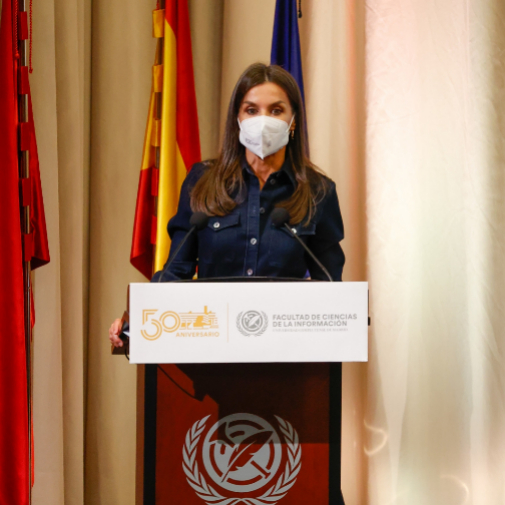 Queen Letizia has been away from her profession as a journalist for 15 years, but the information bug is still there.

Not in vain has he held the Honorary Presidency of the events of the fiftieth anniversary of the Faculty of Information Sciences of the Complutense University of Madrid, where he studied and graduated in 1995.

Almost as an early birthday present (the monarch turns 49 tomorrow), the Queen has been recognized as a UCM Student of Honor.

The presence of the Queen in this commemorative act has not been without some controversy, since today the classes of the faculty have been suspended and the passage with vehicles has been prevented until after 2:00 p.m.

The Faculty of Information Sciences of the Complutense University of Madrid was born on September 14, such a day as today in 1971 (it was when Decree 2070/1971 was published in the BOE by which the studies of Information Sciences were regulated ), and it is the oldest and with the most students in Spain in university communication training, with 300 teachers and more than 5,000 students.

More than 60,000 professionals trained at the institution have passed through its classrooms throughout its history, among whom Queen Letizia was confused in her day, when she was just another student.

The event was led by the Rector of the Complutense University, Joaquín Goyache Goñi, and the Dean of the Faculty, Jorge Clemente Mediavilla, and other authorities attended, including Minister Manuel Castells, academics, academics, managers from the professional sector and representatives of the teaching staff.

The Queen at one point in her speech on the 50th anniversary of the creation of the Faculty of Information Sciences' of the Complutense University of Madrid.

In her speech, the Queen began with a string of thanks and revealed her most personal side.

He has acknowledged that since last night he knew what was going to happen to him: "Coming every day every five years in the 90's leaves a mark, and you know what I'm talking about," he acknowledged, alluding to the cloister and former colleagues present there.

"I still remember what I felt when I received that letter on letterhead, in the mailbox, that said that we were admitted to the Faculties of Information Sciences, after having passed the Selectivity, which sounds like another centuries, because it is "recalled the visibly excited monarch.

Inevitable for the Queen not to share any more memories.

"I learned to use the typometer, to count cyceros, and many more things. I learned a lot in the classrooms and outside of them ... The cafeteria, what am I going to tell you".

And even a more personal one: "I remember in fourth or fifth grade, when a professor, already a little fed up, said to me almost shouting: 'Ortiz! Look, of course I don't know what will become of your life, but heavy [ for asking, out of curiosity], he has no rival '".

Curiosity that continues in Doña Letizia.

"Curiosity does not go away, but now I no longer count the answers they give me," he declared, raising a murmur and laughter among the attendees.

As a culmination, a phrase to remember, which says a lot about her role as sovereign consort: "Thank you Dean, for inviting us to think that 50 years is a beautiful figure to continue trying to do things well in the place where each one corresponds to us ".

Doña Letizia with a Hugo Boss dress that she has already worn on other occasions, this time with a belt and red shoes.

Queen Letizia has chosen for such an emotional occasion a simple and sober outfit, consisting of a long-sleeved shirt dress and a long midi denim fabric.

The touch of personal style has been given by a very thin belt in red, a color to match the stilettos.

The denim dress is from Hugo Boss and has been with her since 2018. On other occasions she has worn it with a belt and cream-colored shoes, like last April of this year.

PsicoLeonor is not the only one who is leaving.

LifestyleDo you want to be a mother?

This is how Covid has changed fertility treatments