China News Service, September 12th. According to the website of the Central Meteorological Observatory, the Central Meteorological Observatory will continue to issue a typhoon orange warning at 18:00 on September 12: The center of the 14th typhoon "Sundu" (super typhoon class) this year is today (12th) At 5 o'clock in the afternoon, it is located on the southern part of the East China Sea, about 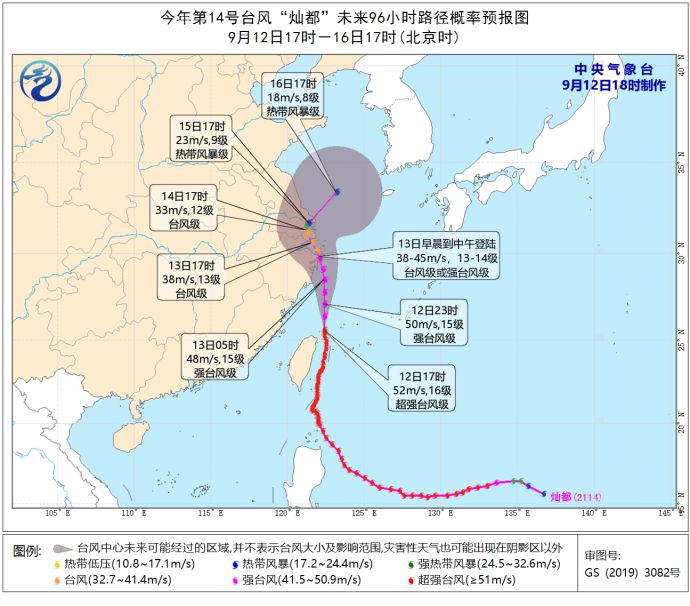 China News Service, September 12th. According to the website of the Central Meteorological Observatory, the Central Meteorological Observatory will continue to issue a typhoon orange warning at 18:00 on September 12: The center of the 14th typhoon "Sundu" (super typhoon class) this year is today (12th) At 5 o'clock in the afternoon, it is located on the southern part of the East China Sea, about 430 kilometers south of Xiangshan, Zhejiang. It is 25.6 degrees north latitude and 122.4 degrees east longitude. The maximum wind force near the center is 16 levels (52 m/s). The radius of the first wind circle is 220-300 kilometers, the radius of the tenth wind circle is 100-150 kilometers, and the radius of the twelfth wind circle is 50-70 kilometers.

It is expected that "Sandu" will move northward at a speed of about 25 kilometers per hour, and land on the coast from Zhoushan to Xiangshan in Zhejiang Province from morning to noon on the 13th (38-45 m/s, 13-14 level, typhoon level or Severe typhoon level), or pass the coastal waters of Zhoushan into Hangzhou Bay. On the 14th to 15th, the sea surface or the area near Hangzhou Bay will whirl and move less. It will turn to the northeast on the 16th, and the intensity will gradually weaken.

Gale forecast: 20 o'clock on the 12th to 20 o'clock on the 13th, the central and southern part of the Yellow Sea, the East China Sea, the Taiwan Strait, the Bashi Strait, the east of Taiwan, the coast of Taiwan Island, the north coast of Fujian, the east of Zhejiang, Shanghai, the east coast of Jiangsu, and Hangzhou Bay There will be strong winds of 6-8 in the Yangtze River Estuary. Among them, there will be winds in the east of Taiwan, the East China Sea, the southern Yellow Sea, eastern Zhejiang and its coastal areas, Shanghai and its coastal areas, the coastal areas of southeastern Jiangsu, the Yangtze River Estuary, and Hangzhou Bay. The wind force can reach level 9-11, some sea areas and regions can reach level 12-14, and the wind gust can reach level 15-16. The nearby sea area or area where the typhoon center passes has level 15-16, gust 17 and above.

Some of the above areas are accompanied by short-term heavy precipitation (the maximum hourly rainfall is 20-50 mm, and the local area can exceed 60 mm), and there are strong convective weather such as thunderstorms and gales in the local area.

1. The government and relevant departments shall do a good job in typhoon prevention and emergency response in accordance with their duties.

2. Water operations in relevant waters and passing ships should return to the port to avoid wind, strengthen port facilities, and prevent ships from anchoring, grounding and collision.

4. Reinforce or dismantle structures that are easily blown by the wind. People should not go out at will. They should stay in a wind-proof and safe place as much as possible to ensure that the elderly and children stay in the safest place at home, and those who are in dangerous houses are transferred in time.

When the typhoon center passes by, the wind will decrease or stay still for a period of time. Remember that strong winds will blow suddenly, and you should continue to stay in a safe place to avoid the wind, and people from dangerous houses should be moved in time.

5. Relevant areas should pay attention to preventing mountain torrents and geological disasters that may be caused by heavy rainfall.