"The master who resigned to join the police is interesting and wants to learn from him again" Xu Longxuan at work The diary of Xu Longxuan, a police academy intern   Recently, a birthday note for a police academy internship became popular! From “it’s so boring to be assigned to the police station” to “it turns out that the white hair of the master was staying up late”... the daily humor of th 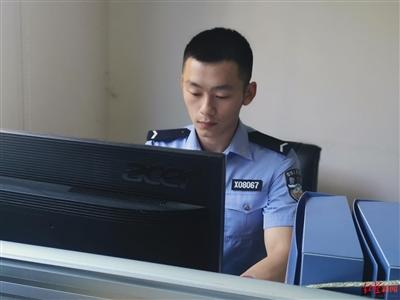 The diary of Xu Longxuan, a police academy intern

From “it’s so boring to be assigned to the police station” to “it turns out that the white hair of the master was staying up late”... the daily humor of the two “mentors and apprentices” in the police station has a slightly sour work diary, reflecting the ups and downs and ordinary work of the police at the grassroots police station. , Perseverance and dedication, moved many netizens.

The reporter learned that the intern who wrote the diary was Xu Longxuan, from the Sichuan Police College, and came to the Jiangyou City Public Security Bureau in Mianyang, Sichuan for an internship in August this year; the "Master" in his diary was named Guan Xinuo, who was from the Jiangyou City Public Security Bureau. A policeman at the Taiping Police Station, 32 years old this year.

On September 12, the reporter contacted the pair of "police mentors and apprentices."

"Xiao Xu has a lively and cheerful personality. As a police academy intern, he is more able to endure hardships, is enthusiastic and caring for work, and is brave when performing tasks together." Guan Xinuo commented on the apprentice.

"After the internship is over, I have to return to school to prepare for the police recruitment exam. I want to be a good policeman like Master, and if I have the opportunity, I want to return to Master to continue studying." Xu Longxuan said.

Recording the work of the police station is humorous and warm, attracting hot discussion from netizens

Xu Longxuan's first internship diary was written on August 23, 2021, which was also the first day of his internship at the Taiping Police Station of Jiangyou Public Security Bureau.

On August 24, Xu Longxuan went to police with Guan Xinuo for the first time to mediate family disputes.

The diary of the day wrote a little humorously: "Following master to mediate disputes, the two have been arguing, I can't even get in the mouth, the master's marriage is still unfinished, and the girlfriend seems to have not been found. In the end, the mediation was perfect?? "

"Master took me into the community today. The uncles and aunts in the neighborhood are very enthusiastic about Master, and a few even wanted him to be his son-in-law. Only then did I realize that his age is a round older than me, and he is not 25 years old. Tiger."

The internship diary written later reflects the real work of the police station.

In his diary on September 4, Xu Longxuan recorded that he and his master stayed up all night and worked overtime. During the day, he slept and master continued to work overtime.

He wrote in his diary: "Let me just say, his white hair is staying up all night, it's not like he said, it was me who got angry."

The reporter combed and found that the entire internship diary not only records the warm daily life between the pair of masters and apprentices, but also reflects the ordinary work of the grassroots police station, the perseverance and dedication of the police, and the language is humorous.

Netizens have commented on this pair of mentors and apprentices:

"It's all trivial things. I saw the hard work and difficulty of the grassroots police, and I paid tribute to them."

"There is no loss of humor in rigorous work, and greatness in ordinary life."

"I felt funny at first, and then felt sorry for the policemen on the front line after laughing."

The apprentice was moved:

I want to be a good policeman like Master

Talking about his internship diary, Xu Longxuan bluntly did not expect it to be "fire".

He originally wanted to go to the Criminal Police Team, because he felt that solving the case was challenging, "still handsome!".

But after a period of internship at the Taiping Police Station, he felt that the work of the police station was simple and complicated.

And Xu Longxuan, who has always wanted to be a criminal police officer, has been with the "interesting" master for a while, and feels that the work here has become "interesting": Although the work in the police station is not as passionate and cool every day, many times the face is trivial and short-lived. "Little things", but a smile and a greeting from ordinary people to him and Master can make them happy for a long time.

Before working as a policeman, he graduated from Jilin Agricultural University. After working in Beijing for two years, he resigned and applied for the Jiangyou Public Security Bureau.

Master’s hometown is thousands of miles away in the northeast. After graduating from the police academy, he went to work in the Jiangyou Public Security Bureau. After several years of training, Master’s grassroots police station has very rich working experience.

Because of his busy work, Guan Xinuo can only go back to the northeast to visit his parents once in a year or two, which is not easy.

With moving and feelings, Xu Longxuan uploaded his internship diary to the Internet.

Regarding the apprentice Xu Longxuan, Guan Xinuo said that he had always cared for Xiao Xu as a child, but he would severely criticize Xiao Xu when there was a mistake in his work.

"Xiao Xu has a lively and cheerful personality. As an intern, he is more able to endure hardships, is enthusiastic and caring for work, and is brave when performing tasks together," he said.

Xu Longxuan said that after the internship, he will go back to school to prepare for the police recruitment examination. His ambition is to become a good policeman like a master.

If there is a chance, he still wants to return to Master to continue learning.