Make a big ambition, don’t follow blindly, cut off the Internet... the principal starts the "First Class in University"

Chinanews client, Beijing, September 12th (Ren Jing) It is another year's school season, and the opening ceremonies for freshmen from major colleges and universities are arriving as scheduled. The principals talked about ideas, studies, and aspirations in the "First Class of the University", inspiring college students to establish their ideals and assume great responsibilities. How to become a h 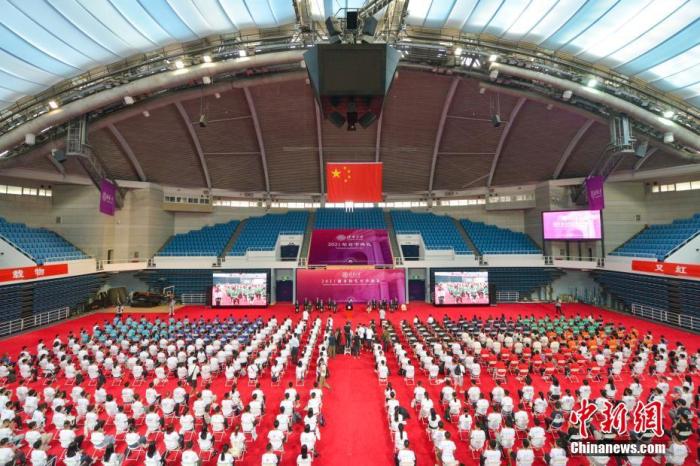 Chinanews client, Beijing, September 12th (Ren Jing) It is another year's school season, and the opening ceremonies for freshmen from major colleges and universities are arriving as scheduled.

The principals talked about ideas, studies, and aspirations in the "First Class of the University", inspiring college students to establish their ideals and assume great responsibilities.

How to become a high-quality college student?

Listen to what the principals say!

The picture shows the site of the opening ceremony.

——Maintain the determination of "obedience to benevolence and no violation"

Saying goodbye to high school and going to college means leaving the family to live alone.

Many students are at a loss and do not know how to plan their future college life.

Zeng Yong, president of the University of Electronic Science and Technology of China, told more than 5,000 freshmen that the first thing to do when entering the university is to adapt to the life and study of the university. Suffering." He reminded students to improve their ability to live independently, "The ability to live independently will affect the formation of your independent personality, and it will also have an important impact on your future life choices."

After the body is independent, personality independence is also particularly important.

Qiu Yong, the president of Tsinghua University, told the freshmen the story of Zhu Ziqing. In 1948, the impoverished Mr. Zhu Ziqing did not hesitate to sign the "Protest against the U.S. Policy of Helping Japan and Refusing to Receive U.S. Aid Flour." The iron bones and the awe-inspiring righteousness interpret the noble personality of "Ning to be honest and upright in order to be self-clean", in order to encourage everyone to form an independent personality.

He hoped that his classmates could, like Zhu Ziqing, cultivate the temperament of "externally moisturized but internally chaste", stand upright with the pride of "Ling Han alone", maintain the determination of "obedience to kindness and no violation", and achieve a more realm of life.

Wu Jianping, President of Huaqiao University, gave the freshmen the "First Class in University" with the title of "Finding the Right Direction and Moving Forward".

The opening ceremony of the University of Electronic Science and Technology of China.

——We must "disconnect the internet" from time to time

As a student, learning is the top priority.

Naturally, it has become a high-frequency vocabulary in the "Principal's First Lesson" at the beginning of school.

"Human learning has always known that it is not natural to learn; everything depends on its own destiny, and he has to be wise." Talking about the importance of learning, Shanghai University President Liu Changsheng quoted two sentences from "Encouraging Learning".

In his view, being good at learning is the foundation of growth, the source of talent, a weapon for future development, and the key to overcoming "capacity panic."

Li Yanrong, president of Sichuan University, suggested that students should "be the first to learn general knowledge."

He believes that general education is a bridge extending in all directions between various disciplines.

"Learning more about the history of science and technology and the history of human civilization in college, and understanding the origin of mankind and the relationship between man and nature, you can have a sense of taking a bird’s eye view of the changes in world technology and human civilization from the height of human history. Standing on the shoulders of predecessors, especially scientific giants."

As for how to learn, Guo Lihong, the president of Northwest University, hits the key point-often "disconnecting the Internet" to himself.

In his view, the rapid development of information technology, the unprecedented advancement of audiovisual methods, and the popular application of social software have led to a decline in self-control, distraction, and indulging in social networks.

He hopes that everyone can "disconnect the Internet" frequently and devote their limited energy to truly meaningful things.

Only by spending a certain amount of time to comprehensively, systematically and deeply master the knowledge of a certain field can we build a solid and complete knowledge system in the brain.

The opening ceremony of the 2021 freshmen of Huaqiao University was held on September 5 at the Quanzhou and Xiamen campuses in Fujian.

——Only with high ambitions can we become an advanced in society

At the opening ceremony, the principals called on the students to set up their ideals, make great ambitions, fight bravely, assume great responsibilities, and contribute their own strength to the development of the motherland.

In the face of nearly 5,000 freshmen, Ge Shirong, president of China University of Mining and Technology, proposed "aspiration to stay high and dare to be the first in the world."

He told his classmates, “Only if you have high ambitions, you can become an advanced society.” After graduating from the 2017 undergraduate graduate Cao Weiguo, he took the initiative to ask Ying to work in the border areas, and volunteered to take root in the deeds of the public security officers at the grassroots level, encouraging students to compete with each other. Dream, diligently strive for the first.

Meng Fanhua, the principal of Capital Normal University, encouraged everyone to work hard and persevere in order to be a fighter for lofty ideals.

He believes that the mission of national rejuvenation must be borne by struggle, and the sail of life's ideals must be raised by struggle.

"Struggle is the ladder of personal growth and the journey to achieve the value of life. Only those who start and act, struggle, and enterprising, bravely embark on a new journey, can you walk the new Long March that belongs to you well, and achieve meaningful and meaningful achievements. A worthy and wonderful life."

Ma Huaide of China University of Political Science and Law told the students to have the ambition to "set up a heart for the heavens and the earth, set a destiny for the life and the people, for the sacred and sacred learning, and create peace for all generations", and always closely link the personal future with the destiny of the country and the nation.