This is the story of a Tibetan teacher and his more than 200 Salar students...

Author: Hu Guilong Qi Xiujuan   The school named Laitang is located in the middle of a mountain. A classroom, a dormitory and a simple playground are all of the school.   Thirty-one years ago, a Tibetan teacher came to the school and assumed the task of teaching all the courses from kindergarten to the first grade of elementary school.   Thirty-one years later, under the careful cultivation o 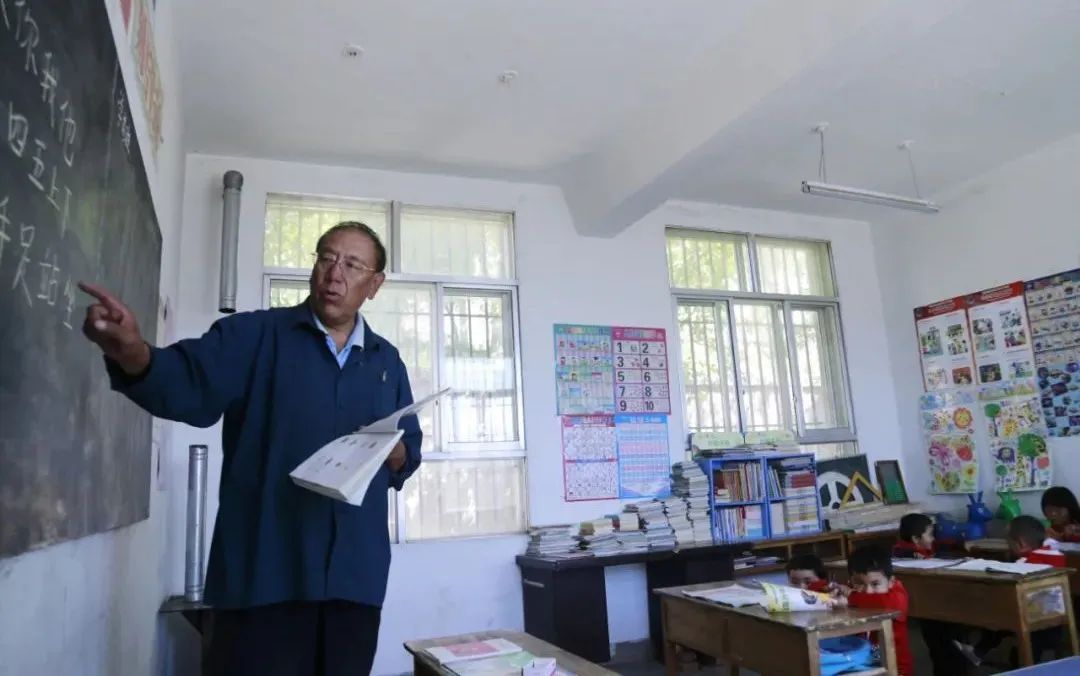 The school named Laitang is located in the middle of a mountain. A classroom, a dormitory and a simple playground are all of the school.

Thirty-one years ago, a Tibetan teacher came to the school and assumed the task of teaching all the courses from kindergarten to the first grade of elementary school.

Thirty-one years later, under the careful cultivation of teachers, more than two hundred Salar students walked out of the mountains from here to complete their studies in the county school.

The teacher is giving a lecture.

The teacher is 58 years old this year. When he came here, he was still a handsome guy.

Nowadays, the hairline is shifting, and he is a little bald. He is about 1.8 meters tall and he walks with a hunchback.

The imprint left on him by the years is deeper than that of his peers.

The school is more than 20 kilometers away from the county seat in the Naoshan area.

In Laitang Village, the villagers have spoken Salar for generations, and the teacher was born in Yamu Village, Daowei Tibetan Township, Xunhua County, and speaks ordinary Mandarin but only Tibetan.

Here, the youngest student is 3 years old and the oldest is 7 years old.

Look at the picture with the students.

The teacher is giving a lecture.

"This will delay the children, the kindergarten period is very important." Looking at the children's immature faces in the classroom, the teacher secretly made up his mind: We must learn Sala.

"Start from the simple Salar language'You are here'." The teacher recalled, looking for neighbors to learn, sometimes from the village chief.

Every time the villagers spoke a word of Salar, the teacher recorded it in the book with Chinese characters with similar pronunciation. As the day passed, the teacher accumulated several thick books.

From not understanding to being able to understand a word and a half, the teacher spent nearly two years.

Nowadays, I have mastered 90% of Salar, and it took the teacher nearly 10 years.

"There are words like snake and fox in Salar, but the pronunciation of'tiger' is the same as the pronunciation of Chinese. During learning, I also found that some words are similar to the Tibetan pronunciation, which made me take a lot of'shortcuts'. At first, the Salar language was not standard. , But also caused a lot of jokes." The teacher said.

The communication is smooth, and everything is simple.

After the teacher finishes the class in Mandarin, the difficult part is translated again in Salar, and the students will quickly grasp the essentials of knowledge.

Communicate with children in kindergarten.

"Crossing" the 8 kilometers from the top of the hill to the school, the teacher has walked for 12 years

Recalling that he had just arrived at Tang school, the teacher scratched his head unconsciously.

One day in April 1990, the county informed the teacher to report to the school.

Packed away the pens, documents, took a piece of steamed bun, and put a pot of boiling water on his back. The teacher left home early.

The only winding road leading to the school.

Yamu Village and Laitang Village, where the teacher lives, "face each other" across the mountain, 8 kilometers away.

On a winding mountain road, the teacher walked for more than an hour before arriving in the village. The teacher was 27 years old that year.

Walking into the village, no one came to pick him up. The teacher wandered around and saw a school sign hanging outside a house. He was very happy. "Although it is a school, it is only a thatched house."

"First grade students will be taught first, and then they will be taught to kindergarten children when they prepare for the text." The teacher said, so the blackboard in the classroom is also divided into two parts.

There is only one classroom and no extra room to serve as a dormitory. The teacher decided to "day study".

The sunrise comes out, and the sunset comes back.

In order to save time, the teacher sometimes takes a "shortcut"-over the top of the mountain, it rains, the shoes are covered with mud, and the footpath becomes more "heavy".

In that place, there is no bicycle, and the only way to take heavy objects up and down the mountain is to rely on mules to come to Tang Village, climb a few hills on foot, and go to the mountain for teaching. The difficulty can be imagined.

In 2003, when the road of hardening was passed, the teacher borrowed money to buy a motorcycle, and the problem of "difficulty" in getting home was solved.

In 2013, Laitang Village implemented the relocation project for poverty alleviation. Most of the villagers moved to the county town, and the children also moved to nearby schools. Only more than ten villagers remained. Now the school has only 9 students.

"The parents of these children were my students. I am leaving, what should I do with the children?" The teacher often thought.

After the relocation of Laitang Village, only a dozen households remained.

Ma Chenglong is the first college student taught by the teacher.

"When I was in school, the teacher would always carry a bucket full of milk that I squeezed by myself for us to drink. This made me fall in love with the school, who didn't like to learn, and would often be the first to wait for the teacher at school." Ma Chenglong recalled at home. When you make something delicious, you will immediately think of the teacher, and occasionally give him a bowl of noodles (a kind of special pasta in Qinghai), or give him a piece of oil cake. "The relationship with the teacher is getting better and better, and I often use Salar to speak to each other. say hello."

"One time when I returned to my hometown and said goodbye, the teacher gave me a hundred yuan, saying that it was his little intention. At that moment, I secretly determined in my heart that I must study hard, which is regarded as repaying the teacher's education." Speaking of this, Ma Chenglong has already red eyes.

In the Tibetan New Year every year, the students taught by the teacher will send blessings through their mobile phones. Every time they turn to these characters on the mobile phone, the corners of the teacher's mouth will always rise.

"Students who have been taught will come to see me as long as they return to the village. Sometimes they can't come. They will give me red envelopes when the festival comes." The teacher said that when the Salars celebrate the festival, they would say blessings to them, and the villagers would also warmly invite them. I went to eat, just like my family.

Villager Ma Naibiyou sighed, "Without a teacher, the doll can't go to school. The teacher taught 5 people in our family."

31 years of teaching age, so that they are not relatives better than relatives

With the support of the local education department, Laitang School already has a brick-and-concrete school building. The flowers planted by the teacher in the yard are blooming brightly. Not far from the children’s slides and swings, the children are playing. A few big poplar trees cast a mottled light and shadow.

"I received 50 yuan in salary for the first month of teaching." The teacher recalled that this salary also pays for school electricity, which is sometimes higher than salary.

Relevant departments of Xunhua County have solved the staffing for teachers many times, but the teacher has not been able to join the staffing because of academic qualifications.

Starting in May of this year, the monthly salary of teachers has risen to 2,250 yuan.

Relatives and friends also persuaded the teacher to go to a place close to home to teach, but the teacher said that although he was a temporary teacher, he had been in the village for a little while and was reluctant to leave.

The students are playing.

Time always flies quickly, and it's time for get out of class.

I heard someone shouting, "Teacher, I'll pick up the child, go, and eat at our house." "No, I have a visitor today, and I will go another day." The teacher smiled and waved his hand.

The students are playing.

"I never thought about retirement. As long as there are children in the village, I will continue to teach."

He looked at the remnants of the dirt wall on the old school site in the distance and recalled the scene when he first arrived at school. The children happily lined up for school, waiting for the teacher to tie them red scarves, and then raised the national flag, went to class together, and did it together. game……

The teacher's name is Wan Ma Renzeng, and he is dedicated to dedication and dedication in the 2021 "China's Good People List".