Emirati female journalists: Leadership's belief in women's capabilities is behind their achievements

Emirati female journalists confirmed that women have been able to achieve outstanding successes in the media field in the country, and to reach leading and advanced positions, thanks to the belief of the state leadership in the capabilities of women and the importance of the role that they can play in various fields, and thanks to the efforts of Her Highness Sheikha Fatima bint Mubarak, President 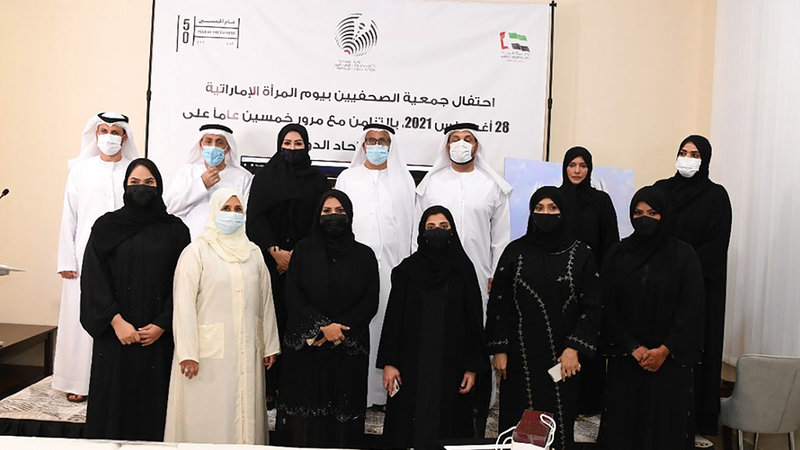 At a celebration of the "Journalists Association"

Emirati female journalists: Leadership's belief in women's capabilities is behind their achievements

Emirati women have been able to achieve outstanding successes in the field of media in the country.

Emirati female journalists have confirmed that women have been able to achieve outstanding successes in the media field in the country, and to reach leading and advanced positions, thanks to the country’s leadership’s belief in the capabilities of women and the importance of the role that they can play in various fields, and thanks to the efforts of Her Highness Sheikha Fatima bint Mubarak, President of the Women’s Union General Chairwoman of the Supreme Council for Motherhood and Childhood and Supreme Chairwoman of the Family Development Foundation (Mother of the Emirates), since the beginning of the union until now, and what she has set as a role model and a unique model for the daughter of the Emirates to emulate in ambition and hard work for the sake of the nation's elevation. Emphasizing that men's support and support for women is a pivotal factor in continuing their path of success in all sectors, and achieving a balance between their professional role on the one hand and the social role as a wife and mother on the other.

A group of Emirati female media professionals, during the celebration organized by the Journalists Association yesterday evening at its headquarters in Abu Dhabi, on the occasion of "Emirati Women's Day 2010", which was broadcast via visual communication technology, and presented by Fatima Al Darmaki, reviewed aspects of their career in the field of journalistic and media work in the country. .

The media figure, Fatima Al-Hudaidi, indicated that working in the media field is not easy, and the road was not paved with roses, but the encouragement of leadership and its belief in women in all fields, and the support, empowerment and rehabilitation it provided to them was an incentive to overcome these difficulties and overcome them. She pointed out that the pioneering role of Her Highness Sheikha Fatima bint Mubarak in pushing women to participate in building and developing society, and the struggle of Her Highness to eradicate illiteracy, and the continuous hard work was reflected in the successes of the Emirati girl and her assumption of the highest positions until she became an astronaut, pointing out that there are more than 26 books about Emirati women and their career, the most recent of which is “This is how Fatima bint Mubarak spoke,” issued by the National Archives.

Al-Hudaydi considered that today's generation is more fortunate, and it must seek its true talent and enhance its desire for science and work, because of its unlimited support, which is confirmed by the phrase "Do not disturb them" by His Highness Sheikh Mohamed bin Zayed Al Nahyan, Crown Prince of Abu Dhabi and Deputy Supreme Commander. of the Armed Forces.

She called on young people wishing to get involved in the media field, to search for and develop real talent, and to continue reading and learning in various sciences to enter the next fifty with appropriate tools.

The media, Rahma Salem, spoke about her media career, which spanned over 19 years, pointing out that she started in Al Ain in 2001, and there were several difficulties, most notably the lack of acceptance of the presence of a woman journalist with men at work, then she moved to work in the Zayed House for Family Care, She worked there for seven years until the house was included in the Zayed Foundation for Humanitarian Care, and she was the only female member of the Al Ain Club for People of Determination.

She pointed out that working with people of determination was an additional source of happiness for her, as she introduced their achievements and their exceptional talents and capabilities.

The media, Maryam Muhammad Al-Rumaithi, presented her career in the field of military media, stressing that all the achievements of the Emirati woman are due to the support of the wise leadership for women and for the sons of the country, both men and women, who set her first goal to build the human being.

The media, Fida Morshed, pointed out that the official support was an incentive for women to reach the highest positions.

Pointing out that during her career that spanned nearly 20 years, she presented works that she cherishes, such as the cartoon character "Captain Saqr", the Emirati football player, whose stories were published in Majid magazine and met with great success among readers.

She also participated in many plastic exhibitions with her artwork.

For her part, the specialist in Emirati women's affairs, Dr. Ihsan Al-Masiri, called on media officials not to be satisfied with addressing prominent models on the scene, and to work to shed light on women's experiences that are still in the shadows, and include many influential and distinctive stories that reveal the sacrifices of these women from for their families.

She added: "The Emirati woman's experience and achievements are clear, and it is a distinctive experience that gained its distinction from the wisdom of the founding father, Sheikh Zayed bin Sultan Al Nahyan, may God rest his soul, and how he worked to adapt customs and traditions for the benefit of women with an exceptional gradation that suits the nature of society at that time, and began with education, As a result of this wise policy, women have reaped and are still reaping a lot thanks to the support of the state and the leadership, but on the social level we still need the support of men.”

Al-Masiri considered that women are now living their golden age, and said: “When I started my career in the Emirates News Agency, at the beginning of the millennium, that period was called the period of preparation for the golden age, as Her Highness Sheikha Fatima focused her efforts and the efforts of the Women’s Union and Women’s Associations in the country, on preparing women from Through many local, regional and international initiatives, through my work in women’s affairs, there has been extensive work at the Arab level.”

The Chairman of the Board of Directors of the Emirates Journalists Association, Mohammed Al Hammadi, indicated that Emirati women receive great attention from the wise leadership, especially with the support of Her Highness Sheikha Fatima bint Mubarak, President of the General Women's Union, President of the Supreme Council for Motherhood and Childhood, and Supreme Chairwoman of the Family Development Foundation (Mother of the Nation). Her Highness launched the slogan to celebrate this day for the year 2021, to be “Women Ambitious and Shining for Fifty.” From this point of view, the Association celebrated Emirati women in the press and media sector in appreciation of their great giving and efforts in serving their community, and fulfilling its noble mission.

"Today, we send expressions of appreciation, praise and pride to all female journalists who chose to work in the profession of trouble, and have become a real addition to the press," Al Hammadi said.