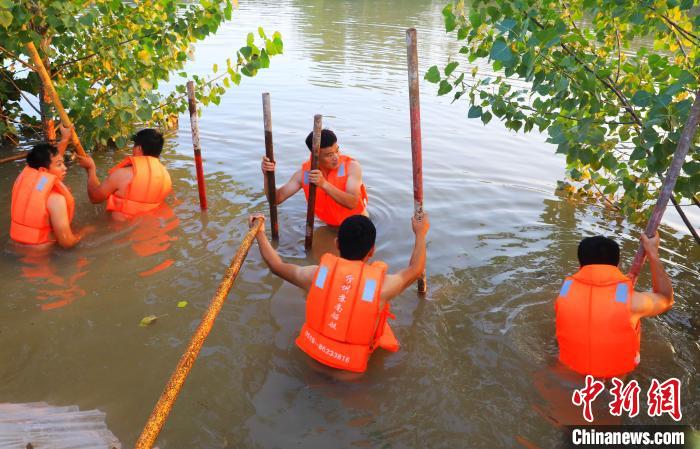 China News Service, Zhengzhou, August 28 (Reporter Li Guigang) The reporter learned from the Zhoukou special press conference of the "Henan Province Speeds up Post-disaster Reconstruction" series on the 28th that nearly 8 million mu of unaffected autumn grain growth in Zhoukou, the largest grain-producing city in the province It is gratifying, showing a trend of increasing production, which is expected to make up for it.

The picture shows the front line of flood prevention and relief in Zhoukou.

This year, Zhoukou’s autumn grain planting area was 9.576 million mu, an increase of 36,000 mu over the previous year. It was also the largest planting area in Zhoukou in recent years.

So, affected by the floods, can Zhoukou's grain production goals and tasks this year be completed as scheduled?

In this regard, Zhang Hua said that although it was severely affected by the disaster, a comprehensive analysis and judgment showed that the basis for sustained and stable autumn grain production this year still exists.

On the one hand, this year’s high-yield corn planting area reached 7.463 million mu, an increase of 601,000 mu over the previous year. Although part of the disaster was affected, the area of ​​corn, a high-yield crop, has increased significantly and has great potential for increasing production. This alone is expected to increase output by 400 million. On the other hand, nearly 8 million mu of autumn grain crops that were not affected by the disaster are currently growing well, showing a trend of increasing production. If there are no more extreme weather in the later period, it is expected to partially compensate for the disaster loss and apologize.

In addition, the total output of summer grains this year is 11.081 billion catties, an increase of 115 million catties over last year.

Therefore, it is expected that the annual grain production target and task can still be fulfilled in the year of catastrophe.

In this flood disaster, the situation of the affected people, especially those who have been lifted out of poverty, has attracted much attention.

In this regard, Hu Guosheng, director of the Rural Revitalization Bureau of Zhoukou City, said that the floods caused 268 poverty alleviation villages, 95,300 poverty-stricken people and monitoring targets in Zhoukou City.

The picture shows the front line of flood prevention and relief in Zhoukou.

In order to ensure that the affected people do not return to poverty due to the disaster, Zhoukou City included 516 eligible households with 1,838 persons into the monitoring targets for poverty return in a timely manner, established monitoring and assistance accounts for each household, and formulated and implemented targeted assistance measures to ensure timely elimination of poverty. Poor risk.

At the same time, 2.205 million yuan of living allowance was provided to the 31,500 people who have been severely affected by the disaster and the monitoring targets.

"After investigation, Zhoukou City will not have the problem of returning to poverty due to this flood disaster." Ma Jianping said that Zhoukou City implemented transfer of employment and relocation of 2,162 people to public welfare positions for the employment of migrant workers affected by the disaster.

For the 178 poverty alleviation industrial projects damaged by the disaster, 19.43 million yuan will be allocated as a priority for restoration and reconstruction funds to speed up the resumption of work and production.