From unpopular to popular, what "cheats" do these niche museums have? 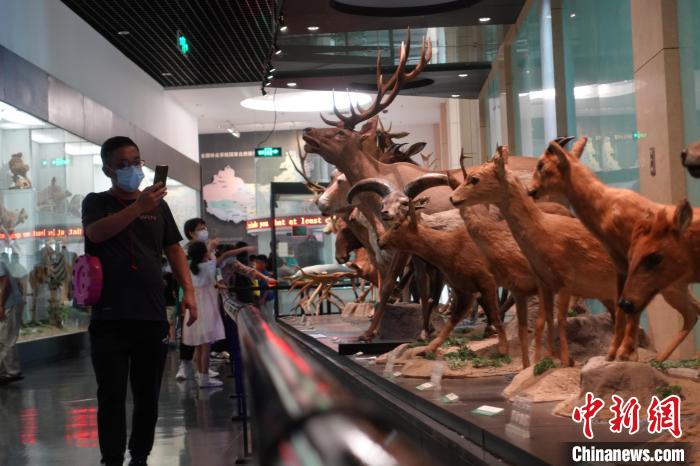 problem: from popular to unpopular, so what these niche museum "smoke powder Cheats"?

How do special museums attract audiences to visit?

A reporter from Chinanews.com will take you into some “niche” museums to see their fancy “cheats for sucking fans”.

The audience was photographing exhibits in the National Zoological Museum.

The collections of specialized museums are often a concentrated display of items in a certain field, and their professional irreplaceability has firmly captured the attention of many viewers.

During the summer vacation, Liu Jiawen, a citizen of Beijing, took her son to visit the China Film Museum for the third time.

She said that she and her children like movies very much, and every time they come to visit, they always have to buy tickets to watch one.

"Today I also said that I must watch an IMAX animation."

It is understood that in addition to exhibits related to movies, the China Film Museum will continue to show various types of films in the theaters of the museum, and regularly organize special film exhibitions. This combination of exhibitions is the "hard qigong" practiced by the film museum. , It has really attracted a lot of movie lovers to continue to visit.

Like the film museum, there is also the National Zoological Museum, which is famous in the scientific community for its collection of specimens. There are more than 8.93 million specimens of various types of animal specimens, and the collection covers the major groups and representatives distributed in our country. Sexual types.

The specimen is the "golden sign" of the museum to attract tourists.

Zhang Jinshuo, deputy curator of the National Zoological Museum, told a reporter from Chinanews.com that all the specimens in the museum that visitors can see are stripped specimens, which are more vivid than the fake stripped specimens used in scientific research, and some also simulate animals. The state of survival while still alive allows the audience to observe the details of the animal's characteristics at a very close range.

During the interview, the reporter met Ma Tao who was visiting the National Zoological Museum.

As a student of China Agricultural University, Ma Tao was attracted by the specimens before visiting the museum.

"I have only seen sporadic specimens in some museums before, and it is the first time to see so many at once," he said.

The audience visited the exhibits in the National Zoological Museum.

Maneuver 2: "Ba Duan Jin" to open up the meridian

Specialized museums often gather more professionals in the field. These academics not only show up frequently in the museum, but also walk out of the museum, walk into the campus, approach the media, and approach netizens, and through their own communication "meridians", Boost the audience's exploration boom.

In May of this year, Zhang Chenliang, director of the Social Media Center of China National Geographic, known as the "Tibetan Fox Director," visited the National Zoological Museum. The video of the museum attracted many young fans to visit afterwards.

For a long time, professionals like Zhang Jinshuo and Zhang Chenliang have devoted themselves to "packaging" the knowledge in the museum and attracting audiences to "check in".

For example, through the interpretation of hot events such as the northward movement of the Yunnan elephant herd and the escape of the Hangzhou leopard, the online science "up masters" have made more people interested in the living habits and environment of animals and plants, and then brought people into it. Related professional museums have brought a wave of attention to natural sciences.

The National Zoological Museum has established long-term cooperative relationships with some elementary schools. It not only invites students to participate in activities, but also sends staff from the museum to the school to give lectures.

"I went to elementary school to take popular science classes since I first started working at the National Zoological Museum, and I have persisted for 12 years." Zhang Jinshuo said.

According to him, the museum will also organize students to participate in scientific exploration activities and learn scientific research methods.

This kind of exploratory learning activity has played a good role in the social education of the museum. “Many students will make PPT to show when they share their learning results, as serious as participating in a formal defense. This method of sending out knowledge also attracts a group of students. Parents keep a long-term interest in the museum."

In addition, more and more professional "big coffee" in the field of museums are also joining the ranks of popular science.

The audience walked past an animal photography work in the National Zoological Museum.

How did the "niche" museum take advantage of the momentum?

In recent years, more and more specialized museums have sought differentiated development, committed to becoming the cultural business card of the city or a certain field, and inheriting the spirit of the city.

In the world heritage city of Quanzhou, the city’s Overseas Transportation History Museum exhibits ancient ships, religious stone carvings and export porcelain, showing the brilliant sailing achievements of the Song and Yuan dynasties; the Yangzhou China Grand Canal Museum uses ancient documents reflecting the canal theme through the past dynasties. Exhibits of cultural relics, such as paintings, calligraphy, and inscriptions, show the customs and natural changes on both sides of the canal.

“Museums must have exhibits that reflect the characteristics of the city and region in which they are located, and tell stories about the local area through exhibits. While pursuing digitalization, they must also work harder on physical exhibits instead of displaying the same type of exhibits as in the past. This kind of museum can become a local cultural'business card'." Zhang Jinshuo said.

This summer, the National Zoological Museum ushered in a significant increase in traffic.

Zhang Jinshuo said that people can't feel all the details of animals through the screen, they need to go into the museum to experience it for themselves.

"Faced with a specimen from a hundred years ago, people can have the feeling of communicating with scientific philosophers in an instant. This is the charm of the museum."

Museums that were once considered "niche" are becoming hard to find.