The action-comedy "Free Guy", inspired by the world of video games, retained the top spot at the box office in North American cinemas, after its second weekend, despite the decline in its revenues, reaching 18.8 million dollars, according to preliminary figures published by "Exby" company. 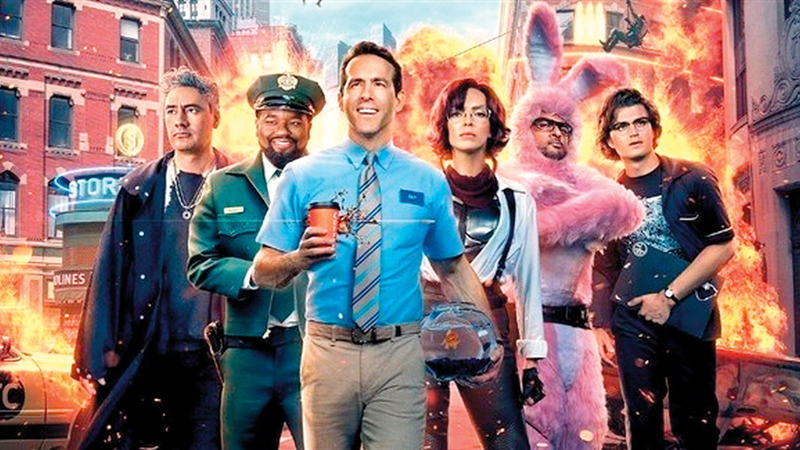 Action comedy film inspired by the world of video games.

The film addresses in a simplified way the boundaries between the virtual and the real, as it revolves around the story of a character in a video game played by Ryan Reynolds, who seeks to determine her own destiny, which leads to a glitch in the game that its creators believed was a well-designed one.

The earnings of this family comedy fell compared to the first week of its release, when it brought in about 28 million dollars.

However, experts considered that these results remain strong in light of the continued shadow of the “Covid-19” pandemic on the cinema sector, and Tropical Storm Henry in the northeastern United States prevented a section of the audience from going to theaters.

The film's cumulative gross of $112 million.

In second place was a new movie, "Paw Patrol: The Movie," which grossed $13 million between Friday and Sunday.

Variety magazine described as "honorable" the results of this animated film directed at young children who are still not eligible to receive vaccines against the Corona virus.

"Paw Patrol: The Movie" tells the story of a boy named Ryder and a group of brave puppies who help him rescue the inhabitants of the city of Adventureville from its evil mayor.

And the third place went to the adventure family movie "Jungle Cruise" from "Disney", which earned $ 6.2 million.

Inspired by a Disney theme park game, the film chronicles the adventures of Dr. Lily Haven (Emily Blunt) and her brother (Jeanne Whitehall) in the Amazon jungle.