House of Mohammed bin Khalifa.. Witness to the era of transformations in Al Ain

Al Ain is full of many historical sites and monuments that tell stories from the history of the Emirates and the region, and reveal the features of social life in previous periods. 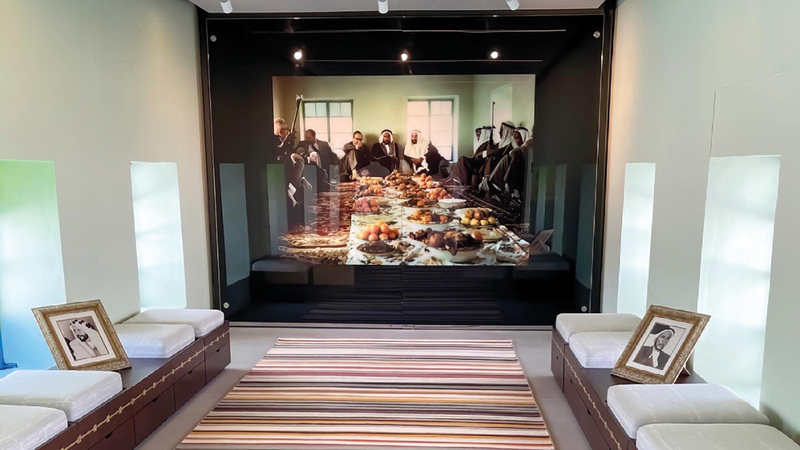 One of the sites included in the list of "UNESCO"

House of Mohammed bin Khalifa.. Witness to the era of transformations in Al Ain

The city of Al Ain is full of many historical sites and monuments that tell stories from the history of the UAE and the region, and reveal the features of social life in previous periods. Among these landmarks is the House of Mohammed bin Khalifa, which represents one of the cultural sites listed by UNESCO on the list of World Heritage Sites. In the city of Al Ain, during the last period, after the Department of Culture and Tourism - Abu Dhabi restored and rehabilitated it, to become a community center and a creative platform for visitors, citizens, residents and tourists.

The late Sheikh Mohammed bin Khalifa Al Nahyan had an influential and historical figure associated with important events in the history of the Emirate of Abu Dhabi, and the UAE in general, in addition to his pivotal active role in the Al Ain community.

In addition to the importance that it gained from the position of its owner in the society of the Emirates and Al Ain, the house of Mohammed bin Khalifa acquired additional importance to keep pace with the era of social and economic transformations in the history of the UAE, between the thirties and sixties of the last century, during the period that witnessed the first oil discoveries, which brought about social and cultural changes gradually in the country.

Therefore, the house became a symbol of that era, with its architectural connotations in which the originality of the design is mixed with the modernity of building materials and modern methods of implementation, and although the character and function of the house were different from the concept of housing in the castle and the traditional fort, it preserved the traditions of that time, in that it is Always open to all members of the community, it was a prominent landmark and a destination for the people of Al Ain.

On the other hand, the house, which is located in the heart of the heritage sites in Al Ain, included in the UNESCO World Heritage List, sheds light on the aesthetic and rarity of the lifestyle and architecture during the transitional period witnessed by the region, and despite it being a small period, it was pivotal in the history of Abu Dhabi, when traditional and modern hybrid architectural styles emerged as a result of the country's economic recovery after the oil discoveries in the fifties of the last century, to represent a valuable source for learning about the social, historical and architectural traditions witnessed by the UAE.

The House of Mohammed bin Khalifa includes several sections, the most prominent of which is the permanent exhibition that provides an overview of the history of the ancient house and the World Heritage sites in the Al Ain region, with a focus on the city of Al Ain during the transitional period. Also the changes in the surrounding city over the past 60 years.

The interactive experience "The Life and Era of Sheikh Mohammed bin Khalifa" presents an introduction to Sheikh Mohammed's life and biography, an overview of his daily life, interests and hobbies he practiced, such as gardening, managing palm plantations and falconry, in honor of him as a prominent figure from the Al Nahyan family, the ruling family in Abu Dhabi .

Visitors can also discover the architectural aspects of the house, and listen to different musical works, by famous artists at the time of the construction of the house, such as the Emirati poet Aousha Al Suwaidi, nicknamed "The Girl of the Arabs", and the Emirati singer Ali Bin Rogha and Umm Kulthum, as well as enjoying a set of stories that Narrated by the elderly residents of Al Ain, which revolve around their lives and businesses in the region over decades.

From 2007 to 2017, the House of Mohammed bin Khalifa witnessed a restoration process led by the Department of Culture and Tourism - Abu Dhabi, during which it was keen to preserve the main features of its architecture, as part of the department’s strategy to revive the past of Abu Dhabi and preserve the heritage of Emirati society, in order to ensure the preservation of traditions And the cultural heritage of the state and its transmission to future generations, and the house in its new look seeks to achieve a balance in preserving material and immaterial values, to resume its legacy as a vital center that welcomes all residents of the Al Ain region.

Visitors can discover the aesthetics of the house, and listen to musical works by famous artists at the time of its construction.

The teacher tells his story and his development, as well as the changes that occurred in the city around him.