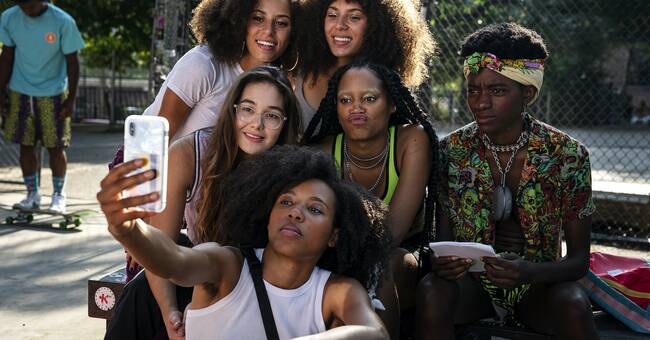 Based on the creator Crystal Moselle's film Skate Kitchen from 2018. A group of friends - all girls born after the turn of the millennium, break the boy dominance in New York's skate parks and disrupt traffic on the streets of the big city.

It lies, smokes on and drips from ramps.

The TV series L Word about lesbian dating in Los Angeles was groundbreaking when it came out in 2004. Now it's time for a new generation to get acquainted with the culturally declared drama.

The plot revolves around young people at a prestigious private school in Spain.

Most students come from a privileged background, live in grand houses and wear expensive jewelry and clothing, but not all.

Omar, who sells drugs, and Ander, who is a promising tennis talent, fall for each other.

Orange County in California is for millennials most associated with the drama series The OC from 2003. At a school in the same geographical area but in a new era, light years from the early 00's look at LGBTQI - the series Genera + ion takes place.

Teenagers' lives are not just about love.

They also relate to school shootings, climate crisis and conservatism.

Another millianial classic is Gossip Girl.

The TV adaptation of the upper class books on the Upper East Side of New York.

Now comes a new version, with new characters for a young, diversified and much more queer generation.

The upper strata of society are also of interest to the Swedish audience.

Young Royals is about how Prince Wilhelm against his will is placed at the boarding school Hillerska.

Simon is in the same class as Wilhelm.

But he does not live in the boarding school and does not come from a family with money.

Former Disney star Zendaya plays Rue who comes into the world while the Twin Towers collapse in New York.

The light and love of her life is Jules.

We are who we are

14-year-olds Fraser and Harper live with their parents on a US Army base in Italy.

It's about love, gender identity, anxiety and patriotism or lack thereof.

I am not okay with this

Sydney is no ordinary teenager.

In the middle of puberty, she also, against her will, develops superpowers.

In addition, she realizes she is in love with her best friend Dina.

Everything must be handled at the same time.

The series is about him, his family and his friends inside and outside school.

Like Casey and Izzie, who are friends, and maybe something more than that.

With little personal experience, but great theoretical knowledge in the subject, he begins to charge for consultations at the school where he goes.