"The better the days go by, it's completely beyond imagination"

[Revisit the sky to see the changes] "The better the days go by, it's completely beyond imagination"   China News Service, Shannan, August 4 (Zuo Yukun) "Life is really good now." Chen Mingying, a veteran of the Eighteenth Army, said in an interview.   The old man Chen Mingying was born in 1938 in Baiyu County, Ganzi Prefecture, Sichuan Province. When she was 13 years old, the Eighteenth Army of 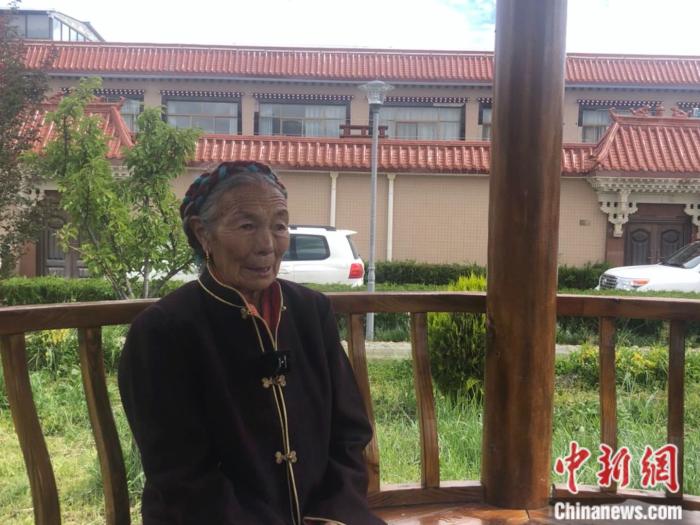 [Revisit the sky to see the changes] "The better the days go by, it's completely beyond imagination"

When she was 13 years old, the Eighteenth Army of the Chinese People's Liberation Army came to Baiyu County to prepare to enter Tibet. At a young age, she left her hometown to follow the Eighteenth Army and entered Tibet. Since then, she has devoted almost her entire life here.

Chen Mingying, an elderly old man, still remembers the scene when he saw the Eighteenth Army for the first time that year: "Everyone said that there was a very beautiful and very young army, well dressed, and very energetic."

You can learn to write and have food. Young Chen Mingying signed up to join the army and followed a unit of the Eighteenth Army into Tibet.

Starting from Qamdo, Chen Mingying followed the Eighteenth Army all the way through mountains and ridges, traversing virgin forests and swamp areas, and it took more than three months to reach Lhasa.

That was the first time Chen Mingying went out. She vividly remembered the scenes that year: "When we crossed the Jinsha River, we were on a cowhide boat. The yellow water was very deep and anxious, and it was very cold in the boat. I caught it. Tight, for fear that the boat will overturn the river."

At that time, because of his young age, Chen Mingying was organized to be responsible for the logistics work of the masses' ideological propaganda.

"We are with the masses every day. Three to seven people go to the masses' homes together during the day. In addition to propagating'the People's Liberation Army is good, the Communist Party is good,' we also help the masses with things such as chopping wood, carrying water, feeding cows, taking care of children, etc. As long as the people need things, we will do it. At night, we will set up our own tents, sleep in the tents, and sum up the work during the day."

Occasionally, everyone will have a gala together.

"You guys come to celebrate, let's celebrate." Chen Mingying still remembered the tune of the dance.

After arriving in Tibet, Chen Mingying worked at the People's Hospital of Lhasa for one year, and then went to the Central Institute for Nationalities to study cultural knowledge for five years.

After Tibet's democratic reforms in 1959, she came to work in Luozha County, Tibet, where she worked for nearly 30 years.

Now that Tibet has been peacefully liberated for 70 years, Chen Mingying has also returned to Zedang to provide for the elderly.

Chen Mingying's youngest granddaughter Renzeng Yangzong said that besides raising dogs, flowers and grass, the old man's favorite thing is to watch the news, and he was anxious to come back to watch the news and listen to the radio when he went out to play with his family.

She also repeatedly urged her children and grandchildren that the younger generation should do their jobs well, the lower-level people should be with the masses, and be patient and patient with the villagers.

After graduating from Rizeng Yangzong University, he returned to his hometown and became a professional staff of rural revitalization.

"After learning so much knowledge, I hope that I can return to my hometown, and be able to generate a passion, a passion, and a light. This is also the dream of all our Tibetan students."

"My two children are civil servants, and I hope they will always follow the party." The same person who has special feelings for the Eighteenth Army is the elderly Suolang Duoji from Nalong Village, Wumatang Township, Damxung County, Lhasa City, Tibet. He is the only witness and participant of the 18th People’s Liberation Army’s entry into Tibet in the village.

On August 22 and 28, 1951, the People's Liberation Army Eighteenth Army independent detachment of more than 1,100 people, divided into two echelons, set out from Qinghai and marched towards Tibet.

The troops crossed the Tongtian River, over the Tanggula Mountain, which is more than 5,200 meters above sea level, and passed by Nie Rong to Nagqu.

After resting for 10 days in Nagqu, Jing Dangxiong and other places entered Lhasa on December 1.

Suolang Duoji remembered that the People's Liberation Army came to his village in the ninth month of the Tibetan calendar in 1951, when Suolang Duoji was only 12 years old.

"It was snowing a lot at the time, their clothes were shabby, and their hands were rough and weak, as if they hadn't eaten for a long time."

But when people asked if they wanted to go back, they replied firmly, "In order to liberate Tibet, no matter how hard it is, we will not go back."

The young Suolang Duoji looked at them curiously, admiring their courage.

"At that time, I didn't know that they were the People's Liberation Army. I only knew that they were good people. It was a good thing." Suolang Duoji remembered that robbers and bandits were very rampant at that time, and they would take other people's yaks away and kill them during the day.

However, the People's Liberation Army is very disciplined and does not take anything from them.

The language was unsuccessful and there was no translation, so he said in sign language that he would use Dayang for goats.

The old man recalled that his father was seriously ill at the time and thought that he could not save him. It was a female army doctor from the Eighteenth Army who cured his father's illness for free under the heavy snowfall.

Recalling these details, Suolang Duoji folded his hands together.

Speaking of the changes in Tibet since the peaceful liberation of 70 years, the old man said that it was really impossible to say it all day and night.

Once working for slave owners, they had to pay a lot of taxes.

"After the People's Liberation Army came, it was not bad to hope that the robbers and thieves could be rectified. I didn't expect that the days passed the better, and it was completely beyond imagination."

For the elderly, his happiest thing is to be able to take care of himself and his family on his own.

After the democratic reforms, under the care of the party's policies, the old man not only turned over and became the owner, but also became an accountant in a shop and received his salary.

By participating in the construction of Qinghai-Tibet highway, railway and 109 national highway controlled projects, the income of the elderly family has been increasing. At present, the main source of income for the elderly family of eight is animal husbandry and gypsum ore transportation. Last year's income was 470,000 yuan, which went from unpaid taxes to a prosperous life. (Finish)