Africa press review - In the spotlight: MPs critical of the president arrested in Tunisia

In the headlines: MPs critical of the president arrested in Tunisia Audio 03:59 Soldiers guard the main entrance to the Tunisian Parliament, in front of which demonstrators gathered after the announcements of President Kaïs Saïed, Monday July 26, 2021, in Tunis. © AP / Hedi Azouz By: Christophe Paget Follow 11 mins Publicity First of all that of deputy Maher Zid, of the Islamist opposition p 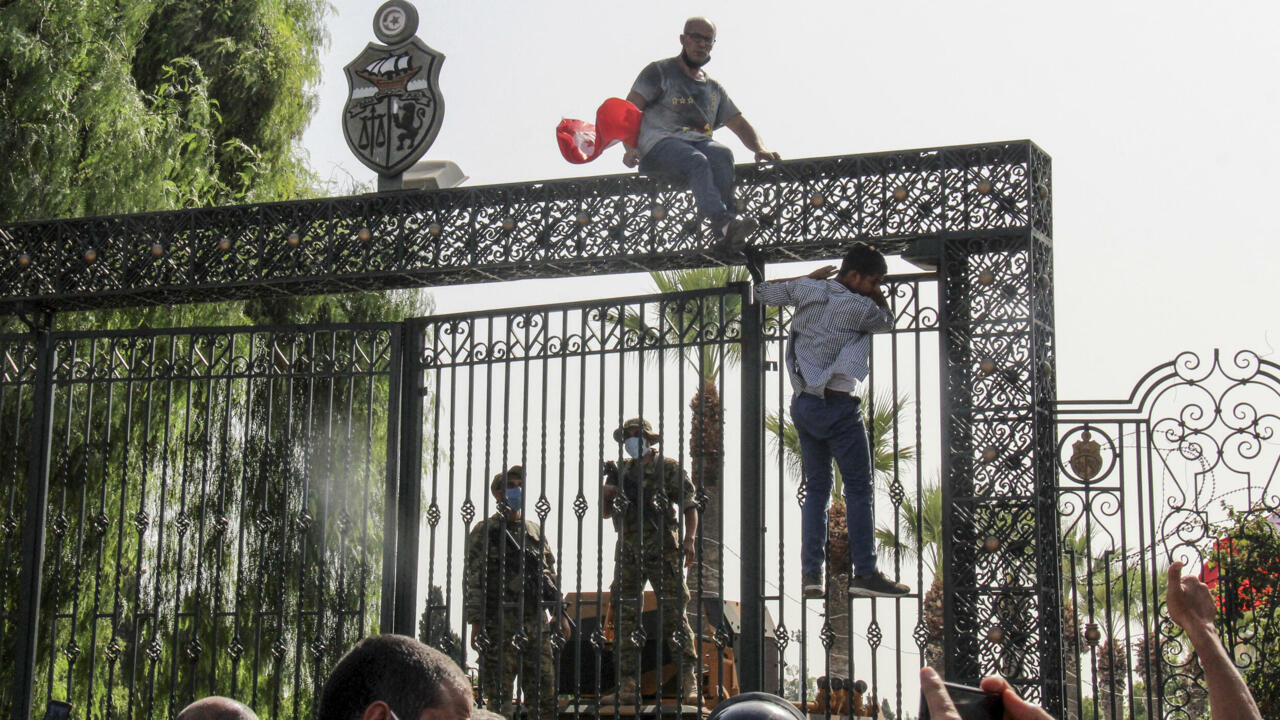 In the headlines: MPs critical of the president arrested in Tunisia

Soldiers guard the main entrance to the Tunisian Parliament, in front of which demonstrators gathered after the announcements of President Kaïs Saïed, Monday July 26, 2021, in Tunis.

First of all that of deputy Maher Zid, of the Islamist opposition party Al Karama, linked to the Ennahdha party, the main opponent of President Kaïs Saïed.

Kaïs Saïed who, as we recall, recently dismissed his Prime Minister, suspended the National Assembly and lifted the immunity of parliamentarians.

The deputy Maher Zid was therefore arrested on Saturday by the judicial police.

It is to be read on the Webdo site, "

without a warrant and without disclosing the object of his arrest,

From a police source, indicates the site, this arrest would in fact be in connection with "

the incident of the Tunis-Carthage Airport

It is to be read in Business News: Jack Sullivan, the national security adviser to President Biden "

(…) without forgetting the return of elected parliamentarians at the appropriate time

Reaction of the daily Tunisie Numérique: "

The columnist speaks of "

recommendations formulated as a superior indicates to a subordinate his instructions

", regretting that it was not Joe Biden himself who took his phone.

" of the deputies, he affirms that among them are "

tainted the elections which brought this Parliament

In the Middle East Eye, on the contrary, it is the legality of President Kaïs Saïed's action that the columnist criticizes, asserting that what he calls his "

Green light for the extradition of François Compaoré

The carrots are almost cooked for the 'little president'

" committed by the brother of former President Blaise Compaore "

since it was collared at the Paris airport de Roissy Charles de Gaule on October 29, 2017 on the basis of an international arrest warrant

”issued by the justice system of Burkina. François Compaoré, reminds

of being involved, failing to have given the order, in the atrocious assassination of the director of publication of the newspaper 'l'Indépendant'

And his three companions

And if justice and the Burkinabés

are wind up so that we hear the former economic adviser of Blaise Compaoré, it is that many have the impression that since December 13, 1998, he has always succeeded in evading this justice of men

So certainly, as said

the mallet of the Council of State in France sounded, shattering

his lawyers immediately seized the European Court of Human Rights. , who on Saturday "

ordered France to postpone this extradition until it decides.

A decision that can take years

if he is innocent as he and his lawyers claim, then why so much posturing and excitement every time his appearance before the judge is made possible?

You can read it in

. According to the director of the region's Emergency Response, the number of displaced people arriving in the camps is increasing every day, due to the fighting, and civilians who were in hiding when the fighting broke out are beginning to arrive. 76,000 displaced people have reportedly been identified over the past two weeks. French President Emmanuel Macron met on Saturday with the Prime Minister of Sudan, then with the Prime Minister of Ethiopia, indicates the French newspaper

And he considered that the humanitarian situation required, among other things, "

the lifting of all restrictions on the delivery of aid

". 90% of the population of Tigray live thanks to external aid, according to the UN.