"The last burst of heat": forecasters told about the weather in early August

Meteorologists believe that the beginning of the first week of August in the metropolitan area will be hot, but in a few days the average temperature will drop. According to them, at the end of this week in Moscow, the swimming season will finally close. Experts believe that the weather will generally be "normal, quite August." Meanwhile, in a number of other Russian regions, including Tatarstan, Krasnodar Territory and Rostov Region, a strong heat is expected in the coming days at the level of +37 ... + 38 ° С. 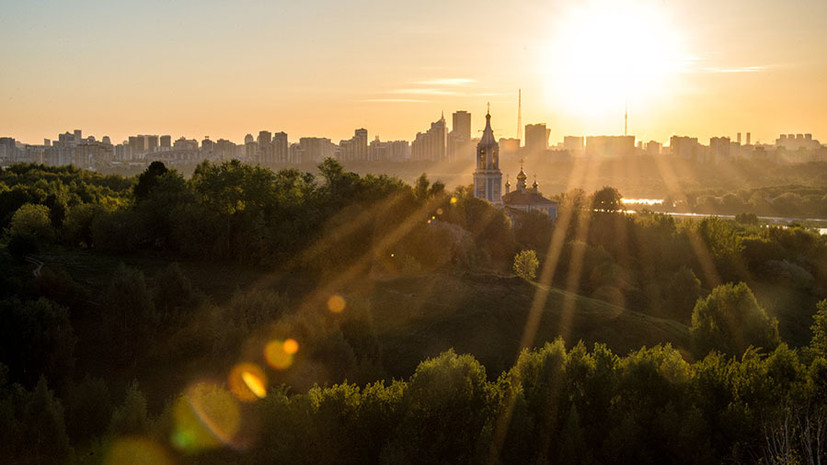 Hot weather in the metropolitan area will extend the swimming season for a week, after which it can be closed.

This opinion was expressed by the leading expert of the weather center "Phobos" Yevgeny Tishkovets.

The chief specialist of the Moscow meteorological office, Tatyana Pozdnyakova, in an interview with RT, said that it will be hot in the capital region at the beginning of this week, but then the weather will change.

But in the evening, a cold atmospheric front will approach the capital region, which will manifest itself in rains and, possibly, even thunderstorms.

Also on russian.rt.com, the meteorologist spoke about the deficit of precipitation in the capital region

Behind this cold front, she said, there will be another portion of "not too cold, but less warm air."

“That is, in principle, the temperature background will correspond to the climatic norm.

Only Thursday will be free of precipitation during the week.

On other days, light rains of varying intensity.

But heavy showers or thunderstorm activity are not expected this week, ”Pozdnyakova concluded.

Alexander Shuvalov, head of the Meteo forecast center, believes that the weather this week will be "normal, quite August" with moderate rains and temperatures within normal limits.

On the whole, the conditions are quite satisfactory.

But then we wait on Monday afternoon and closer to the night for the passage of the cold front of the cyclone, which in its bulk will attack St. Petersburg, "Shuvalov said in an interview with RT.

According to him, in the following days there will be a decrease of 5-6 degrees, as a result of which the daytime temperature will be +21 ... + 24 ° С during the rest of the week.

“It will rain almost daily.

Light and short-term, but still rain, ”he said.

The Ministry of Emergency Situations warns residents of the Central Federal District about rains with thunderstorms, increased winds up to 20 m / s and hot weather up to +36 ... + 38 ° С.

According to the warnings spread by the Ministry of Emergency Situations, the temperature of + 36 ° C on Monday is expected in the Kursk and Belgorod regions.

It will be hot on the territory of the Smolensk, Kaluga, Tver, Ryazan, Kostroma regions.

These regions will also experience heavy rains and thunderstorms with gusts of wind of 15-20 m / s.

In addition, short-term precipitation is predicted in the Bryansk, Tula and Oryol regions, hail is possible in some areas.

In a number of other Russian regions, severe heat is expected in the coming days.

In particular, this was reported by the Hydrometeorological Center of Tatarstan.

Also on russian.rt.com Forecasters warned about heat up to +38 ℃ in Kuban

On Tuesday 3rd August, some rain is possible.

According to preliminary information, on Wednesday, August 4, a cold atmospheric front will pass through the region.

Intermittent rain is possible in some places.

A thunderstorm and increased wind are also expected.

In the Krasnodar Territory, the air temperature can reach +38 ° C, said in the regional Hydrometeorological Center.

In the Rostov region, the temperature will continue to rise and by Monday, August 2, it will also reach +38 ° C.

Scientists believe that global warming is especially pronounced in Russia.

This, in particular, was said by the President of the Russian Academy of Sciences (RAS) Alexander Sergeev during the conference "Carbon neutrality - a new trend in the world economy."

“Russia is the“ kitchen ”of the world weather in this sense, because the increase in temperature on the territory of the Russian Federation is 1.5-2 ° C, and in the area of ​​our Arctic seas - 3 ° C.

That is, it is more than anywhere else on Earth.

If, say, nothing has changed in Antarctica, the average temperature has remained the same, then significant changes have taken place in the Arctic, ”Sergeeva TASS quoted as saying.

According to the scientist, "the Russian Federation is viewed as a country that should substantially study these processes and propose solutions."