After Wu Kris was arrested, what about his starring "The Journey of the Hairpin"? 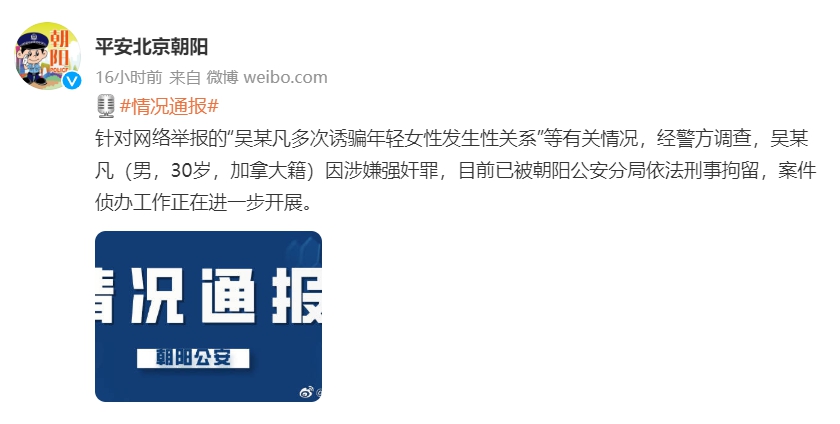 In addition to being caught, the follow-up chain reaction triggered by this incident is gradually emerging.

According to the police report, Wu Moufan (male, 30 years old, Canadian) has been criminally detained by Chaoyang Public Security Bureau in accordance with the law on suspicion of rape. The investigation of the case is being further carried out.

At the same time, the chain reaction has already begun, and its scope has greatly exceeded a certain industry.

As early as July, after Du Meizhu exposed that it had been infringed by Wu Yifan, several brands successively announced the termination of cooperation with Wu Yifan.

Brands such as Porsche, LV, and Bulgari have "drawn a clear line" with them.

Some brands that have worked with Wu Yifan are also eager to clarify.

The official WeChat account of King Glory commented and said: The brand contract relationship with Wu Yifan has ended in the first half of 2021, and the contract has not been renewed.

Not only that, Li Xueqin, who was previously popular with the phrase "Hello Wu Yifan, I am Li Xueqin", also unfollowed Wu Yifan on Weibo, and cleared relevant Weibo and group photos.

As an artist, Wu Yifan also has many works.

Where will these works go?

Among Wu Yifan's upcoming works, the one that has received the most attention is undoubtedly the big IP work "The Journey of the Hairpin".

The original work of the play is the online novel "Han Zhong Lu", and the leading actors and actresses are Wu Yifan and Yang Zi.

However, the reporter discovered on August 1 that the official Weibo of "Green Hairpin Xing" publicly revealed that there was only one Weibo left, and no two leading actors were involved.

Prior to this, many people in the industry speculated that many works and programs related to Wu Yifan, including "The Journey of the Hairpin", might not be broadcast as scheduled.

Some netizens also suggested that the show should be handled with the "AI-changing head" technology.

The reporter asked Tencent, the broadcasting platform of "Qing Zan Xing," on this matter, but had not received a reply as of press time.

In response, Xu Xiaodan, an entertainment law lawyer at Beijing Tianchi Juntai Law Firm, told the reporter of Chinanews.com that the drama party can claim compensation.

"Generally speaking, when the drama party signs a TV drama performance contract with the actors, they will sign'moral clauses', such as prohibiting the artist from taking drugs, prostitution, and illegal, criminal or immoral behaviors such as publishing politically sensitive speech, destroying other people’s families, drunk driving, fighting, etc. Otherwise, the right to terminate the contract will be exercised in accordance with the terms of the contract, and they will be required to bear the responsibility for breach of contract or compensation."

She said that with regard to civil compensation, if the court decides that the artist should be held criminally liable, and after the judgment comes into effect, each investor of the TV series that directly signed the contract with the artist and agreed on the relevant compensation clauses has the right to claim liquidated damages or compensation.

Artists need to use their own property to pay compensation, including payment of cash, the sale of movable property, real property, and the realization of intellectual property rights and other repayment methods.

Each investor can sue the artist, claiming that he shall bear civil liability for compensation as agreed in the contract. If the above-mentioned methods are exhausted and the compensation is still not enough, he shall be held accountable when his sentence becomes effective and he has the ability to recreate wealth.

In addition, the reporter noticed that Wang Jun, the legal adviser of the Actor Brokers Committee of the China Performance Industry Association, pointed out in an interview with the media in July that if the misconduct of the artist is true after fact investigation, the brokerage team who deliberately concealed key information and other methods to deal with the matter" May be suspected of further violations."

In recent years, the domestic punishment measures against inferior artists have gradually become rules to follow.

According to the regulations, artists who violate the practice norms will be boycotted by members of the association from a one-year period to a permanent period.

Observing discipline and law is the most basic requirement for a person.

But before becoming a star, please become a qualified person.

To be a man, we must have a moral bottom line, let alone test the legal red line.

As a public figure, celebrities must set a positive example for society.