As part of their ongoing partnership, the Environment Agency - Abu Dhabi, and the operational arm of the Emirates Nuclear Energy Corporation, the Nawah Energy Company, which is responsible for the operations and maintenance of the Barakah Peaceful Nuclear Energy Plants, launched a group of sea turtles in Abu Dhabi waters in the Al Dhafra region. 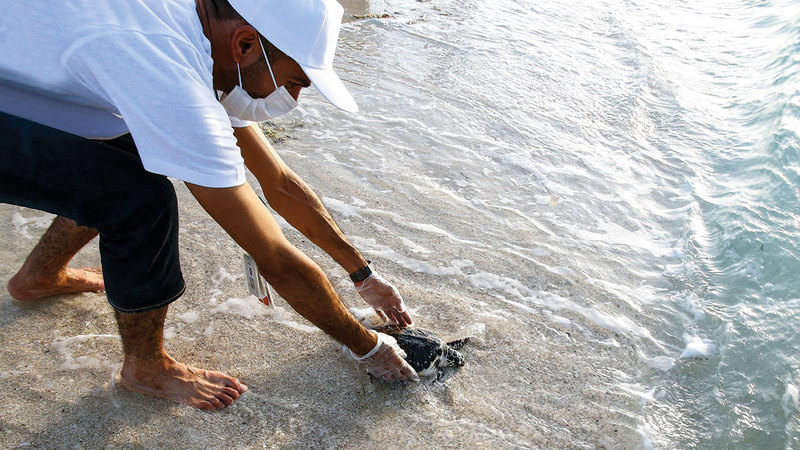 Launched by a team from the Environment Agency and Nawah Energy

As part of their ongoing partnership, the Environment Agency - Abu Dhabi and the operational arm of the Emirates Nuclear Energy Corporation, Nawah Energy Company, which is responsible for the operations and maintenance of the Barakah Peaceful Nuclear Energy Plants, released a group of sea turtles in Abu Dhabi waters in the Al Dhafra region, after completing their rehabilitation.

The turtles were rescued by a team of environmental volunteers from "Nawat", during their regular inspections on the beaches surrounding the Barakah power stations, where the injured turtles were rehabilitated, in partnership with "The National Aquarium" before 17 of them were re-released. In its natural marine environment, by a joint team from the authority and the company, where the CEO of Nawah Energy Company, Engineer Ali Al Hammadi, and the Acting Executive Director of the Terrestrial and Marine Biodiversity Department at the authority, Ahmed Al Hashemi, participated in the release of turtles during a special event. It is noteworthy that since June 2021, the Environment Agency - Abu Dhabi has participated in three sea turtle release programs, the first of which included the release of 150 sea turtles to their habitats after rehabilitation, and in the second a large group of turtles that were rescued previously in the Saadiyat Rotana, were released to celebrate On World Sea Turtle Day.The authority plans to release 150 turtles during the next phase, with tracking devices placed on some of them to monitor them via satellite, and identify their movement patterns, habits and migration paths. Abu Dhabi is home to 5,500 sea turtles, including green turtles, hawksbill turtles, and sometimes loggerhead turtles. . Given that the green and hawksbill turtles are the dominant species found in the waters of the emirate, these two species were monitored through a long-term research program established by the authority in 1999. The Environment Agency - Abu Dhabi also produced a documentary film that was filmed over a period of two years, entitled “Wildlife in Abu Dhabi.” Abu Dhabi: Al Dhafra Turtles", and highlights the pioneering efforts of its team specialized in studying turtles in the Arabian Gulf, which is the world's highest sea in temperature levels, also known as the Global Climate Change Laboratory.

• «The Authority» is preparing to release 150 turtles with tracking devices to monitor them.