Milos: Caves, catacombs, and the Goddess of Love 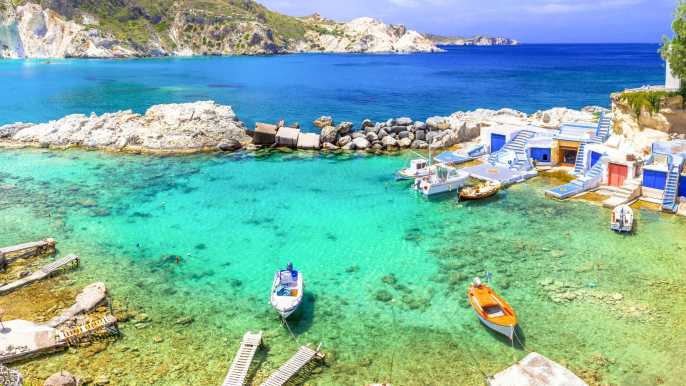 The volcanic Milos with special geomorphology, in the shape of a horseshoe, where the statue of Aphrodite was discovered, with more than 90 beaches, was for years a challenging destination. It is a beautiful and unique destination as well but don’t expect to find many activities and services available except for some small shops, tavernas, small hotels etc. If you are the kind of traveller who enjoys a lot of shopping, partying, or visiting casinos, you may need to consider another travel destination or for the casino you can visit online casino NetBet.

The island is the fifth largest at the southwestern tip of the Cyclades and the name Milos comes from "velos", which meant sheep.

On the day of our arrival on the island, by bus, we went to Sarakiniko. Vast lunar landscape, combined with all the shades of the blue sea. A small beach overlooked from above, with a few tamarisk trees for shade and some holes in the rocks.

Few guests enjoyed the bath, the sunbathing, lying on the rocks, and the shade under the tamarisk trees. We headed to the caves for better shade and as the entrance of one of them was occupied by other visitors we went a little further inside.

Wonderful coolness! Wonderful surprise! We found ourselves wandering in a wonderfully lit by nature at that time, quarry. The formations with the concentric squares that the light created with the galleries of the former mines, were an unexpected spectacle before our eyes! There we enjoyed the shade after the wonderful bath, among the lunar rocks, seeing the perched world on their elaborate formations. There we enjoyed the echo of our songs! Such a mood was created for us. Then we headed to the left of the beach, wherefrom the wonderful formation of an open lake and a natural bridge above the teenagers enjoyed the swims.

The next day, we started early in the morning, from the port of Adamas, with the big wooden boat, the best captain of Milos, as we were described. We enjoyed the serene, early awakening image of Adamas village.

We headed to Vani, Kalogries, Agathia, Triades Ammoudaraki, we saw the church in Agios Ioannis. We stopped in Sykia and approached near the arch of the cave, to admire the wonderful color of the water. We admired the bicolor rocks black and white (black, the lava of the volcano and white, the volcanic dust, as we were told in the tour).

We arrived at Kleftiko.

We were thrilled with the rock formations, the turquoise waters, the exploratory swimming with the few passengers of the boat, under the arch of one of the rocks, to reveal a shade of water in a combination, incredibly bright deep green. We passed by the beach of Gerontas, we saw the fishing houses in Sakola bay in the Garden.

We saw the wonderful beaches of Provatas and the lively Fyriplaka.

We were thrilled with the wooden staircase in Tsigrado and some daring ones hanging, trying to go down to the inaccessible creek with the white sand.

We stopped for a swim in the Gulf of Gerakas, at Kalamos beach, which can only be reached by boat. The formations on the steep mountain showed signs of rapid waterfalls to the sea that were imprinted on the rock and nothing grows there anymore. The sea was crystal clear and the beach shone with the components perlite, an insulating material, as they explained to us.

We passed Agia Kyriaki, Paliochori, and reached the sulfur mines where we saw old mining facilities of the geological wealth of the island.

At the bottom, where there was a light color of water, we were told that hot water was coming. We saw, engraved on a rock, the eye of Aphrodite watching us and a statuesque figure, standing haughtily in the water. We passed the beautiful beach of Kolimbisiona and headed to Kimolos.

Our boat, full of cheerful travelers, anchored in the port of Kimolos, north of Milos, which has the shape of a regular pentagon. There were a few tourist shops, cafes, and taverns. There in Psatha, on the clean beach with pebbles, we enjoyed another swim and rest under the tamarisk trees. It was a 20-minute drive to the town of Kimolos and we did not dare to go under the fire. We tried the Kimolon Laden pie, with flour, rich olive oil, cherry tomatoes, and onion. We learned about the beach of Prassa opposite Apollonia with the wonderful color of the waters and the also rich minerals Betonite, Iolite, Perlite that it has.

We boarded the boat and passing through Apollonia with the beautiful beaches along, the whitewashed churches we headed to Glaronissia.

The wonderful creation of nature with a volume of rock formed by hexagonal octagonal columns of rock. The captain, skillfully, approached the boat in an arch that could not pass through the rock and we touched the columns of rocks, while in the sky, the seagulls were flying.

Once again we saw Sarakiniko, with the divers of the white landscapes in the deep blue Aegean. Then we saw a desalination plant, many seagulls and cormorants, We swam diving from the boat to the beautiful beach of Firopotamos. We passed by the Bears, where today the shape of the rocks has changed and they look like a hare.

We photographed Klima, Syrmata, the wonderful fishing village with the two-story houses in a row dug in the volcanic ditches, next to the sea, where on the ground floor, they guarded the boats by pulling them with wires and on the upper floor, the fishermen lived.

We returned to Adamas excited.

We visited the Mining Museum of Milos, which exhibits the most important species of the mineral wealth of the island that are exported around the world: obsidian, kaolin, manganese, silicates, sulfur, barite, perlite, concrete, lead, gypsum, oil.

5-6 million years ago volcanic eruptions created the complex of islands: Milos, Antimilos, Kimolos, Polyaigos with valuable mineral wealth, which accumulates where hot water flows, between the geological layers and the cracks of the soil. From the stream of lava that is cooled, volcanic glass is produced, obsidian. Prehistoric islanders from this glassy mass made arrows for arrows and blades for interventions on vital human organs. Today, obsidian is still used for extremely accurate blades. Sulfur or sulfur is used in fertilizers, insecticides, gunpowder, rubber and is essential for amino acids and vitamins. Concrete is a cohesive material of sand, it replaces lime, a waterproofing material for construction works, it is abundant in Firopotamos. Perlite, in Tsigrado, volcanic glass rock, white plaster, is used as an insulating material or a means of filtering all kinds of liquids (drinks, medicines). Quartz, amethyst, iridescent pyrite, rocks, which make the island interesting for gold mining (reserves of billions of euros).