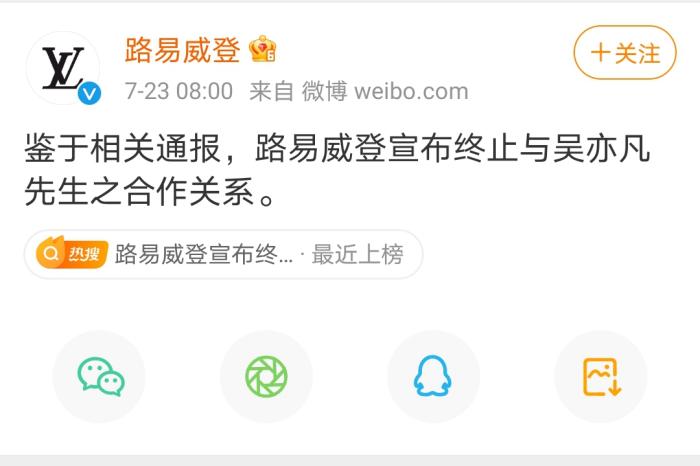 Louis Vuitton Weibo released a news: In view of the relevant notification, Louis Vuitton announced the termination of the cooperative relationship with Mr. Wu Yifan.

In the Weibo comment, some netizens left a message saying, "Please remember to keep your eyes open for the spokesperson in the future." Some netizens said that the termination of cooperation should not be "in view of relevant notifications". Even if there is no notification, you should cherish your brand image.

At the same time, this news also means that as the dispute between Wu Yifan and Du Meizhu continues to ferment, within a few days, Wu Yifan's existing endorsements have all been terminated.

Recently, the dispute between Wu Yifan and Du Meizhu has aroused continuous attention.

On the evening of the 22nd, the Chaoyang police in Beijing issued a report on the relevant situation, and the news quickly appeared on hot searches.

The report showed that the sexual relationship between the two parties was true, but there were other fraudsters behind the incident.

In response to the above-mentioned report, Chaoyang Police stated in an interview with the Beijing News that as of the public accusation against Wu Yifan by Du Meizhu, so far, it has not received Du Meizhu or other reports claiming to be the victim.

In addition, the police are still investigating the “Wu Yifan’s repeated tricks of deceiving young women into sexual relations” reported by netizens and recent online mutual exposures, and will be dealt with according to the results of the investigation.

The incident still has a follow-up, but it has already triggered a series of chain reactions.

Before the police issued a report, some corporate brands that had cooperated with Wu Yifan had announced that they had terminated their contracts and clarified their relationship.

After sorting out, it was found that on July 18, Wu Yifan's incident quickly fermented on the Internet. In the evening of the same day, several brands with keen sense of smell immediately announced the termination of cooperation with Wu Yifan.

For example, Han Shu immediately announced the termination of the cooperative relationship with Wu Yifan; Liangpin Shop said that the contract has expired; Yunting APP said that in addition to terminating all cooperation with Wu Yifan, all content recorded by Wu Yifan will be removed from the shelves.

The King of Glory silently deleted the endorsement information of Wu Yifan. The official WeChat account of King Glory said in a comment that: the brand contract relationship with Wu Yifan has ended in the first half of 2021, and the contract has not been renewed.

On the evening of July 19 and the early morning of the 20th, Wu Yifan ushered in greater losses. His three biggest endorsements: Porsche, LV, and Bulgari "draw the line" with them.

The matter did not end here.

On the afternoon of July 20, the official Weibo of "L'Oreal Men" announced: "L'Oreal Men has terminated all cooperation with Mr. Wu Yifan."

So far, according to media statistics at that time, within three days, the 15 brands endorsed by Wu Yifan have all been terminated except for LV's announcement of "suspending cooperation."

In this regard, Hu Keli, a lawyer of Beijing Yingke Law Firm, mentioned in an interview with a reporter from Chinanews.com that the brand party signs a contract with an artist and invites him to endorse products, generally taking into account the artist’s positive image and drainage ability, so the two parties signed The agreement will constrain the behavior of the artist, and the brand has rich experience in the method and business of the brand, and will often give the brand the right to unilaterally terminate the contract.

If the artist’s personal fault causes serious damage to his image, the brand’s contractual purpose cannot be achieved, and continued performance of the contract may result in heavy losses for the brand. The brand has the right to unilaterally terminate the contract in accordance with the contract.

According to the 2017 Forbes China Celebrity List, Wu Yifan’s annual income reached 150 million that year, ranking tenth on the list.

According to media reports, Ding Wei, an industry insider in the film and television industry, revealed that Wu’s single endorsement fee exceeds 10 million yuan, "most of which are around 15 million yuan per year, which has declined in recent years, and was higher in the past, with a price tag of more than 20 million yuan."

As for how much Wu Yifan will lose in this contract termination storm, there is still no conclusion.

In the view of legal persons, whether to pay or not depends on the terms of the contract.

The law-related details of the incident need to be verified by the judicial authorities.

However, entertainers must always keep in mind that they should strictly abide by the law and social ethics and stand upright.

The entertainment industry is not a place outside the law, no matter how deep the water is, the balance of the law will eventually clarify it.