Chinanews client, Beijing, July 21. At present, it has been 24 hours since Zhengzhou City launched a flood control level I emergency response on the 20th. Rescue in Zhengzhou is still in progress, and various parties are rushing to help, and the water grid is gradually recovering. July 21, 2021, the second day of heavy rain in Zhengzhou, Henan. Image source: ICphoto What is the impact of the d 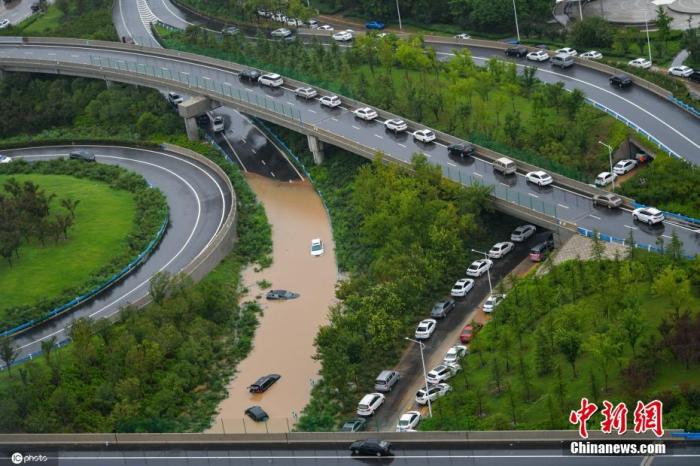 Chinanews client, Beijing, July 21. At present, it has been 24 hours since Zhengzhou City launched a flood control level I emergency response on the 20th.

Rescue in Zhengzhou is still in progress, and various parties are rushing to help, and the water grid is gradually recovering.

What is the impact of the disaster?

According to the official Weibo of the Henan Provincial Government website on the afternoon of the 21st, according to incomplete statistics, since the 16th, this round of heavy rainfall has caused 1,240,737 people in 89 counties (cities, districts) and 560 towns in the province to be affected. 25 7 people died and lost contact.

In Zhengzhou City, affected by the continuous heavy rains, all stations of the Zhengzhou Metro network have suspended operations on the evening of the 20th, and urban ground transportation has also been affected.

In addition, according to the official Weibo news of the Road Network Monitoring and Emergency Response Center of the Ministry of Transport, as of 16:00 on the 21st, 30 sections of 25 expressways in Henan were closed due to heavy rainfall. The recovery time is to be determined. No vehicles and personnel have been reported. Detention situation.

According to the news from the National Railway Group, in response to the impact of the heavy rain in Henan Province on the order of railway transportation, the railway department has taken various measures to restore the order of transportation.

In addition, the railway department uses a variety of methods to find out the location of stranded passenger trains, grasp the situation of passengers on the train, organize railway units and cadres and employees along the line to overcome various difficulties such as poor surrounding roads and close supermarkets, and do everything possible to replenish food, drinking water and other materials. To ensure the supply of meals, qualified stations will organize stranded train passengers to eat in batches, and organize buses for passengers who are willing to get off the train to the nearest urban area.

At present, the stranded passenger cars have been continuously supplied with food.

——More than 30,000 express shipments were damaged to varying degrees

According to information from the State Post Bureau, as of 9 o'clock on the 21st, no casualties in the express delivery industry in Henan Province had occurred; 9 people were transferred to a safe location with the assistance of firefighters; 13 express mail processing sites were flooded and unable to operate; 91 express delivery vehicles Damaged; about 33920 express shipments were damaged to varying degrees.

At 5:30 on the 21st, the Handan City Fire Rescue Detachment assembled in the rain.

How is the rescue progress?

In addition, in accordance with the relevant provisions of the "Henan Provincial Flood Control Emergency Plan", the Henan Provincial Anti-Fighting Guidance Committee decided to upgrade the flood control emergency response level from Level II to Level I at 3 am on July 21.

After the disaster, more than 3,200 troops, armed police officers, and militiamen from Henan were dispatched in the Central Theater to conduct emergency rescue and disaster relief in 10 regions.

The State Grid disclosed on the 21st that on the 20th, many parts of Henan Province, especially Zhengzhou City, experienced major floods. The heavy rain weather brought severe challenges to the operation of the province's power grids, equipment safety, and power supply.

As of the morning of the 21st, one 500-kilowatt, one 250-kilowatt, and one 200-kilowatt generator vehicle has been put in place to carry out power protection work.

On July 21, the stagnant water in the Zhengshui section of Zhengzhou, Henan Province dropped significantly, but there were still many serious spots on the streets.

——Repair more than 6000 base stations

When a disaster strikes, smooth communication is of the utmost importance.

The Ministry of Industry and Information Technology of China stated on the 21st that it has launched an emergency response plan and organized basic telecommunications companies to carry out emergency communications support overnight.

As of 10:00 on July 21, the communications industry has overcome the impact of unfavorable factors such as roads and city power interruptions, repairing 6,300 base stations and 170 optical cables totaling 275 kilometers, and the communications emergency repair and restoration work is still in progress.

On the 21st, the Ministry of Finance issued an emergency relief subsidy of 100 million yuan to support Henan Province in flood prevention and disaster relief work.

The Henan Red Cross Society launched a first-level emergency response to natural disasters in response to floods. It dispatched 7 rescue teams including Red Cross water rescue and search and rescue teams to the disaster area immediately to carry out rescue work such as search and rescue, transfer and resettlement of the victims, and urgently allocated funds to the disaster area. Emergency relief funds are used to purchase urgently needed materials.

In the early morning of July 21, a fast food restaurant in a shopping mall in downtown Zhengzhou opened to the public for free.

According to the WeChat official account of the Zhengzhou Municipal Market Supervision Administration, the Zhengzhou Municipal Market Supervision Bureau requires that major supermarkets and convenience stores first publicize the location of their open stores and increase the supply of various daily necessities; second, publicly promise to fulfill their social obligations , To ensure that the price is not increased, and the supply is guaranteed; the third is to maintain a good transaction order, and it is strictly forbidden to hoard, drive up prices, sell substandard goods, and other illegal acts that disrupt the market order during the flood control period.

The Henan Banking and Insurance Regulatory Bureau has issued an emergency notice, requiring the main persons in charge of all units to take the lead in person on duty, take the lead and command, earnestly play the role of the backbone, quickly organize forces for flood prevention and disaster relief, and strictly prevent secondary disasters.

When will the rain stop?

The rainfall in Henan has not stopped for the time being.

The Henan Meteorological Observatory continued to issue a red rainstorm warning at 18:40 on the 21st: Hebi, Jiaozuo, Luohe and Anyang, Zhumadian, Xinyang and parts of the western and Pingdingshan areas of the three regions, the precipitation has reached more than 50 mm, it is expected in the next 3 hours , The precipitation in the above-mentioned areas and the Xuchang area, the western part of the Xinxiang area and the northern part of the Zhengzhou area continues, and the accumulated precipitation will reach more than 100 mm.

The Meteorological Department predicts that from 20: 00 on the 21st to 20: 00 on the 22nd, there will be torrential rains to heavy rains in parts of central and northern Henan, southern Hebei, eastern Shanxi, southeastern Guangxi, southern Leizhou Peninsula, northwestern Hainan Island, and northern Taiwan Island. Among them, there were extremely heavy rainstorms (250-280 mm) in the northwest of Henan and southwest of Hebei.

The Ministry of Water Resources and the China Meteorological Administration jointly issued a meteorological warning for red flash flood disasters at 18:00 on the 21st: It is estimated that mountain torrent disasters are likely to occur in parts of southwestern Hebei, southeast Shanxi, and northern Henan from 20:00 on the 21st to 20:00 on the 22nd. (Orange warning), the possibility of local flash flood disasters is very high (red warning).

All localities are requested to pay attention to real-time monitoring, flood prevention early warning, and diversion and avoidance work.