Jeff Bezos makes his dream come true: "We are going to build a highway into space"

With cowboy hat and boots and futuristic spacesuit, as are all spacesuits. This is how the richest man on the planet dressed yesterday to make his great ... 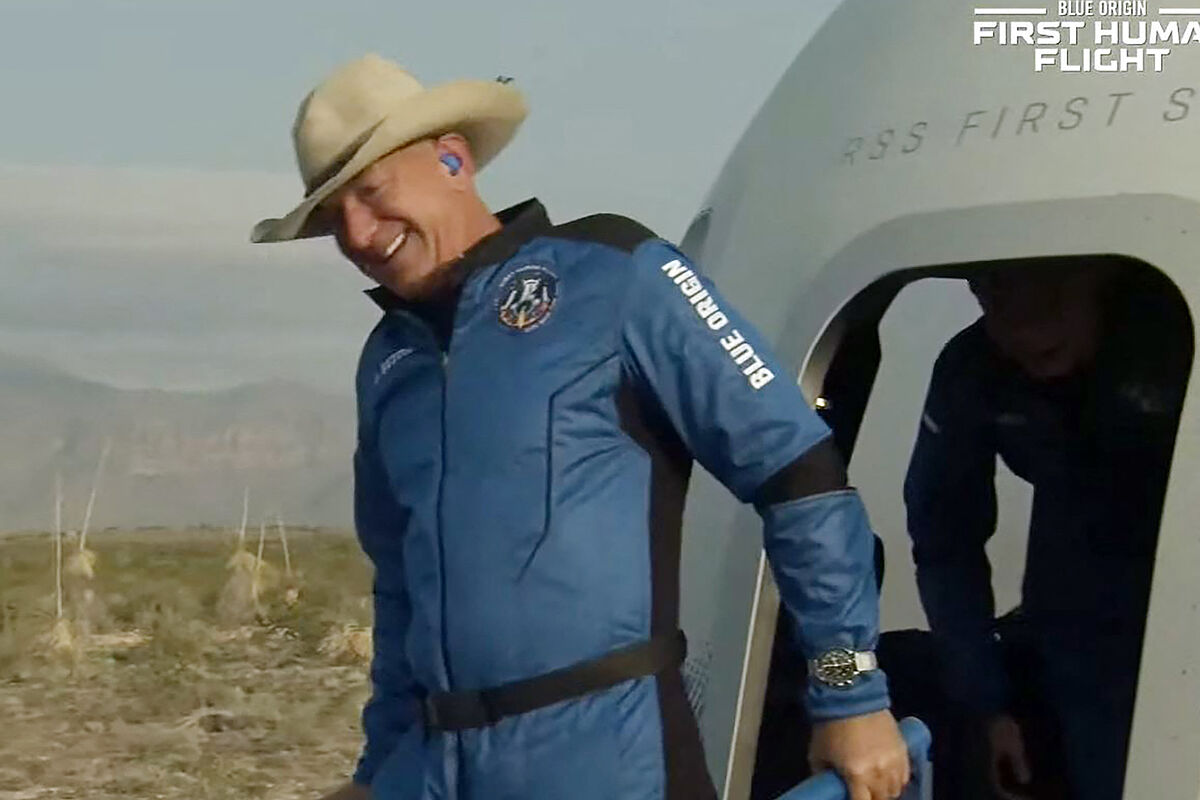 With cowboy hat and boots and futuristic spacesuit, as are all spacesuits. This is how

the richest man on the planet

to make his great dream come true from

, the state where he spent his summers during his childhood and where yesterday he took one of the most symbolic and important steps of his ambitious space program with which He plans to get to the moon at the very least.

, got on his own spaceship

, experienced weightlessness, achieved the "astronaut wings" and, above all, he had a great time. It was short but intense. "It was the best day of my life," summed up the tycoon when he landed, who claimed to have been impressed by the "fragility" and "beauty" of our planet.

He was accompanied on his adventure by three carefully sectioned people:

, who was not allowed to become an astronaut as a young woman because she is a woman and at 82 years old is the longest-lived person to go to space, and the

, officially the youngest astronaut: « We were the first and hopefully many more people can do it, ”said Daemen, whose family paid an undisclosed amount for the ticket and is therefore the

first tourist to pay for a suborbital flight

Funk, also very excited and in top form, thanked Bezos for the opportunity -he traveled as a guest-, assured that he wanted to repeat soon and acknowledged that he would have liked the flight to be longer.

From the Blue Origin company they highlighted another milestone of this mission: it is the

first time that two brothers travel together into space

Visibly happy, relaxed and excited and without removing his Texan hat at any time,

Jeff Bezos was very talkative and joking throughout the press conference

, in which he gave symbolic gifts to his mother and brother and ended up distributing

Thus, the billionaire announced a new philanthropy award that he has called Courage Civility because it is aimed at civilians who stand out for their contributions to society. The Spanish chef and philanthropist

and the environmental and human rights activist

were the first two winners. Each of them will receive no less than $ 100 million that, according to Bezos, they can allocate to their own organizations or donate to other charities of their choice. "Now is the time to think big," said the Asturian José Andrés, who won the Princess of Asturias Award for Concord a few weeks ago and who during the pandemic has extended his network of social dining rooms to assist people needy.

Bezos, a strong advocate for the long term, said yesterday that

"What we have done is not just an adventure, we have taken the first step of something great ... of something important ... we are going to build a highway to space for our children and their children," said the tycoon, who recalled that "Earth is the only good planet in the Solar System, I promise you that it is so and we have to take care of it." "It is not about escaping the Earth but about protecting it," he stressed.

According to Bezos, this year they will make two more flights with their

, which will be followed by many more in the coming years to gain experience.

Engineer Bezos was satisfied and defended the technology they are using in their space program, which he defined as "practical" and will allow them a progressive transition to other larger vehicles with which they will go further: the

will be succeeded by the

, already underway, and later the

All the rockets honor pioneers of NASA, which yesterday celebrated the 52nd anniversary of Apollo 11.

By the way, they were invited to the launch in recognition of the first American to go into space, in 1961.

As planned, Bezos has gone further than his rival, Richard Branson, owner of Virgin Galactic, who congratulated the Blue Origin team through Twitter: "It was impressive," said the British millionaire, who on July 11 reached the 85 km altitude with his Unity spacecraft on a suborbital test flight of his company.

Space tourism has taken off this summer.

Creators Jeff Bezos: 7 Fascinating Anecdotes About The Founder Of Amazon