Fahd Al-Mas: “Khalk Shanab 2” is a change in my life

Emirati artist Fahd Al-Mas considered that his participation in the movie "Khalk Shanab 2" represents a qualitative leap in his life, expressing his happiness at the return of Emirati cinematographic works to theaters again. Al-Mas told "Emirates Today" that the new film, which is expected to be shown After Eid al-Adha, it will be 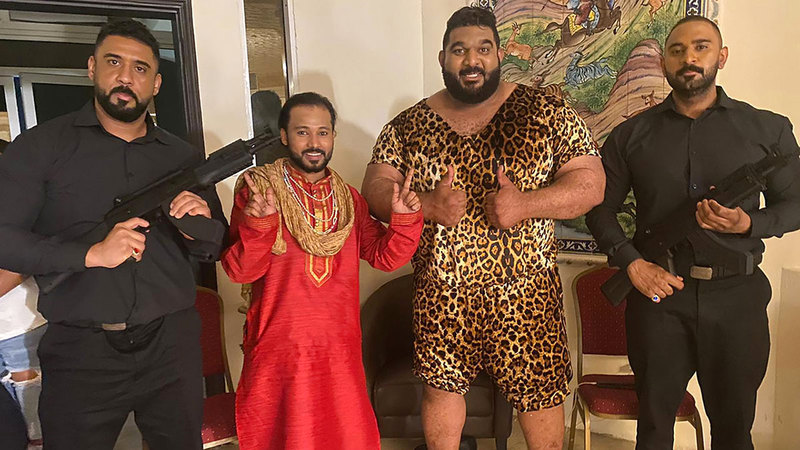 Happy with his first cinematic experience

Fahd Al-Mas: “Khalk Shanab 2” is a change in my life

Emirati artist Fahd Al-Mas considered that his participation in the movie "Khalk Shanab 2" represents a qualitative leap in his life, expressing his happiness at the return of Emirati cinematography to theaters again.

Al-Mas told "Emirates Today" that the new film, which is expected to be shown after Eid al-Adha, is distinguished by the fact that it brings together distinguished artists from different countries, such as Bahrain, Egypt, Yemen, China, Pakistan, India, Iran, Malaysia, Syria, Iraq, Morocco, Algeria and the Philippines, in addition to the suspense it contains. And adventures revolve in the form of a comedy in the streets and forests of Malaysia.

Al-Mas expressed his happiness at joining "Khalk Shanab 2", after the great success of the first part of the film, which achieved high viewing rates when it was shown in cinemas, and also topped the views when it was shown on the global network "Netflix", pointing to what distinguished it. Behind the scenes of filming the work, led by Emirati director Hani Al Shaibani, from a family atmosphere, and the mutual support of all the work team.

And about his role in the film;

He pointed out that he plays a complex role in which he combines evil and comedy, as he plays the character of a businessman who seeks to make a big deal, pointing out that the film is characterized by its youthful atmosphere, and it deals with topics from the reality in which we live.

He added: "Although the film represents my first cinematic experience, my previous experiences of standing on stage benefited me during work and I did not feel any difficulty during filming, in addition to the work environment and the great support provided by the work team to us made the experience enjoyable, and I hope it will be repeated in The future, as I hope to meet the expectations of the audience,” noting that his focus in the past period was on the stage, and he presented a number of plays for adults and children, including “Smurfs of the Forest”, “Magic Lantern” and “Layla and The Deeb”, and he also participated in the championship Gulf Cup to provide a representative video of the Bahraini national team.

Regarding the impact of the Corona pandemic on the art scene, Al-Mas indicated that its impact extended to all parts of the world, whether in filming new works or closing theaters and stopping art festivals, and in the Emirates it came during a period that was witnessing an active movement and filming of many cinematic and dramatic works, which led To the cessation of filming many of these works, while other works continued filming under strict precautionary measures, pointing out that the speed of the UAE’s response to dealing with the pandemic, and the precautionary measures and measures it took, contributed to the gradual, safe and rapid return of life compared to many countries.

He expressed his optimism about 2022, and to witness the end of the epidemic, explaining that he has technical projects outside the country that he is scheduled to participate in, but he is waiting for the pandemic to end so that he can travel and participate in it.

The first part of it was shown in the summer of 2019, and it achieved great success in theaters, as it was shown on the network "Netflix".