Imagine that you pay 23 million euros for a plan that you really want or that is even one of the great illusions of your life, but you cannot do it due to a problem of ... 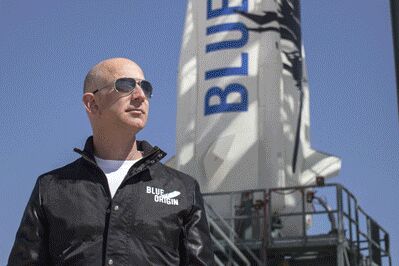 Imagine that you pay 23 million euros for a plan that you really want or that is even one of the great illusions of your life, but you cannot do it due to a scheduling problem. Well, that is what apparently has happened to the mysterious millionaire who paid that amount during an auction in exchange for one of the four tickets for a flight in Jeff Bezos' spaceship on July 20. It is not just any trip: the American billionaire and his brother, Mark Bezos, will also go on the ship in what will be the first flight with astronauts of their vehicle, the New Shepard.

Instead of the mysterious passenger who has asked that his name remain anonymous, there will be an 18-year-old Dutchman named Oliver Daemen, the son of a billionaire who has also paid a considerable sum for his son's ticket, but which he assured In a statement from the family, it is a figure much lower than the 23 million euros paid by the winner of the auction.

The Daemen bid for the ticket at the auction on June 12, but when it went through the roof they decided to stop.

A few days ago, they received a surprise call from a representative of Blue Origin, Bezos's aerospace company, to inform them that their son could go on this pioneering flight.

The mysterious bidder who paid 23 million euros for his share will be relocated on another space flight.

Bezos' flight will arrive just nine days after another billionaire, Richard Branson, participated in one of the last tests of his ship before offering the public his suborbital tourist trips (passengers reach an altitude of 80-90 kilometers). and enjoy four or five minutes of weightlessness).

Branson has been ahead of Bezos but the Amazon owner can boast of being a pioneer in other respects.

For starters, its heterogeneous crew will bring

the youngest astronaut in history, Oliver Daemen, and the oldest

Funk is one of the women who were part of the Mercury 13 program, in the 60s, a group of women who successfully passed all the tests required to be astronauts but who NASA did not give the opportunity to fly into space for be women.

Bezos, 57, wanted to redress this discrimination they suffered and invite Funk to get on his ship to finally become an astronaut.

He has also invited his brother Mark Bezos, 53, who works in an NGO in New York and is a volunteer firefighter.

As for young Oliver Daemen, we know that he finished high school in 2020 and is enjoying a gap year.

He has a private pilot's license and according to his family, from the age of four he has been passionate about space and rockets.

In fact, the young man will begin his studies in physics and innovation management at the

allow Daemen to fulfill a life dream, fascinated by space, the Moon and rockets since he was four years old, reports AFP.

The young man plans to attend the

"This marks the beginning of the business operations of [the ship]

and Oliver represents a new generation of people who will help us build a path into space," said

, CEO of the company.

Exploration Picked Up Among the Richest Men on the Planet for Space Tourism: Where Does Space Really Begin?

Interview Aitor Sánchez, nutritionist: "Eating sustainable food does not have to be expensive"