One, two, three, and four on June 4. These are the times that Doña Letizia has worn this model in an official act, in blue with black butterfly embroidery, one of her 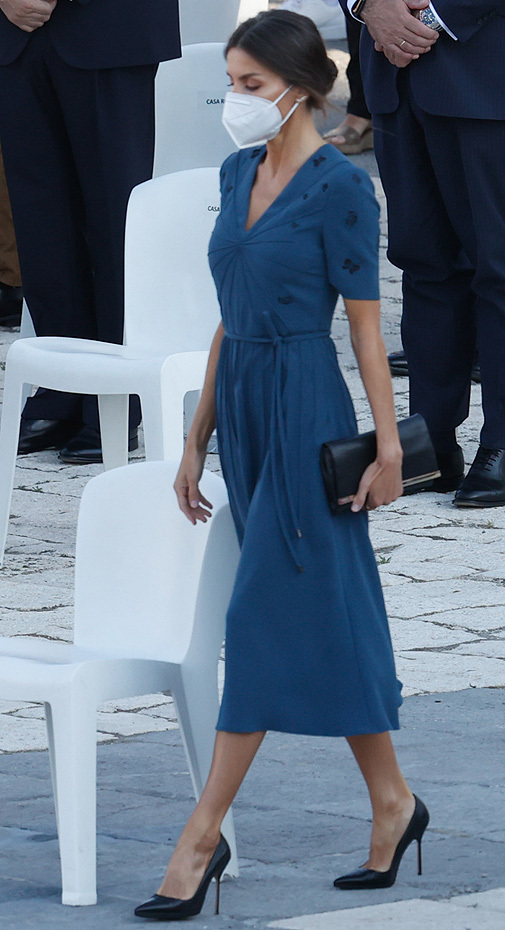 These are the times that Doña Letizia has worn this model in an official event, in blue with black butterfly embroidery, one of her most praised looks here and abroad.

skirt, short sleeves, a V-neckline, a very fine belt in the same fabric and

that fan out from the center of the chest to the sides, and also from the waist down.

Like today, whenever she has worn it, she has combined it with

black stilettos and a clutch of the same color.

This time she has styled herself with a bun, something that we always applaud, as it looks much better than her hair, now too long and with a visible lock of gray.

Detail of the look of Doña Letizia.

In this way, the Queen continues her austerity policy that began with the pandemic and that, with some exceptions, she maintains to the letter both for herself and for her daughters, the Princess of Asturias and the Infanta Sofía.

The pieces she has released since then are counted, but she can afford it thanks to her well-stocked wardrobe and her art to, by changing the accessories, make her looks from other seasons seem new.

Fashion Queen Letizia returns to nail her model, along with a Begoña Villacís on the beach?

Fashion: Win the exotic touch of Queen Letizia against the basic looks of Batet and Díaz Ayuso

Fashion Queen Letizia knows that her silhouette is her great asset, and insists on clothes that define her