Egypt, Jordan and Iraq meet in tripartite summit in Baghdad

Egypt, Jordan and Iraq affirmed their willingness to strengthen their cooperation in the face of regional challenges on Sunday in Baghdad. This tripartite summit marked the first visit of a Head of State ... 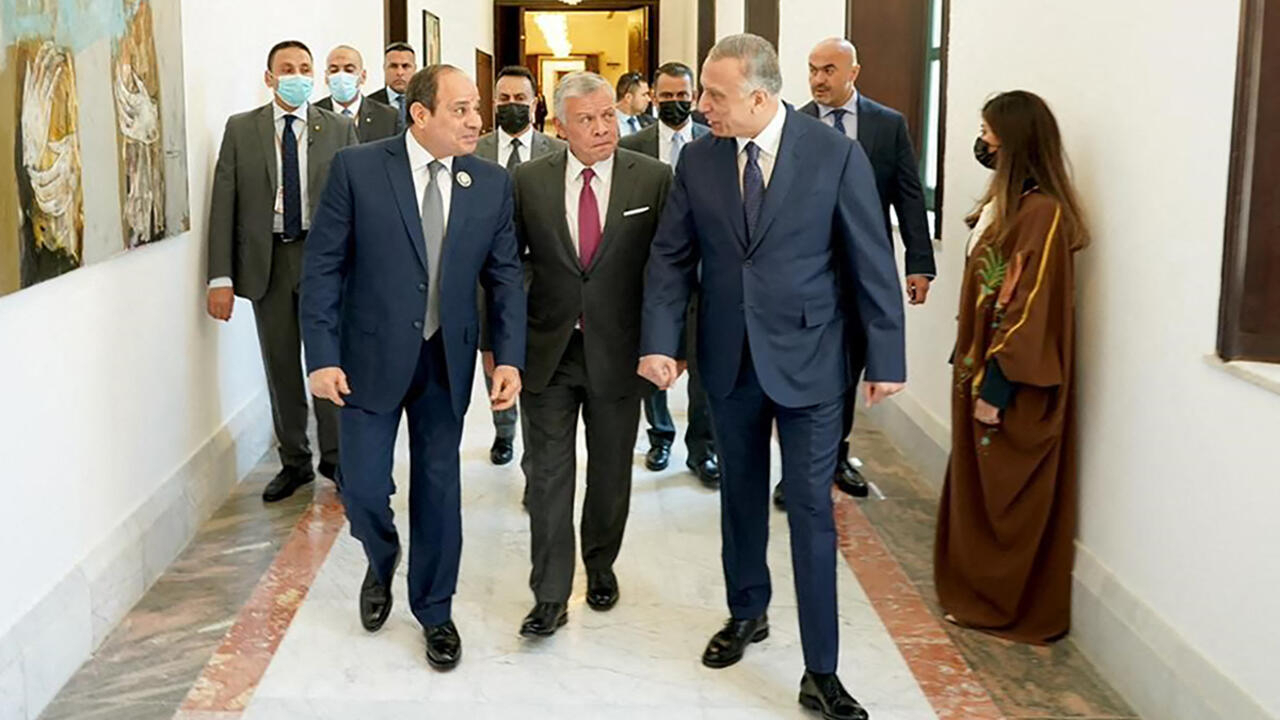 Meeting at a tripartite summit on Sunday, June 27, in Baghdad, Egypt, Jordan and Iraq agreed to strengthen their security and economic cooperation.

Abdullah II of Jordan visited the Iraqi capital in early 2019 for the first time in 10 years, while Abdel Fattah al-Sisi is the first Egyptian president to visit Iraq since the invasion of Kuwait by troops from the former dictator Saddam Hussein, in 1990. Diplomatic relations between Baghdad and Cairo, however, have continued to improve in recent years.

On Sunday, King Abdullah II and Abdel Fattah al-Sisi were received by Iraqi President Barham Saleh and Prime Minister Moustafa al-Kazimi. This meeting constitutes "an eloquent message in the face of the enormous regional challenges. Iraq's recovery paves the way for an integrated system for our region based on the fight against extremism, respect for sovereignty and economic partnership", he added. Barham Saleh tweeted.

On the agenda: regional issues as well as ways to strengthen cooperation between Iraq, Jordan and Egypt in the areas of security, energy and trade, according to a joint statement released to the outcome of the meeting.

The leaders also discussed a "political solution" to the war in Syria under United Nations resolutions "which will preserve the security and stability (of the country) and provide adequate conditions for the return of the refugees".

Baghdad as a regional mediator?

The war in Syria has claimed nearly 500,000 lives, according to an NGO, and displaced millions of people, some flocking to the borders of Jordan, which lacks resources and faces economic difficulties. The leaders also praised the ongoing efforts to restore stability in warring Yemen while in Libya, they called for the departure of foreign forces and mercenaries.

Iraq is strongly committed to a rapprochement with the United States' Arab allies in the Middle East, Saudi Arabia, Egypt and Jordan, and also actively supports the reintegration of Syria into the Arab League.

Baghdad seeks to make itself indispensable as a regional mediator to avoid being reduced to a field of clashes between the two great regional rivals Iran and Saudi Arabia, according to analysts.

Sunday's summit was "a message" to the United States that Iraq maintains relations with Iran but not at the expense of Arab countries, said Iraqi analyst Ihsan al-Shamari.

Iran and Saudi Arabia severed diplomatic ties more than five years ago, driving a fault line in the Middle East.

Riyadh and Tehran support opposing sides in the region's main conflicts, including Yemen, Syria and Iraq.

They also oppose Lebanon and Bahrain.

"This visit is an important step towards strengthening regional economic and security ties between Egypt, Iraq and Jordan to move towards regional stability," State Department spokesman Ned Price said. .