Xinyang BEIJING, June 18 electricity problem: the old revolutionary base County: "struggle of red and green," in towards the revitalization   Author Kan Li Wang Haibo Huang Yuhan Li Chaoqing   Located in the hinterland of the Dabie Mountains, Xinxian County of Henan is known as the "Red Capital, Hometown of Generals, and Jiangnan with Poems and Paintings".   "Every family has the Red Army, ea 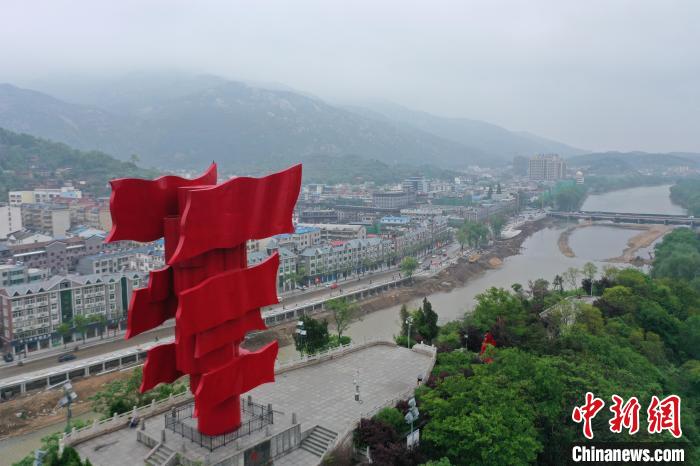 problem: the old revolutionary base County: "struggle of red and green," in towards the revitalization

Located in the hinterland of the Dabie Mountains, Xinxian County of Henan is known as the "Red Capital, Hometown of Generals, and Jiangnan with Poems and Paintings".

"Every family has the Red Army, each household has martyrs, the mountains are buried with loyal bones, and the mountains have monuments."

In this red hot land, more than 40 generals from the new county were raised successively, and more than half of them were sacrificed in the new county with a population of less than 100,000 during the Revolutionary War.

On the 18th, "Reading the original mission here-a trip to the old district of the Internet media revolution" network theme activity·Henan Station interview team walked into the new county of the old revolutionary district of Dabie Mountain to explore this red fertile soil that is heading for revitalization.

The picture shows the aerial photography of the "Red Flag Fluttering" theme sculpture on Hero Mountain, the red landmark of Xinxian County.

"Red Land" has many red stories

In 1926, revolutionary martyr Wu Huanxian joined 7 activists and intellectual youths in the peasant movement in the Jianchanghe area of ​​Xinxian County to establish the first party group.

In February of the following year, the party group absorbed a group of advanced elements and established the first rural party branch in the central area of ​​the border between Hubei and Henan. Wu Huan was the first branch secretary.

In the county seat of Xinxian County, the Capital Revolution Museum and the Revolutionary Martyrs Cemetery are across the river. The statue of "Red Flag Fluttering" on the lush Hero Mountain next to it tells countless visitors that this is a red land.

Entering the museum, the "Lenin" aircraft, the skimming used by the Red Twenty-Five Army, the copper kettle used by the martyr Liu Mingbang... more than a thousand red cultural relics tell people the "Dabie Mountain Spirit".

Among them, the "draft of land decrees" on an old wall attracts particular attention, which is a historical testimony to the land revolution in the Hubei, Henan and Anhui revolutionary base areas.

Instructor Han Lan introduced that in the war years, farmers used mud and straw to cover this wall with "Law of Land" many times before it was preserved.

Today, this wall has become a national first-class cultural relic, and it is the "treasure of the town hall" of the Revolutionary Museum in the capital of the Hubei, Henan, Anhui and Soviet regions.

In fact, the Capital Revolution Museum of the Hubei, Henan, Anhui and Soviet Areas is only a microcosm of the red tourism in Xinxian County.

In recent years, the "red land" of Xinxian County has become popular. As red tourism has become popular, these resource endowments have become prominent and they have begun to feed back the masses of the old revolutionary base.

Han Lan said, “If there are more tourists, the economy of the old district will improve.”

The land in Xinxian County is red, but the environment here is green.

This mountainous county dominated by forestry is described as "seven mountains, one river, one field, and one road and manor."

Xinxian County straddles the transitional zone of north-south plants and is rich in animal and plant resources. There are 2,389 species of plants and 1,296 species of animals, many of which are national-level rare species.

The county's vegetation coverage rate is 93%, forest coverage rate is 71.2%, and the air contains more than 14,000 negative oxygen ions per cubic meter, which is known as the "natural oxygen bar".

Among them, the local Camellia oleifera forest covers an area of ​​more than 300,000 mu.

The endowment of green ecological resources has promoted the development of local green industries.

The ecological "green" on the "red soil" is not just Camellia oleifera.

In recent years, in the context of rural revitalization, Jianchanghe Township in Xinxian County, like thousands of inland villages in China, has cultivated a number of green industries to promote economic development and increase farmers’ income.

"In recent years, we have sowed a lot of green seeds." Hu Mian, Secretary of the Party Committee of Jianchanghe Township, Xin County, introduced that after planting structure adjustments, the village has built a thousand mu of yellow peach garden, a thousand acres of tung tree garden, and a thousand acres of oil tea garden. And a batch of green industrial parks such as Thousand Mu Wu Tallow Garden.

Among them, the Huangtao Industrial Park in Jianchanghe Township is a large-scale fruit industry ecological demonstration park and one of the key engineering projects in Xinxian County.

About 500,000 new varieties of peach seedlings are planted in an area of ​​about 1,000 acres by the Yangchong Reservoir Lake in Jianchanghe Township.

When the peach blossoms are everywhere in spring, it will attract a large number of tourists and photography enthusiasts.

The picture shows the old revolutionary base Xinxian County, Henan.

The summer is in full swing, and the peaches are ripening.

At present, Jianchanghe Township has formed a rural whole-area tour with red education as the main line and eco-tourism such as pastoral picking and farmhouse accommodation as the backing.

Walking along the Jianchang River, the reporter felt the lush green of Dabie Mountain in summer, and the fresh air with the smell of grass caressed his face.

The fellow traveller said with emotion, “Stepping on the red land, breathing the green air, and immersively experiencing, “Under the east fence of picking chrysanthemums, some people see Nanshan”.

Statistics show that in 2020, the county will receive 9.265 million tourists and realize a comprehensive tourism income of 6.93 billion yuan.

Under the integration of "red and green", the rural group of Dabie Mountain, represented by Jianchanghe Township and even Xinxian County, is moving towards the "fast lane" of revitalization step by step.