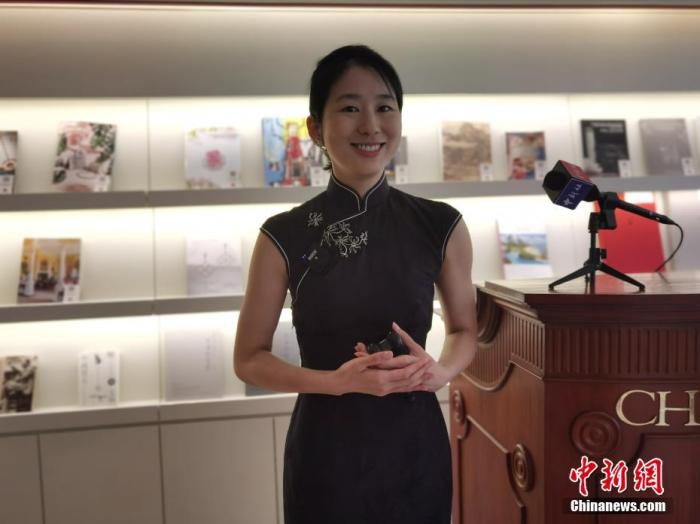 Appropriate cheongsam, fluent Mandarin, sweet smile, talking eyes, when these elements are brought together in a female auctioneer, she-Christie's Hong Kong vice president Chen Liangling, because of her wonderful performance in the recent Christie's spring auctions, Unexpectedly, it became popular.

The picture shows Chen Liangling accepting an exclusive interview with a reporter from China News Agency.

When Chen Liangling accepted an exclusive interview with a reporter from China News Agency a few days ago, she still wore a cheongsam, showing grace and dignity: "I am surprised that so many friends like to watch our auction video. Thinking about it, it is actually quite good, because it can let everyone know more about it. We auction this industry."

Although in the public perception, auctioneers are men’s professions, Chen Liangling believes that auctioneers’ gender is not that important. “Our company has 54 auctioneers around the world, of which 26 are women, which should account for the highest proportion of auction houses. "Chen Liangling, who was born in Taiwan, said frankly that she came into this line by mistake: "When I was very young, my parents would take me to the National Palace Museum in Taipei and tell me which porcelain was from Ding Kiln or Ru Kiln. Mao Gongding.” But after graduating from elementary school, she went to New Zealand and the United States to study.

When she returned to the National Palace Museum in Taipei as a volunteer guide for more than a year, her mind changed: "I think this is really interesting, maybe this may become a career." She enrolled in a course at Christie's Academy of Fine Arts in London. Become an auctioneer at Christie's Hong Kong.

"It feels quite nervous when I really set foot on the auction stage. I remember that the first time I auctioned, I missed a whole page of the lot. Another time I found out that I forgot to bring the auction mallet before I went to the stage." Chen Liangling talked about her debut in 2017. "Embarrassment" covered her mouth and laughed, but two years later, in the 2019 Christie's spring auction, she sold Wen Zhengming's hand-rolled seven-character poem at a price ten times higher than the starting price.

The picture shows Chen Liangling looking through a collection of porcelain lots.

Chen Liangling believes that in addition to professionalism and other basic requirements, a good auctioneer is also very important for concentration, affinity and even physical strength.

"Because when you are on the auction stage, you really have to be fully focused, because the bids may be on-site or on the Internet, and there are also telephone commissions. This is absolutely not to be missed. You need to have some eye contact with the buyer. , I will confirm with him again in the gesture, is it really sure to not increase the price? Sometimes such emotions may be conveyed to the buyer, which is why the auction is so attractive."

"The auctioneer is definitely not just a hammer on stage, he must be proficient in a certain field of art." Chen Liangling, who is also a senior expert and director of Christie's Hong Kong China Porcelain and Art Department, devotes more energy outside the auction season. For research in the professional field, she and her colleagues frequently travel between the mainland of China and Hong Kong, and have visited many famous museums in the mainland.

"When I used to read martial arts novels, I always felt that I was the person in it, able to do what is right, and draw swords to help." She also told reporters that she likes watching "Swordsman" and "The Eight Books of the Dragon" most, and Xiao Feng is her most recognized hero.

Chen Liangling believes that as a place where Chinese and Western cultures blend, Hong Kong has many advantages. “The Hong Kong auction market is characterized by a combination of Chinese and Western. The style of Christie’s Hong Kong actually combines the traditional Christie’s European and American styles, and at the same time incorporates some of the mainland’s auction characteristics. Porcelain. It was invented in China, and it can especially represent Chinese culture. It has always been favored by collectors and I believe it will be better in the future." (End)