Always dazzling and sometimes stunning. That the queen of the Netherlands likes fashion is obvious because her wardrobe is huge, she invests in sewing models for women 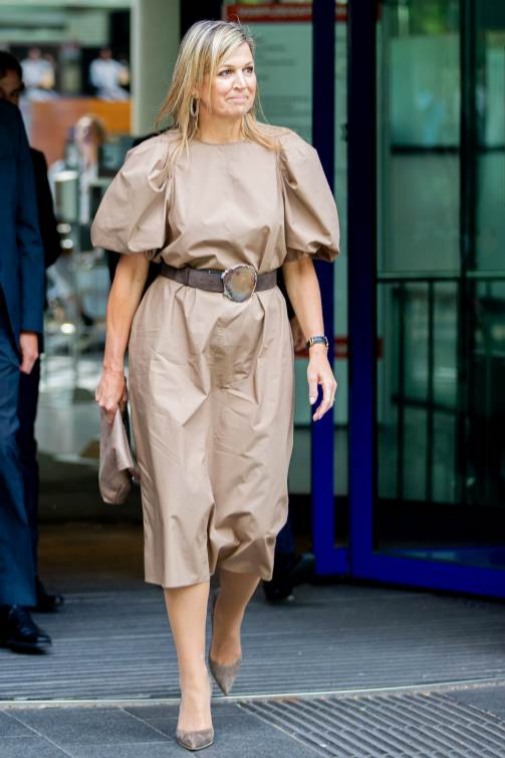 That the queen of the

likes fashion is obvious because her wardrobe is huge, she invests in sewing models for the big galas, like those of the Dutch designer

based in Madrid, and she takes risks with her looks.

She loves strong colors (orange, the symbol of

is one of her favorites), dresses with large volumes, XL accessories and hats, headdresses and turbans, like those of

which she wears with confidence.

The Queen Máxima, last year, with the dress that she has recycled again..Gtres.

The same mastery shows when she wears tiaras and jewels of enormous value belonging to the jeweler of the Dutch royal house.

Everything looks to her.

so admired outside her country for her generous smile, her attractiveness and her always cheerful appearance, is criticized indoors for her excessive spending on foreign brand clothing:

Valentino (who made her wedding dress) , Chanel, Natan ...,

which make up most of her wardrobe.

She is also accused of not giving sufficient visibility to the fashion of Holland, being able to become its best ambassador.

But, just as she chooses an expensive haute couture creation of great technical complexity, like the one by

that she wore for her

, a model in beige poplin with puffed sleeves, which costs 49.99 euros in the online store of the Swedish giant. Yesterday he put it on again for a virtual meeting with representatives of

which has an annual allocation of more than 1.1 million euros approved by the Dutch Parliament, is a 'bonne vivante', possessing a strong personality.

From her childhood in

through her career as a bank executive in

her life has been intense and not without dramatic episodes.

The kings of Holland and their daughters, Alexia, Ariane and Amelia with Queen Emerita Beatrice during the celebration of the sovereign's 50th birthday in The Hague.

She wore an Iris van Herpen creation and gaudy jewels of diamonds and emeralds.

who was a senior agricultural official during the last Argentine military dictatorship, the Dutch Parliament did not allow him to go to Amsterdam for his daughter's royal wedding in 2002 with the then

which caused her an enormous sadness.

He was also unable to subsequently attend the coronation ceremony, in which

Another extremely painful episode for the monarch was the suicide of her little sister,

at age 47, which occurred in Buenos Aires.

Thanks to her spontaneity and sympathy, and her involvement in social causes,

has been winning over the Dutch people, but her popularity has decreased considerably in recent times due to her behavior during the pandemic.

Recently the royal couple apologized on

for a vacation in

where they own a villa, in which they did not respect the restrictions imposed by the covid.

Always attractive, her wardrobe is spacious and colorful. Gtres.

Much commented has also been the monetary allocation to

heir to the throne, who will have 300,000 euros when she comes of age in December.

You will also receive a supplement of 1.6 million euros for personal expenses.

in the United Kingdom.

Hats, headdresses, turbans and pamelas are a constant in their public appearances.

Who wears it better?

The message behind Rocío Carrasco's sandals in the final episode of the documentary 'Rocío, tell the truth to stay alive'