Her Highness Sheikha Latifa bint Mohammed bin Rashid Al Maktoum, Chairperson of the Dubai Culture and Arts Authority (Dubai Culture), stressed the need to exert every effort in order to optimally complete the project to develop the creative district of Al Quoz in Dubai, according to the vision of His Highness Sheikh Mohammed bin Rashid Al Maktoum. vice president 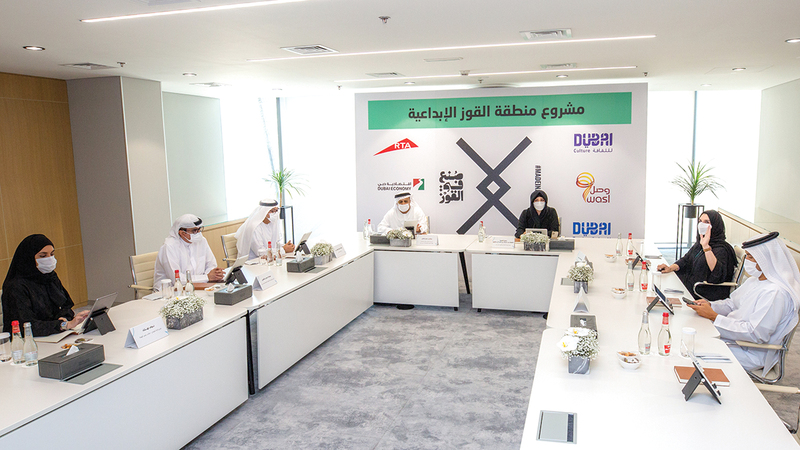 Her Highness Sheikha Latifa bint Mohammed bin Rashid Al Maktoum, Chairperson of the Dubai Culture and Arts Authority (Dubai Culture), stressed the need to exert every effort in order to optimally complete the project to develop the creative district of Al Quoz in Dubai, according to the vision of His Highness Sheikh Mohammed bin Rashid Al Maktoum. Vice President and Prime Minister of the UAE and Ruler of Dubai, to make Dubai the capital of the global creative economy, a first destination for innovators, and the best city for life and work in the world, expressing its full appreciation for the contributions of all members of the Higher Committee and the executive teams of the project, and its confidence in their ability to implement it fully.

This came during the chairing of Her Highness Sheikha Latifa bint Mohammed bin Rashid Al Maktoum, the first meeting of the Higher Committee for the Development of Al Quoz Creative District in Dubai, in the presence of the Director General, Chairman of the Board of Executive Directors of the Roads and Transport Authority, Vice Chairman of the Committee, Matar Mohammed Al Tayer, and members of the Committee: Director General of Economy Dubai Sami Al Qamzi, Director General of Dubai Municipality Daoud Al Hajri, Director General of the Department of Tourism and Commerce Marketing in Dubai (Dubai Tourism) Hilal Saeed Al Marri, and Director General of Dubai Culture Hala Badri. During the meeting, Her Highness Sheikha Latifa bint Mohammed bin Rashid Al Maktoum approved the governance system for the Al Quoz Creative District Development Project, which defined the work teams that will implement all its stages, and the goals and indicators of the 100-day plan to implement its first stages.The meeting discussed the best ways to manage the project, which aims to develop an integrated creative system in the Al Quoz region, to meet the requirements of innovators and cultural and creative entrepreneurs wishing to invest in the creative economy, and to enhance the value of this region as a regional and global center for incubating creators for production, living and entertainment.

Her Highness Sheikha Latifa bint Mohammed said: “We have in our hands a pioneering project with lofty goals that we want to be the best model par excellence, not only at the local level, but also at the global level. We have a clear vision to complete this unique national project in a way that lives up to the ambitions of His Highness Sheikh Mohammed bin Rashid Al Maktoum, whose style of work is inspired by his approach to leadership and his forward-looking philosophy in creating the future. We are very confident that all members of the committee will continue to make maximum efforts to implement the project to the fullest, leading to a tomorrow in which Dubai will lead the global cultural scene, becoming a center for the creative economy and a destination for creators.” During the meeting, Her Highness was briefed on the project management proposal, which is supervised by the Higher Committee for the Development of Al Quoz Creative District, including the work teams that will implement all its phases, including: the project's executive team, and the portfolio teams of Al Quoz Creative District development projects. The executive team includes Hala Badri, as the team leader.

Her Highness Sheikha Latifa bint Mohammed stressed the importance of the role played by all team members, and the need for coordination and cooperation among them, in a manner that embodies the approach of joint work, the spirit of one team and the integration of roles, whose rules were established by the wise leadership in government work, which has long been one of the most important elements of prestige. prestigious position that Dubai has achieved at various levels.

The comprehensive 100-day plan identifies the priorities of the teams’ work to develop the creative Al Quoz area, and sets goals and indicators for it. Infrastructure priorities included conducting a comparative study to review examples of similar areas that combine living, working, and creative public spaces, and developing a model for distributing different uses in the same area. And submitting recommendations to the Supreme Committee, as well as defining activities related to the creative industries sector, and the necessary permits in Al Quoz Creative District.

For his part, Mattar Al Tayer said: “The adoption of the project’s governance system and the indicators of the 100-day plan is an important stage in transforming Al Quoz Creative District into an integrated center that attracts creators from all over the world, and makes it an artistic and cultural destination for tourists and visitors from inside and outside the country, which achieves His Highness Sheikh Mohammed bin Rashid Al Maktoum’s vision to transform Dubai into a global capital for creators, noting that “art and culture are considered a global language for peoples to communicate.”

He added, "The Roads and Transport Authority supports the Al Quoz Creative District, with a package of projects that contribute to facilitating the movement of residents and visitors to the area. The authority will also work to add an aesthetic and creative character in the various facilities and means of transportation, which it will implement in the area, to be consistent with the design identity of the components of the region." ».

For his part, Sami Al Qamzi said: “We look forward to moving forward with the implementation of the Al Quoz Creative Development Project, in an optimal manner that befits Dubai’s position and role in the cultural sector in the region and the world, in line with the directives of the leadership.” He added: “We in Dubai Economy are committed to providing And to employ all our capabilities, expertise and human resources, in order to achieve the maximum degree of cooperation, coordination and partnership with various relevant government and private agencies, to ensure that the visions and goals set for this project are translated into a tangible reality that contributes to the consolidation of the position of the creative economy in Dubai.”

While Daoud Al-Hajri said: “We seek to achieve the vision of His Highness Sheikh Mohammed bin Rashid Al Maktoum, for the future, by employing all the resources and elements that guarantee a qualitative leap in all areas of creativity, and work according to the finest strategies and plans, to enrich this exceptional project, in cooperation with All partners, and our goal is for Al Quoz Creative District to be a beacon for every creative and educated person in the world.”

For his part, Hilal Al-Marri said: “Dubai has succeeded in resuming many different activities and sectors, with its keenness to adhere to the precautionary measures, which made it a successful model for other global cities,” noting that “the city is working to accelerate the pace of work in various strategic initiatives. Including Al Quoz Creative District.

For her part, Hala Badri said: "It is an ambitious new journey in which our efforts are combined to consolidate Dubai's position as a global center for culture, an incubator for creativity and a forum for talents, and to enhance its creative economy, based on the visions and ideas of the creative community, in order to achieve their interests and the prosperity of their businesses."

Hisham Abdullah Al Qassim, CEO of wasl Asset Management Group, said: “We are pleased to provide the necessary support for the Al Quoz Creative District development project, especially as it belongs to the category of qualitative projects that represent pillars of Dubai’s position as the capital of the global creative economy and the first destination for creatives.”

• “The lofty goals of a pioneering project, which we want to be the best model par excellence in the world.”

• "We appreciate the efforts of the members of the Higher Committee and the executive teams of the project... and we trust their ability to implement it to the fullest."

• «The project makes Dubai an artistic and cultural destination for tourists from inside and outside the country».

• «We look forward to moving forward with the implementation of the project in a manner befitting the position and role of Dubai».

• “Our goal is for Al Quoz Creative District to be a beacon for every creator and educator in the world.”

• "Dubai has succeeded in resuming many activities, which made it a role model."

• "A new ambitious journey in which our efforts are combined to consolidate Dubai's position as a global center for culture."

• "A qualitative project that represents a pillar that consolidates Dubai's position as the capital of the global creative economy."

Infrastructure priorities also included the requirements of flexible mobility, from launching the service of transporting visitors from Al Safa metro station to Al Quoz Creative District, through developing the initial design for guiding signs for pedestrians and individual users of individual transportation, to launching and awarding consultancy services (study and design) for the elements of transportation integration and flexible mobility. In Al Quoz Creative, renaming the streets in the area, ending with communicating with land owners in the targeted area, and motivating them to provide units for the benefit of the beneficiary groups.